Breitbart Unafraid To Ask: Why Is Oprah Winfrey Such A Racist Liar? 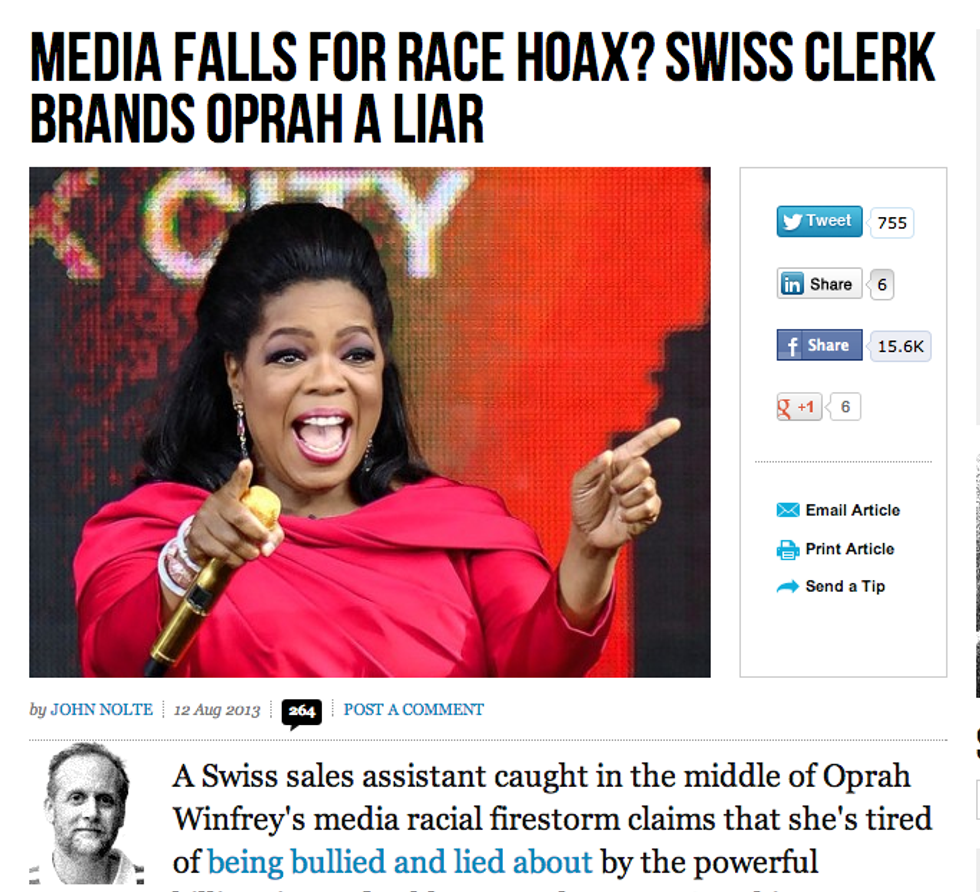 Did you know Oprah Winfrey "jumped into" the George Zimmerman trial, and she also has a movie coming out, and these two facts bond and twist together into a double helix of bad intent to make her the Greatest Race Hustler since the time Barack Obama was born in Kenya and dined alone, and also she is a bully and A Liar?

Well John Nolte, a resident of Ghost Andrew Breitbart's Internet Home for the Criminally Peevish, knows this, and brings you some Words bout it.

You see, recently Oprah said a shop clerk in Switzerland had refused to show her the kind of purse that should have been immediate grounds for execution in any sane world, as it was $38,000 and "too expensive" for her. For Oprah. Yeah, you probably heard about that.

But the clerk? DENIES IT. And says it NEVER HAPPENED. Probably because she is real mad that the entire country of Swisstown is mad at her for embarrassing it with her Magical Profiling of the Africkan-ess. And that? Is enough for Ghost Andrew Breitbart!

First, Nolte excellently sets the stage for us:

A Swiss sales assistant caught in the middle of Oprah Winfrey's media racial firestorm claims that she's tired of being bullied and lied about by the powerful billionaire and cable network owner. Speaking anonymously, the sales clerk Oprah has publicly accused of racism for not showing her a $38,000 handbag told a Sunday newspaper, "It is absolutely not true that I declined to show her the bag on racist grounds. I even asked her if she wanted to look at the bag."

This directly contradicts an anecdote Oprah relayed to Entertainment Tonight in which she told America that the clerk's response to her request to see the handbag was, "No, it's too expensive."

For its part, the American media never showed the moral courage to express any skepticism towards one of the most wealthy and powerful people in the world. The story was just too good, I guess, and Oprah just too much of a sacred cow -- a close friend of Barack Obama's, black, leftist, an actress, and a woman.

But did the media even wonder for a moment how a potentially exaggerated, racially-charged anecdote of this kind might help to sell Oprah's upcoming film, "The Butler?" It was, after all, during the publicity blitz for "The Butler" that Oprah first told the story.

Did no one in media wonder if such an anecdote mixed with the promotion of a film based on a racial theme might be a little too neat?