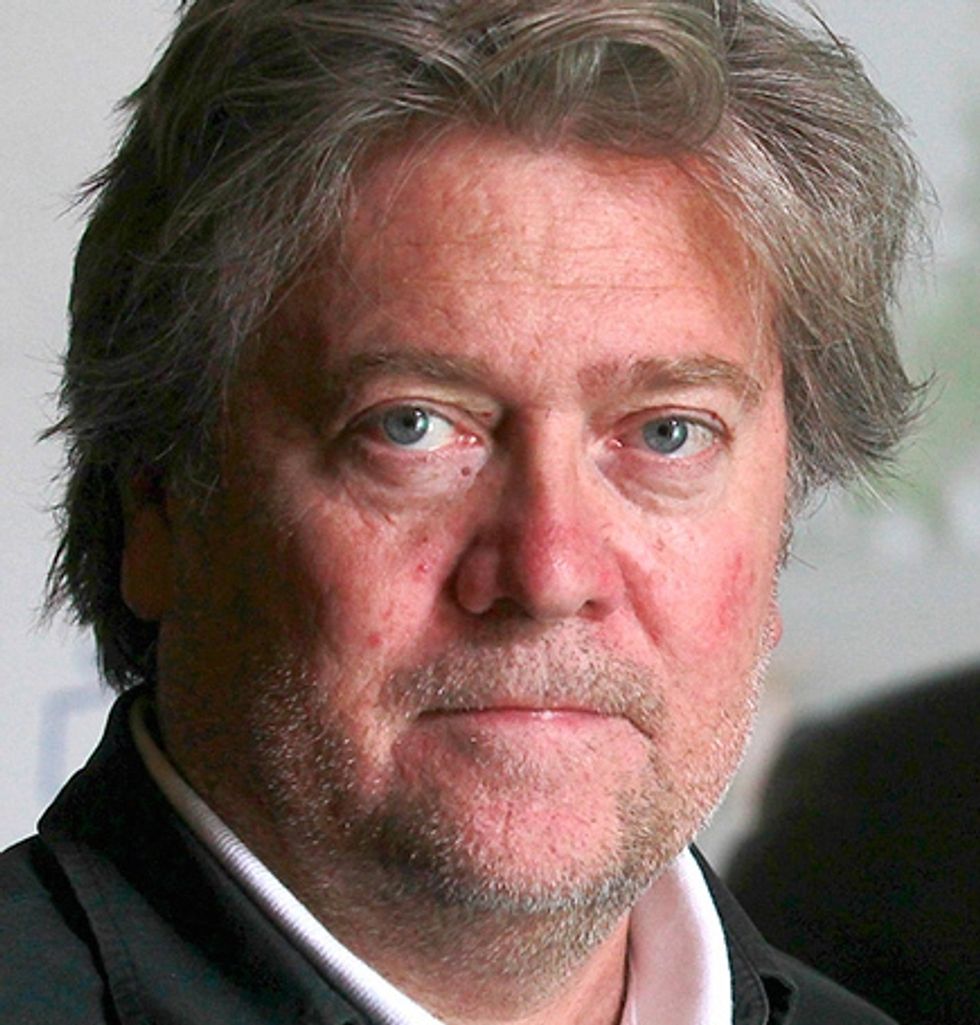 Definitely the platform, but not the premier. What about the person and the agent?

For a several days now, the nice folks at Dead Breitbart's Loon Sanctuary have had a severe rash over the Anti-Defamation League's condemnation of former publisher Steve Bannon, because, the Breitbartians insist, no way is Bannon an anti-Semite, nuh-uh! They've published at least two pieces claiming the ADL has "backed off" mean things it said about Bannon, so therefore Steve Bannon is vindicated forever, hooray! In one, editor Joel Pollack offers a lawyerly reading of an ADL "Five Things to Know" piece about Bannon, smugly insisting that the ADL's caveat that the group is "not aware of any anti-Semitic statements from Bannon" completely clears him of any association with bigotry (the piece does obliquely note "controversy" over his ex-wife's claims during divorce proceedings, but doesn't specify she said he didn't want their children going to school with Jews.)

The other piece is an astonishingly hair-splitting article excitedly announcing what sounds like a total capitulation by the ADL:

Except it's not so much about the ADL retracting anything (it hasn't) or apologizing for mischaracterizing Breitbart (again, no such thing). Instead, it's a surprisingly overheated account of Breitbart "reporter" Adele Nazarian confronting ADL president Jonathan Greenblatt and trying to get him to admit he's wrong, wrong, wrong about calling Breitbart.com the “premier website of the Alt Right.” Because, you see, it's nothing of the sort! Here's a sample of their partial transcript:

Nazarian: The ADL has also claimed that Breitbart News is the premier alt-right site. And that Steve Bannon is “the chief curator of the alt-right.”

Nazarian: That’s also not true, though.

Greenblatt: What do you mean?

Nazarian: It’s not true that — Breitbart News is not the premier platform for the alt-right.

Nazarian demands a retraction, or at least a restatement; Greenblatt is having none of it, and reads an excerpt from a National Review piece about Bannon:

Nazarian is delighted to have caught Greenblatt in his perfidious lie: "So, his statement is different than the ADL stating that it is the 'premier' site for the alt-right."

Then ensues a lengthy -- one might even say Talmudic -- debate over whether "the platform for the alt-right" is substantially different from "the premier site for the alt-right," and if we'd been Mr. Greenblatt, we'd have pointed out that Bannon used an unqualified singular there: it's THE platform, not one of several. And then we'd take issue with both versions -- as did Pollack -- since probably the hardcore 'alt-right' idiots are more likely to hang out on 8chan or Stormfront. It's probably most accurate to say Bannon made Breitbart.com the vehicle for mainstreaming and making excuses for the alt-right. Maybe if Greenblatt had simply called Breitbart a gateway drug to the "alt-right" everyone would be cool with it.

The clash of intellects continues:

Greenblatt: So am I wrong about what the alt-right is, do you think? Is the alt-right not about white nationalism? Now, I’m just going to ask because I want to make sure I get this right with you.

Nazarian: Sure. Breitbart News is not the premier site for the alt-right though. That’s what I’m asking for you to clarify, to correct.

Nazarian: May I look up the definition of premier?

Greenblatt: Sure. It probably means leading, I would think, or number one, or something.

Greenblatt: But I get it. Premier means, like, “leading.” So, he said it was “the platform.” We said he made it “the premier website.” So, respectfully, if you’d like, I could say — where is that quote? Just read back what Steve Bannon said. So, in his own words, “it’s a sad day when a man who presided over the premier” — I’m sorry — “the platform.” I mean, if you want me to say it that way, I can. But all I’m going to do is quote from him. Not from myself.

Oh! Did you see how he backed off and admitted defeat there?! They got him! The head of the ADL himself admits Bannon never said "premier," and so he is exonerated for all time, and the ADL admits it lied! HAIL VICTORY!!!!

So thank Crom they got that cleared up. The ADL, incidentally, has still not changed its statement on Bannon, leaving it as:

"It is a sad day when a man who presided over the premier website of the Alt Right, a loose-knit group of white nationalists and unabashed anti-Semites and racists - is slated to be a senior staff member in the 'people's house,' said Jonathan A. Greenblatt, ADL CEO.