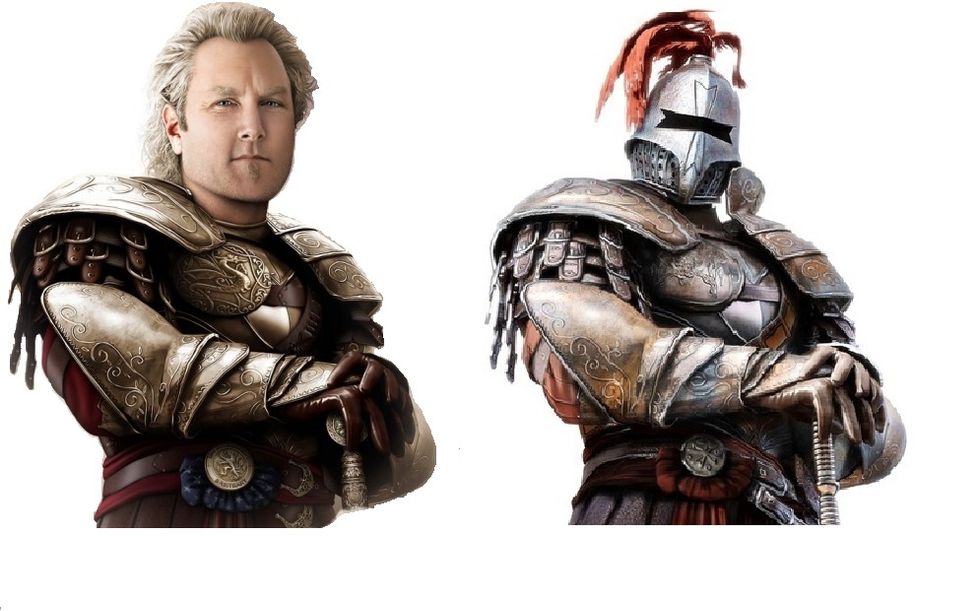 Communications theorist Howard Rheingold coined the term "smart mobs" to describe the potential for technology to bring people together in empowering, creative ways to do good in the world. Consider if you will the Twitter Revolutions in Tunisia and Egypt, for instance. Or, closer to home, the Great Justice that resulted when a bunch of nerds noticed that a tacky artistic tribute to dead poopyhead Andrew Breitbart was mostly filched from a promotional image of a downloadable character for the 2010 video game Assassin's Creed: Brotherhood.

Within mere hours of Your Wonkette's story about the possible copyright infringement, (helped along by a re-embloggening by gaming site Kotaku), the image had vanished from the Patriot Depot website, which had been taking orders for versions ranging from $9.95 for a set of postcards to $3999.95 for a signed, framed print on canvas. And by the end of the weekend, the artist responsible for the Breit Knight image, David Bugnon, had issued an apology on his website:

Regarding the Andrew Breitbart picture

I started it on the day he died. I thought Andrew was a warrior for the truth and I was very sad to hear of his passing. I was inspired to do a photo “chop” tribute for Andrew. Photo “chopping" is an artform, it’s what I do. I never intended to market the picture and did not want to refer to it as a painting (it’s a photo manipulation in combination with illustration and rendering), and I never put a price tag on it, I was just going to post it on Freaking News for a Photoshop contest. My main error in judgement was signing a release for it to be sold, (50% of the proceeds were to go to the Breitbart children’s fund). I sincerely regret my decision and apologize to everyone involved, those that pre-ordered, and those offended by the use of a portion of the copyrighted image.

Fair enough, although we think "doubled over in disbelieving laughter at such clueless ballsiness" describes our reaction more accurately than "offended." Bugnon explains that accusations of mere cutting-and-pasting are just totally unfair, come on, REALLY you guys are so mean:

I did not just plop Andrews head on the knight image, I worked on it for months in my spare time, re-creating every belt, rivet, cloth item, leather armor and did much cleanup and rendering to the metal armor. It was totally re-worked. I kept the pose and look of the knight image, because I liked it and tried to mimic it. Also, every hair and whisker on the head was re-created, the skin and eyes too. I’ve learned an important lesson and will be very prudent in selecting my source images in the future.

Let us be clear: there was no plopping. Of this apologia, Wonkette commenter Chet Kincaid says, "That is one of the saddest, most pathetic things I have ever read on the Internet."

Also noteworthy is the craftsman's doting devotion to his brainchild -- sure, he kept the "pose and look" of the source image (and the curlicues, and the pleats, indeed ALL the basic elements of the design), but he added a bitchen dragon on the chest, and made a cool new sword, and fancy (backward, girly) belt buckles, and turned the sash into patriotic flag-patterned bunting, and he's lived with it so long that it's his, really, isn't it, kinda? And who knows, maybe it actually is -- when such questions of "Fair Use" get as far as an infringement lawsuit, one of the elements courts look at is the degree to which the new work is "transformative" of the original. One suggestive example that Mr. Bugnon may wish to read up on involves an image that, as a conservative, he may already be familiar with. To help readers appreciate the fine details in the image, Mr. Bugnon will, "for a few more days," host an impressively large version on his website.

Finally, corrections and acknowledgements: Our original story mistakenly cited the awesome Mock, Paper, Scissors as the first to identify the similarity between Heavenly Breitbart and the Assassin's Creed knight. As it turns out, that comment was posted by DC Martin, proprietress of the equally awesome Pass The Doucheys On the Right-Hand Side, after one of emi>her commenters, "thebewilderness," actually found what we're pretty damn sure was the real "FIRST!", a comment by "greylocks" at yet another awesome progressive blog, Lawyers, Guns, and Money. Lastly, a shout-out to TBogg at Firedoglake, who had the most awesomest re-photoshoop Breitbart contest on the web.

The takeaway: Don't copy shit from videogames. Gamer geeks are out there. They can't be bargained with; they can't be reasoned with. They don't feel pity, or remorse, or fear (that's the Asperger's). And they absolutely will not stop, EVER, until you are RIDICULED ON A BLOG.