Brian Williams Takes Break From Nightly News, Will Try To Remember Not To Show Up Anyway 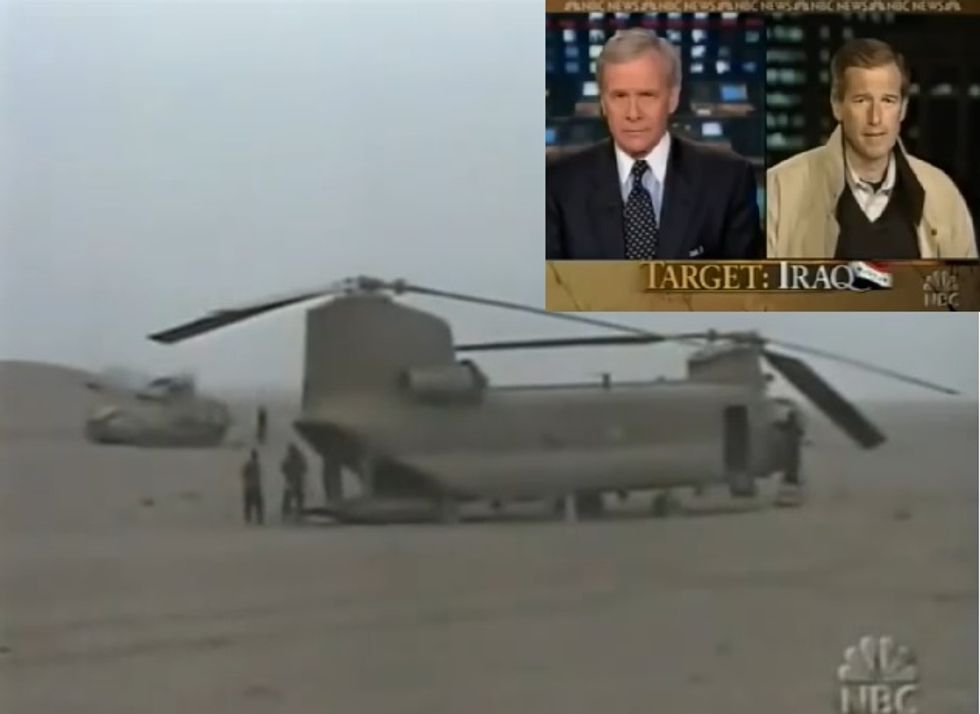 After apologizing for saying he'd been aboard a helicopter that was hit by a rocket-propelled grenade in 2003, Brian Williams announced this weekend that he is taking himself off the NBC Nightly News for several days because "it has become painfully apparent to me that I am presently too much a part of the news, due to my actions." Yes, maybe just a little. Our favorite part of the whole brouhaha is seeing Williams called an outrageous liar by rightwing blogs that have spent years insisting Barack Obama is a probably-Muslim illegal alien who instituted a socialist government takeover of health care that includes death panels. The real question, of course, is whether it was Brian Williams who gave the stand-down order in Benghazi.

As Williams accurately reported in 2003, he had actually been in another helicopter that was on the same mission as the CH-47 Chinook that was hit, but which was traveling well behind it:

Williams's story morphed over the years, as detailed in an essay by NPR media reporter David Folkenflik. As he retold his harrowing tale -- not on news broadcasts, but in other situations -- his version of where he was that day shifted from riding in the second helicopter to actually being on the one that was forced down.

Williams's apology last week, in which he said he misremembered the events, has been widely mocked, especially on the right, where it's proof that you can't believe a single word reported in the liberal media. After all, on Fox, when they lie, they never apologize, except for that one time last month about Muslims-only "no-go zones" in Europe.

And now the game is to scrutinize the details of virtually everything ever said by Brian Williams -- if that is even his real name. Did he really see a body floating by the Ritz Carlton hotel after Hurricane Katrina in 2005, and did he really get dysentery from the floodwater, or just an upset tummy? For that matter, why wasn't he more vigorous in criticizing Barack Obama's mishandling of Katrina?

Our favorite permutation is a story in Huffington Post today, with "longtime residents" of Red Bank, New Jersey, saying they doubt a Williams anecdote about having been robbed at gunpoint in their fair city. In 2008, Williams told New Jersey Monthly that while he was in high school, he'd been robbed while selling Christmas trees:

“There wasn’t a lot of money at home, so I had to pay my own tuition to Mater Dei,” Williams says. “I was a busboy at the Perkins Pancake House on Route 35; I worked at Sears, which was right near our house. I even sold Christmas trees out of the back of a truck in Red Bank. That wasn’t a bad job, until a guy came up and stuck a .38-caliber pistol in my face and made me hand over all the money. Merry Christmas, right? Of course, I suddenly appreciated the other jobs I thought I hated.”

No way could that have happened, said people whose expertise on the event apparently consists of having lived in New Jersey in the 1970s:

“I find it hard to believe anyone was held up in this area in the ’70s. It was very safe," Danny Murphy, former owner of Danny's restaurant, told Pagesix.com.

"I doubt he was robbed at gunpoint," Les Carbone, 85, told The Daily Mail. "I was born in Red Bank, there were no crimes like that. Tell Brian Williams to stop lying.'

No proof refuting Williams' story of the alleged mugging has surfaced.

Hey, while we're casting doubt on the accuracy of journalists' stories, let's point out that Les Carbone, 85, said nothing of the sort to the Daily Mail. Mr. Carbone's comments actually came from the same New York Post/Page Six story as that other quote from Danny Murphy; the Daily Mail makes it quite clear that it's quoting the Post. But now it looks like HuffPo has found two separate tabloids that cast doubt on Williams's story from high school. Also, Williams may not have gotten to third base with a cheerleader named Janet in the back seat of a '71 Malibu; those who know him insisted that at the time he was still driving his dad's Rambler American, and no way was Janet a cheerleader -- she was on the flag squad.

Yr Wonkette is actually inclined to believe Williams's explanation that the story grew in his memory from "riding along on a mission where a helicopter got hit by an RPG" to "riding on a helicopter that got hit by an RPG." As any number of studies have shown, memory is pretty damned unreliable. David Folkenflik's piece notes a 2011 Harvard study that argues memory is "prone to distortions that can have serious consequences in everyday life." Basically, unreliability is a part of how memory works. And yes, yes, the anchor of a network news program has a greater duty than the rest of us to double and triple-check his facts and not rely on memory, even on talk shows. Williams really shoulda known better.

But it's definitely not "unbelievable" that he could have misremembered the events of 12 years ago. The more neurosciences learns about memory, the more fundamentally undependable it turns out to be. (As a side note, it's also entirely possible to take that too far as well -- Yr Dok Zoom used to argue with Holocaust deniers who would cherry-pick neurological research to "prove" that since memory can be unreliable, then all eyewitness testimony about the Holocaust, by both perpetrators and survivors, must be dismissed as a Zionist lie.)

One of the first things we thought of when we were talking about the Williams story in the Wonkette Sekret Chatcave was this This American Life story involving NPR science reporter Robert Krulwich, who over the years inserted himself into his wife's embarrassing anecdote about seeing Jackie Kennedy Onassis in New York City; here's a version with animation added by Chris Ware:

Son of a gun. When Rebecca mentioned that story in the chatcave, Yr. Dok Zoom remembered it immediately, although until we went to look it up, we'd forgotten that the story involved Krulwich, whose reporting for NPR should presumably now never be trusted again.

Also, you should know better than to trust anything Yr. Dok Zoom writes -- I'd have sworn that story was from Radiolab, which is hosted by Robert Krulwich.