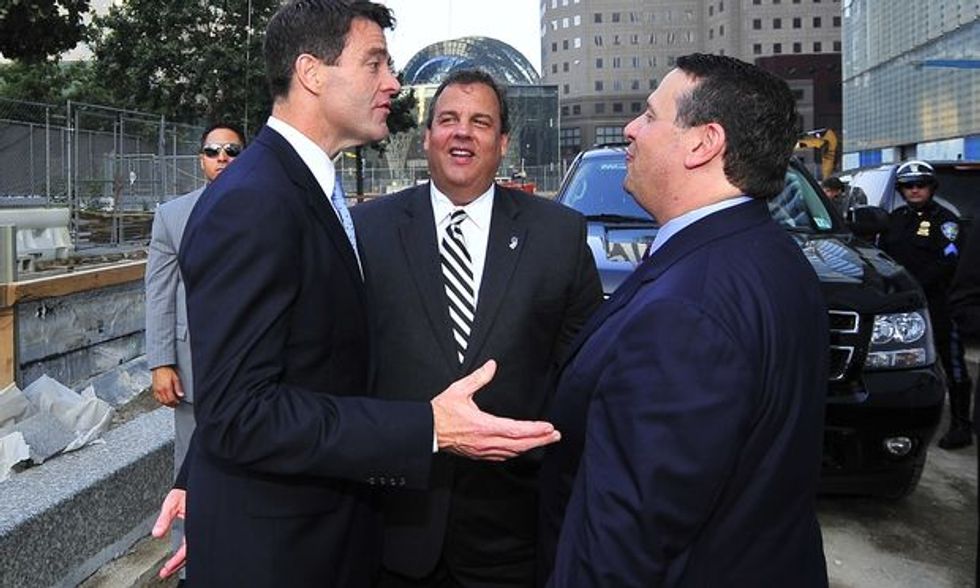 David Wildstein, who had been a senior Christie appointee to the Port Authority of New York and New Jersey, pleaded guilty to two counts of conspiracy at a U.S. district court in Newark. He was released on his own recognizance on a $100,000 bond. The judge in the case cited his cooperation with prosecutors for the release term. Sentencing is set for August.

Wildstein’s plea deal was actually signed in January, which may have given the U.S. attorneys time to get their act together for today’s indictment of the other members of Christie's Three Brusque-eteers: former Port Authority Deputy Executive Director Bill Baroni and Bridget Kelly, Christie’s former Deputy Chief of Staff. What trivial piece of political malfeasance did they fail to get away with?

Back in 2013, the three officials allegedly conspired to slow rush hour traffic from Fort Lee, New Jersey, to the George Washington Bridge by shutting down two of the town's feeder lanes. The scheme wasn’t to prevent some rugged blue-collar worker from getting to work on time, thus resulting in a firing that would inspire the greatest Springsteen song ever (with special credit given to Christie in the liner notes). Nope. Instead motorists were punished as retribution for Fort Lee Mayor Mark Sokolich’s sin of not supporting Christie in the upcoming gubernatorial election.

In his allocution, Wildstein admits conspiring to punish Sokolich. This includes the crew's decision to pick the first day of school as the first day for the lane closures in order to achieve Maximum Dickishness.

While the U.S. attorney would not comment on related investigations or anything regarding the governor, Wildstein has consistently maintained that Christie knew about the closures (which at least shows Wildstein doesn't think we're all total idiots).

Christie's response is probably, "David Who? Oh you mean the guy I went to high school with and appointed to a $150,000/year. Port Authority position? Yeah, I vaguely remember the name. But he sat with the nerds while I sat with the jocks and dated Brooke Shields." Or something.

This is a real shame for Christie, because even though there's nothing from the U.S. Attorney's office indicating Christie knew about it, and a bipartisan legislative panel found in December that there was no "definitive" proof that he was involved, it still doesn't help Christie's presidential aspirations to have his cronies admit they were running this criminal scheme right out of his office. What poor timing. Didn't you just feel the presidential star of this plucky everyman was about to take off? Didn't you? Guys? Hello?