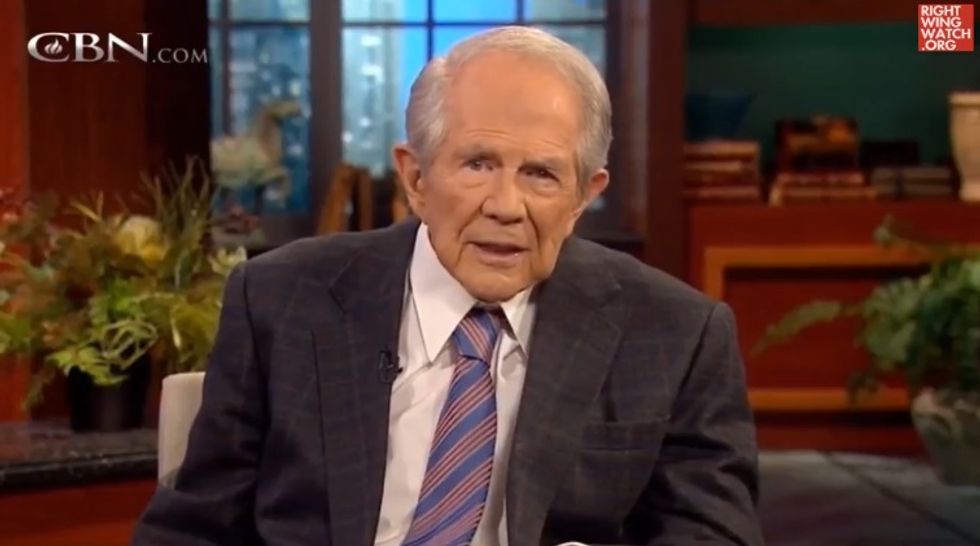 We should note that pigs remain grounded, however.

Pat Robertson, who is 1) Yes, still alive and 2) usually an ol' nasty bigot preacher but 3) Occasionally surprises us by saying remarkably liberal-ish things before returning to (2), pulled one of those surprises on his "700 Club" broadcast Monday. While he's still no fan of restricting gun sales, Robertson broke with most rightwing folks who have condemned the marching kids as naive, accused them of trying to destroy America's freedom, or called on them to do something useful like learning CPR. Instead, Robertson actually praised the kids for standing up and doing democracy:

Last month, after the mass shooting at Marjory Stoneman Douglas High School, Robertson called for a ban on assault weapons, so his nice words for the students aren't entirely unexpected. Robertson's full comments, however, were mixed: He praised the younglings' willingness to take a stand, but added that the REAL solution is more guns, too:

I congratulate these young people on taking a stand of this nature. God bless ’em. The truth is, though, gun control is not going to stop the violence; there are about 300 million guns in the possession of people right now.

Step right up and win a prize if your brother-in-law already explained this is Obama's fault!

True enough; no one's claiming any measure will be a complete cure. Robertson went on to reiterate his call for a ban on bump stocks, so shooters wouldn't have "automatic weapons" (get ready for gunsplainers to be all over that one). Then Robertson veered straight over into Donald Trump territory, right down to the phrasing:

What has been suggested as probably the answer is to have people on the other side that are armed. These terrorists are cowards, and they only want to shoot unarmed people, and all of a sudden if the people start shooting back and they get killed, then they won't want to do it as much. You know, we talk about "Peace Through Strength," and if you want to have peace, the best way to do it is to have strength. But the idea of restricting gun purchases -- it's not going to do any good.

As Sandy Hook Promise co-founder Mark Barden, whose little boy Daniel was murdered in Newtown, pointed out when Donald Trump first got all excited about arming teachers, there's a serious problem with having teachers shooting back as a panacea:

a deranged sociopath on his way to commit an act of murder in a school [...] knowing the outcome is going to be suicide, he’s not going to care if there’s somebody there with a gun. That’s their plan anyway.

While Robertson was calling for the exact opposite of what young people all over the country want, he was still pretty impressed with them, and that's worth something:

Again, I congratulate these students on getting out and protesting. God bless ’em. It’s a good step forward in our democracy.

Yr Wonkette is always happy to encourage rightwingers when they do a good thing, so two cheers for Pat Robertson here -- it would have been nice if he'd also supported the #teens' message, but his praise for their getting out and marching is more than we've seen from most on the right. He does occasionally surprise us, like that one time he very calmly accepted transgender folks exist and that having sex reassignment surgery is OK:

I think there are men who are in a woman’s body,” he said. “It’s very rare. But it’s true — or women that are in men’s bodies — and that they want a sex change [...] I don’t think there’s any sin associated with that. I don’t condemn somebody for doing that.

Yes, that really was a thing he said! Doesn't make any of his other weird nastiness -- like his warning against adopting orphans because they could be all warped and stuff -- any less weird or nasty, but we'll give him, and other conservatives, credit whenever they take baby steps in the right direction. Positive reinforcement is very important, after all, so Pat Robertson, please have a cookie. Or at least half a cookie.

Yr Wonkette is supported by reader donations. Please click here to send us money before 800-foot Jesus calls us home.