Bristol Palin: Who You Gonna Believe, Me Or This Police Audio And These Police Reports? 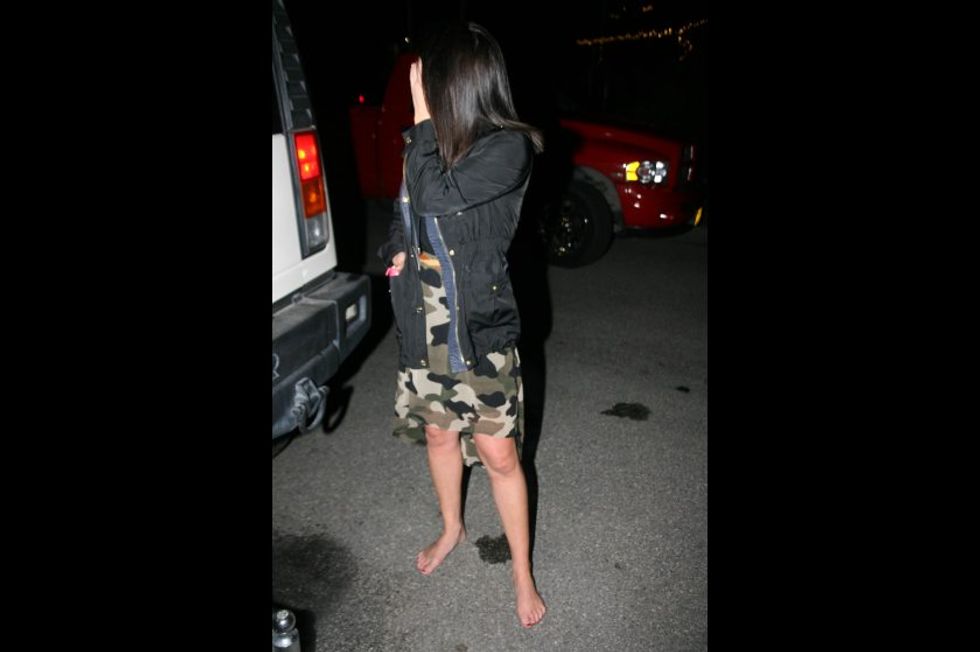 We have had some fun the past month or so with the Great Palin Mixed-Martial-Arts Demolition Derby Fisticuffs And Book Club High Tea. Well,says Bristol Palin, bruiser, that is simply unfair! You know Bristol is very very serious in her masterpiece, "The Truth about the 'Palin Brawl' – The Media Reveals Its Bias Against Conservative Women Once Again," because she "wrote" more than two sentences and a link. Why, she "wrote" many many words! So many words! Let us read some, together.

First, the media said Trig was not really my mom’s kid.

Then, they claimed my mom said “I can see Russia from my house.”

Recently, they said my parents are giving a divorce.

And now, they’re saying my family started a “drunken brawl.”

You know how your mom could have stopped them from saying Trig wasn't her kid? A little old something we call "a birth certificate." But that is neither here nor there. What is here and there is the big old "drunken brawl" your family started. You know who said that? The Anchorage Police Department. Stupid lamestream media. Also, you will want to track down the lying liar who said your face was covered in beer, since that is obviously not true. "There’s nothing on my face except for beer and makeup," said some liar who was you.

That’s why, after a month and a half of hearing rumors about myself and family, I’ve finally decided to comment about the situation. Instead of listening to all the people who weren’t there — people who claim they heard this from their cousin/brother/sister-in-law/step-daughter/long lost little brother – let me tell you what actually happened.

Sorry, we are too busy listening to all the people who weren't there, but who somehow managed to get interviewed by the Anchorage PD as "witnesses" -- as if! What a stupid police department, interviewing people who claim they heard about the Wasillabilly drunken brawl from their cousin/brother/sister-in-law/step-daughter/long lost little brother. Can't say we agree 100 percent there with your police work, Anchorage PD!

Our friend got knocked out from a cheap shot from behind. (His injury resulted in ten stitches, so it was really low.)

Why would anyone do this? Well, here’s a hint. The guy was on social media during this incident, tweeting, “about to get famous.”

That is weird that out of all the dozens of people interviewed by the APD, only your brother Track saw this happen. Maybe they forgot to interview your friend who was cold-cocked? Shoddy, shoddy, shoddy!

[We bought my dad a truck, because fambly.]

[Boring thing about some lady and Willow and I am a rad big sister.]

After I got out of the car, I didn’t get far. I never even got to talk to his mom, because a guy in his late thirties or early forties got in my face. He was towering over me – probably at 6 foot something and over 200 pounds. He puffed his chest out and started yelling.

I was alarmed that things had gotten so bad so fast. But it got even worse when this guy started pushing me. He had his hands on me, pushing me down. That’s when I swung and hit his face.

Some would say I should’ve never retaliated in defense against him, but certainly he should never have pushed a girl. It didn’t phase him. He pushed me down to the ground and kept me there.

Oh honey, apparently you were too drunk and LITERALLY STINKING OF BOOZE, per the Anchorage Police, to remember what happened. According to LITERALLY EVERY WITNESS THERE, you marched over to Korey Kucking Klingenheimer Schmidt and started whaling on him. He took it for a while because "Alaska Macho," and then pushed you away, at which point you fell down and lost your shoes, because you were THAT FUCKED UP.

I didn’t “swing and hit him seven times with a strong right hook” as so many so-called news stories have reported. After this incident, I still had a perfect manicure on all ten of my nails. Plus – I’m left handed. I wouldn’t even begin to know how to begin “swinging” at someone.

If the manicure didn't split, you must acquit! Also, you should probably sue all those witnesses for libel.

This is what I don’t understand. I have mostly stayed out of the public eye for the past few years.

I clock in and out of work – yes I actually have a job – like most middle class Americans and chip away at making my son’s life just a little bit easier. So why does the media still choose to put the Palins into an entirely different category of people? This “story” is still running over a month and a half later. Rumors still run wild, unsubstantiated claims are printed as true, and random people who weren’t even there are considered “eye witnesses.”

You should sue the Alaska PD too!

In the meantime, did you even hear about Vice President Joe Biden’s adult son who kicked out of the Navy for cocaine? (That’s the real Vice President’s kid…) So pause for a moment and consider the hysteria over our stupid “incident”, compared to our actual Vice President’s son not even being able to hold on to a position in the Navy Reserve.

Meow, Bristol Palin! Yes, in fact, we did hear about Joe Biden's adult son who did all the cocaine. You must have read about it on the Wonkette. Also too, maybe people in Methsilla shouldn't throw stones!

I’m sure you heard the happy news that Chelsea Clinton had a baby. But did you know her father-in-law and Clinton family pal Edward Mezvinsky is a convicted felon because of committing bank, wire, and mail fraud?

Of course, you didn’t. Because the friends and family of the revered liberal elite are treated like delicate China. Don’t handle too roughly. They are precious. They are off limits. Don’t push on them too hard.

It's true! Why IS the media so delicate with Hillary Clinton???

BOYCOTT ALL MEDIA! UNFAIR TO BRISTOL! TOO NICE TO HILLARY CLINTON!

Here’s the thing. Violence against women is never okay… Even if that violence occurs against conservative women. Imagine for a second the outrage that would happen if Chelsea Clinton had gotten pushed by some guy. Had she tried to defend herself, the liberal media would’ve held her up as some feminist hero.

But it wasn’t Chelsea.

It was a conservative.

And once again, the hypocrisy of the media is laid bare.

You guys! Bristol said a thing that was right! Violence against women IS never okay! So which party wants to beef up penalties and enforcement to punish men who commit it, and deter men from doin' it? And which party wants women to know they didn't get roofied, they just alcoholicked themselves into their own rape?

And if Bristol got violenced, why didn't the Anchorage Police Department charge the guy who violenced her? Man, they must really really suck. We wonder if Sarah Palin can still get troopers fired.