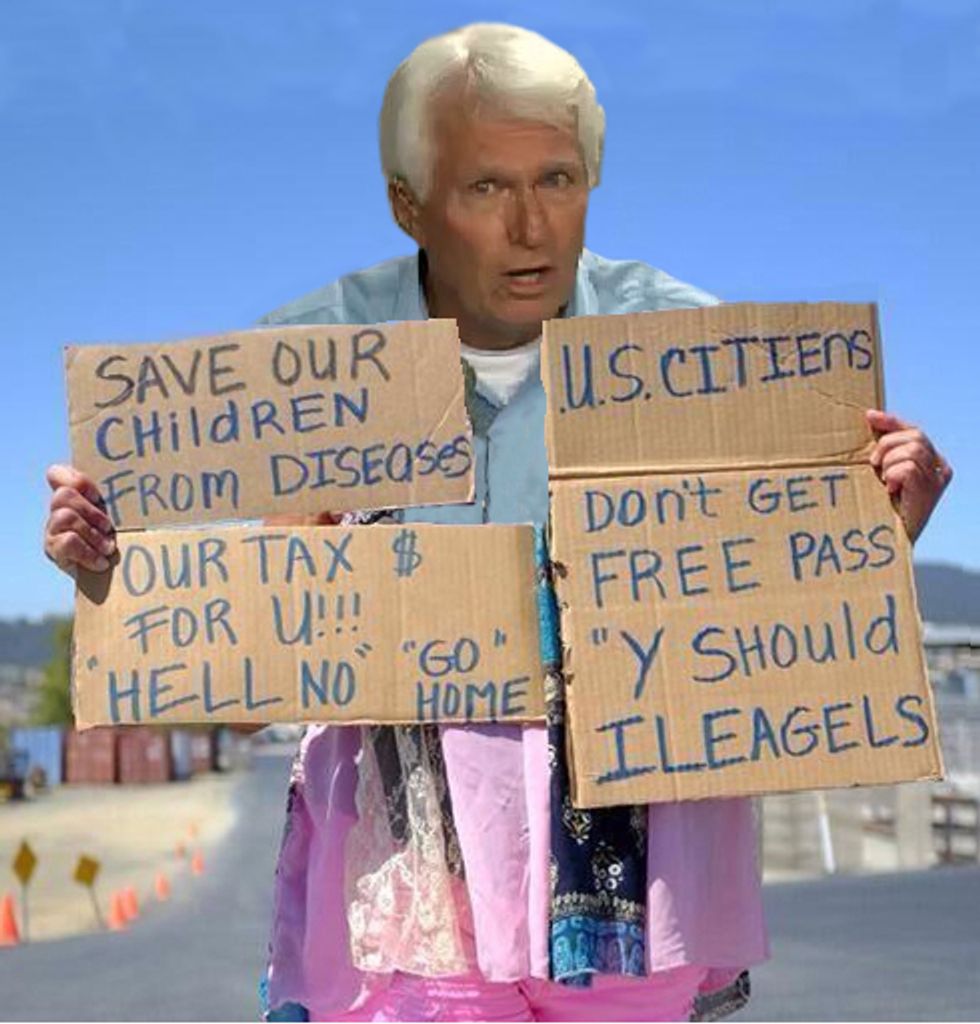 Oh, thank goodness! American Patriarchy Association radio figurehead Bryan Fischer has weighed in on theSend the Children Away Crisis, and just wants everyone to know that Jesus would want those little would-be moochers sent home pronto, and possibly for their houses to burn down, too. You see, what the stupid immigrant-coddlers don't understand is that God made the southern border of the United States, with a little help from James K. Polk and the Gadsden Purchase, and so anyone who doesn't respect that border is actually pissing off the Almighty something fierce, especially if they send their children across the border illegally for some dumb reason like "being poor" or "trying to escape a failed state," which are really not God's problem.

In a column at Matthew Barber's Internet Home for Biblically Justified Hatred, Fischer lays out the simple Biblical truth:

What we learn from the Bible is that borders are God’s idea, and that such borders are to be respected. They are not to be crossed without permission.

Crossing a border without permission is like breaking in the back door of a house to help yourself to goodies instead of being invited in by the host through the front door. You might get to eat either way, in the same house and from the same cupboard, but in one case you would be doing something respectful and civil and in the other doing something that rightly should land you in jail.

The Scriptures make it clear that national sovereignty, including clearly defined borders, is God’s idea. In Acts 17:26, we read, “And he made from one man every nation of mankind to live on all the face of the earth, having determined allotted periods and the boundaries of their dwelling place…” (Emphasis mine throughout.) [Emphasis Fischer's throughout.]

So crossing a border without permission is exactly like breaking and entering, and God would not want your children to eat stolen food, you stupid Central Americans. We're not sure what crossing a border for the purpose of asking for asylum is like -- seems to us there was this thing about Jesus saying we need to help people in need, but he was only talking about doing that as individuals, so governments should just slam the door, hard, in those kids' greedy thieving faces. And chant USA! USA! USA!

In any case, since the Bible says a whole lot about the borders of the lands belonging to the 12 tribes of Israel, it only makes sense that all borders are preordained by God, who really is a lot more interested in cartography than we ever dreamed. And if you're on the wrong side of a border, You Shall Not Pass (Gandalf 2:34). There was probably an exception for people sneaking out of East Germany, maybe, although Fischer doesn't say anything about those lawbreakers -- "The only exception," he insists, "is under circumstances of a just war," so maybe there's a Cold War permission in there too. But there's definitely no exception for these Central American children who are angering the Almighty.

While he's at it, we're looking forward to Fischer's inevitable condemnation of Congress granting a posthumous Congressional Gold Medal to Raoul Wallenberg, the Swedish diplomat who helped tens of thousands of Hungarian Jews escape the Holocaust, since Wallenberg subverted the legitimate immigration controls of both Sweden and Nazi-occupied Hungary by giving the Jews false Swedish passports. Neutral Sweden was not even at war with Germany, so it's pretty clear that Fischer's "Just War" exception doesn't apply, and the Jews should have stayed where they were. And to think that our Congress is honoring that scofflaw as a "hero!" What a doubly sad day for America.

We'd love to see a debate, frankly, between Mr. Fischer and Dallas County Judge Clay Jenkins, who is mobilizing churches and private charities in Dallas to welcome the immigrant children. Judge Jenkins also says that he's motivated by his Christian belief, saying

"these are children -- they are precious children. They're not a thing to be feared. They're people to be embraced. And people for us to help. This isn't about immigration reform, or border fences, or amnesty. This is about children."

What kind of Christian is he, anyway?

Follow Doktor Zoom on Twitter. He's no Christian, but strangely, he thinks Jesus would be awfully fond of Judge Jenkins