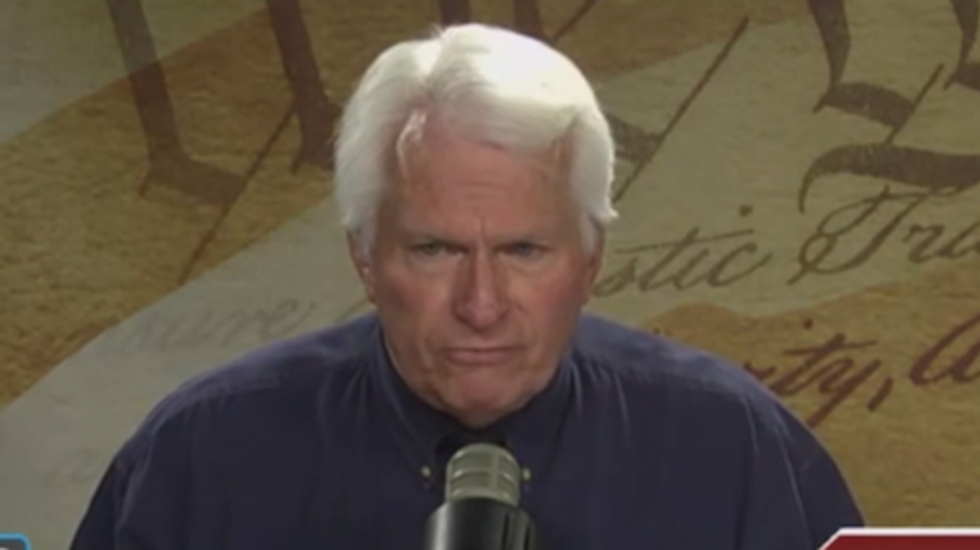 Bryan Fischer must be excited for his new job over at GOPUSA, where he's clearly going to be teaching a master class in concern trolling. Yes, Bryan Fischer is very very concerned -- no seriously you guys, shut up, he really is -- about Michael Sam's health, and he really feels that the NFL is letting Michael Sam down by glorifying him and drafting him instead of sitting him in a corner and just telling him over and over that he's going to die of AIDS, because that would be the really compassionate thing to do.

The NFL is celebrating the sexual equivalent of a brain concussion by going gaga over Michael Sam's sexual proclivities.

We're not really sure how the NFL has "gone gaga" over anything -- does anyone even still say that? -- except insofar as they let a team draft a gay guy and let another team tell one of their dudes he couldn't be a dick about that, which is actually a pretty measured, stately response. Going gaga, we think, would at least include mandatory gay marriage or twice-a-day circle jerks. But let's get to the brain concussion sex part, shall we? Kids, Bryan Fischer got himself ahold of some statistics, and he is PROUD.

While the CDC reports that 78 percent of all new HIV infections are among males, primarily those who have sex with other men, HIV/AIDS is taking a monstrous toll on young males in particular. According to the CDC, more than a quarter of all new HIV infections in the U.S. are found in young males between the ages of 13-24, particularly in young males between 20-24, the category into which Sam falls. In fact, young men are the only age group in which the rate of HIV/AIDS infections is showing a significant increase.

Despite the fact that blacks comprise just 12 percent of the population, blacks who are Sam's age represent an astonishing 57 percent of all new cases among young males. There are more new HIV infections among young black males (aged 13-24) than any other age or racial group, period. Alarmingly, the estimated rate of new HIV infection for black males is eight times as high as that of white men.

Kids, if you wrote that in your college statistics or health or epidemiology course, your professor might actually murder you. It starts with rates for men generally, throws in an aside -- with no rates to back it up -- that the bulk of those are gay men, goes back to talking about young men generally, and then slides on over to talking about black men specifically, and then winds it up by making it all about Michael Sam's gay gay gayness.

In other words, as a young, black, homosexual male, Michael Sam is in the single highest risk category for HIV/AIDS that exists on the planet. The NFL should be warning him, not glorifying him. [...]

If the NFL possessed one ounce of genuine compassion instead of the ersatz kind that exalts what should be condemned, they would be meeting privately with Michael Sam to urge him, in the strongest possible terms, to pursue reparative therapy in the hopes of saving his life.

Yes, because if there's one thing the NFL is concerned about, it is the long-term health of its players, as evidenced by their long-term refusal to address the problem of oft-concussed players fighting with mental illness, early onset dementia, and suicidal ideation. But fuck all that. There's one gay dude, so better get to yelling at him about how he's gonna die.

Let's also talk about how anyone can have the same fun with statistics that our Mr. Fischer did here. Just for funsies, we pulled the American Heart Association's 2013 report on cardiovascular disease in white men, and holy crap you guys! White men, as they age, have a greater risk for heart disease and high blood pressure than do white women. GOPUSA or whoever it is that pays Fischer to be such a hateful fuck is really obliged to sit Bryan Fischer down and cram leafy greens and Omega-3 supplements down his throat 24/7 in the hopes of staving off heart disease. Or they should just can him and hire a lady, as her life expectancy will be longer and she is far less likely to get angina when she turns 65, an age Bryan Fischer is rapidly approaching.

Hey, this is fun! Let's get a Wonket Actuary up in here to yell at conservative columnists everywhere about the disease they are most likely to get, because that is the best way we can show them that we care.