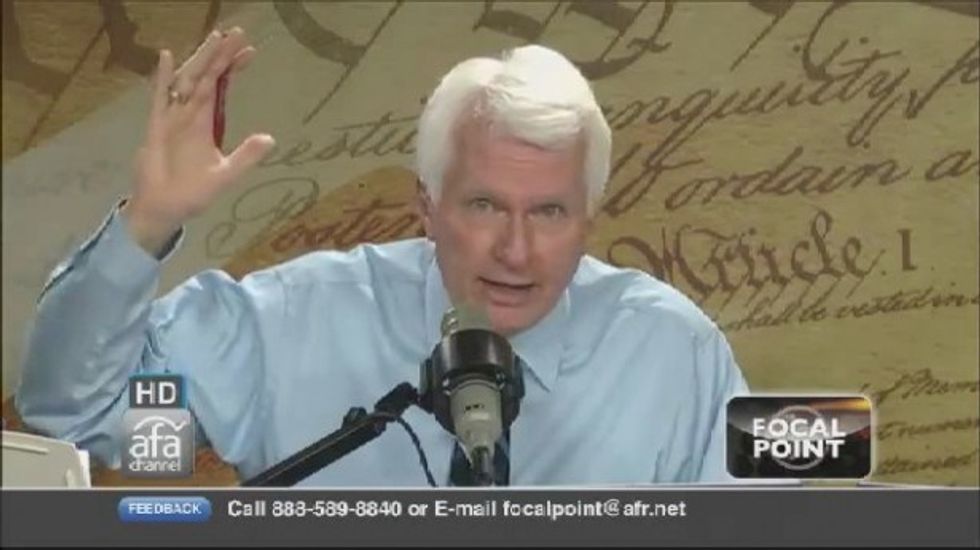 When we heard the news last night that Bryan Fischer was fired by the American Patriarchy Association, our first thought was that it couldn't have happened to a nicer wingnut. Our second thought was that this could be really bad for Yr. Wonkette, as a casual search through the archives shows that Mr. Fischer is a near-endless source of stupid hilarity. And our third thought had something to do with beer, as per usual.

Now, as it turns out, the American Family Association hasn't actually sent Fischer packing -- they've fired him from his most prominent official position with the organization, as “director of issues analysis,” so he's no longer going to be the public face of the group. AFA President Tim Wildmon told Rachel Maddow yesterday that “Bryan Fischer is just a talk show host,” so he'll still have the chance to say all the dumb shit he always has; it just won't be accurate to describe him as the AFA's "official spokesman" anymore.

Wildmon said Fischer had finally gone beyond the realm of acceptable discourse with his "soundbite quotes, you know, the Hitler and homosexuality one,” which would be the time in 2010 when Fischer explained that Hitler was gay and gays did the Holocaust:

So Hitler himself was an active homosexual. And some people wonder, didn't the Germans, didn't the Nazis, persecute homosexuals? And it is true they did; they persecuted effeminate homosexuals. But Hitler recruited around him homosexuals to make up his Stormtroopers, they were his enforcers, they were his thugs. And Hitler discovered that he could not get straight soldiers to be savage and brutal and vicious enough to carry out his orders, but that homosexual soldiers basically had no limits and the savagery and brutality they were willing to inflict on whomever Hitler sent them after. So he surrounded himself, virtually all of the Stormtroopers, the Browshirts, were male homosexuals.

So apparently this was a perfectly terrible thing to say, and the moment Wildmon found out that the quote from over four years ago was being included in reporting about the AFA's sponsorship of a Republican National Committee trip to Israel, he knew Fischer had to go, because such shocking, shocking comments are antithetical to the values of the American Family Association.

So let's all enjoy a few of Bryan Fischer's Greatest Hits, even though he is neither gone nor forgotten, damn him. We won't pretend to have a comprehensive collection of the dumb shit Fischer has said, because there was usually enough that we could have run one or even two Fischer stories a day. Nobody in their right minds would inflict that on themselves, which is why we hope the writers at RightWingWatch have an excellent medical plan (their archive of posts on Fischer runs to 157 pages -- and that's just the index).

Fun With The Constitution

Among our favorites are his thoughts on the Constitution, which of course was written by Christians, for Christians, and which actually only provides First Amendment protections for one religion. Can you guess which one?

In addition, he's pretty sure that the Constitution only allows Congress to pass laws that God would approve of, because of what the Bible has to say about kings and their authority, not to mention all the Bible's rules on how elections should work.

Also, too, the Founders explicitly included Christmas in the Constitution, since any fool can plainly see that it's dated "in the Year of our Lord one thousand seven hundred and Eighty seven," which means time began with Jebus's birthday, and that is THE LAW, duh.

And then there was the time he tried to wield sarcasm, accusing the Supreme Court of being homophobic because it only threw out DOMA but didn't mandate gay marriage for everybody. Funny, Antonin Scalia said almost the same thing, and it became the basis for courts to overturn bans on same-sex marriage all over the place. So maybe that's a near-win for Fischer, apart from his prediction that the homo-Nazis are going to take over and start shoving Christians into ovens.

On that score, Fischer has all sorts of interesting theories about how America is being overrun by the religion of secularism, which is a lot like the disease of having no symptoms. He commiserated with Rick Santorum about the need to bring true diversity back to schools by requiring Bible readings. And he helped the AFA explain that stores displaying "we don't discriminate" stickers in their windows were actually oppressing Christians by informing them that Christians weren't welcome there.

Fischer also didn't much care for the rampant paganism in America, explaining in 2011 that Native Americans deserved to have their land stoled because, after all, they were a bunch of Godless heathens and they still are today. That one actually went far enough over the line that the AFA pulled it from their website, although they were happy to keep Fischer on the payroll.

The Sodomites And Their Wily Ways

Fischer's main stock in trade, of course, will always be hatin' on gays, for Jesus, and he has had no end of creative thoughts on that topic. He never tired of thinking about hot gay sex and telling America just how very wrong it is, because if America only knew what those people get up to in bed, there'd be no more talk of "gay rights" ever.

He believed that gays were a threat to national security because Chelsea (nee Bradley) Manning was a homosexxican and did WikiLeaks.

He fretted that Barack Obama had "politicized" the downing of that Malaysian airliner over Ukraine by mourning the loss of several top AIDS researchers in the disaster -- after all, we already know how to stop AIDS, and that's to stop buttsexing.

He explained that the Boy Scout Oath automatically excludes gays from being scouts, since sodomites are by definition incapable of living a good clean life that God would approve of. Once the Scouts decided to admit gays, Fischer made a funny joke about renaming the organization “Boy Sodomizers of America,” ha-ha.

He wished that Michelle Obama would address the scourge of overweight lesbians by telling the husky dykes to just stop being all dykey, which would make them lose some weight.

And of course, he was very unhappy when the NFL allowed Michael Sam to play foot-the-ball, because if they really respected him as a person, they would warn him that he is going to die of AIDS from doing sex in the butt.

Who Would Jesus Smite?

Then there were Bryan Fischer's strange concepts of what Christianity is all about. Like letting people's houses burn down if they haven't paid their subscription fee to the local fire department. Jesus wants that, and Fischer was so sure of it that he said it twice.

He also was pretty sure that Jesus would have wanted hospitals to turn poor people away from emergency rooms, because why would Jesus want people to get services they can't pay for?

And of course, Fischer was outraged that the Congressional Medal of Honor had been wimpified by awarding it mostly to soldiers who risked or lost their lives to rescue other soldiers, instead of giving it to manly men who killed lots of enemies.

Last summer, Fischer explained that Jesus wanted us to throw out all the illegal immigrant children, because the Bible endorses the existence of national borders.

And most recently, he revealed that Jesus would completely be in favor of torture, as long as the torturers were Christians and had a really good reason.

BEARS! RUN FOR YOUR LIVES! BEARS!

And finally, our favorite thing about Bryan Fischer: his completely rational fear of bears. Writing about a grizzly bear attack in Yellowstone, Fischer explained:

God makes it clear in Scripture that deaths of people and livestock at the hands of savage beasts is a sign that the land is under a curse. The tragic thing here is that we are bringing this curse upon ourselves.

He also was terribly sad that anyone even bothered allowing grizzlies to live at all, let alone do science on them. "If it's a choice between grizzlies and humans, the grizzlies have to go. And it's time." The only proper thing to do with bears is to "shoot these man-eaters on sight," because the Bible tells us to.

Oh, how we wish we could say we'll miss Bryan Fischer. But there's no sign that he's actually going away.