Bryan Fischer Will Root All Queers Out Of Wingnut 'News' Websites 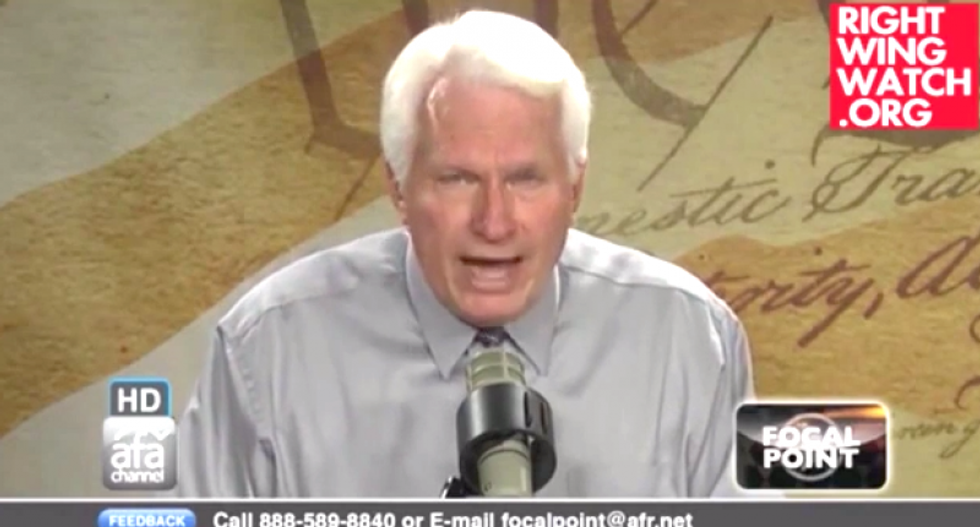 Bryan Fischer's butthole is in an extra-twitchy state (not the Michelle Malkin kind of twitchy; or wait, come to think of it, yes the Malkin kind), as he is feeling BETRAYED! You see, one of the wingnut websites he likes, Townhall.com, has a known homosexual in its midst, by the name of Guy Benson, political editor. And Benson is a dirty homo, as he reveals in a new book out this week. Let your freak flag fly, Fischer:

The political editor of a nominally conservative website, Townhall.com, revealed this week that he is a practicing homosexual.

We would not usually interrupt a juicy sexy blockquote so suddenly, but Townhall is "nominally" conservative??? Like, does he mean it doesn't feature stories written by people who have called for the death penalty for gays AS OFTEN as Matt Barber's home for brain lesions and dire warnings of the coming gay kristallnacht, Barbwire.com? All right, moving on.

In fact, [Benson] admits that “from time to time” he may well become an occasional activist on behalf of the homosexual agenda. He also believes that the Republican Party’s embrace of natural marriage, the institution God designed and defined at the dawn of time, is a “barrier to entry to the party,” a barrier which he believes must come down. He seems dedicated to do his part to demolish this barrier and turn the GOP into a sodomy-promoting political machine.

We could be wrong, but we are having a hard time envisioning the day when the GOP is known as the "Sodomy-Promoting Political Machine." That is a good name for a band though! Maybe Mike Huckabee could play the gee-tar.

So anyway, Fischer clearly wants Benson fired. He points out that the owner of Clownhall is "Salem Media Group, which describes its mission as 'targeting audiences interested in Christian and family-themed content and conservative values.'" And how could a man who is known to Sucka-the-D possibly be a Christian or a conservative?! JoeMyGod points out that Salem ALSO owns Hot Air,RedState, and Human Events -- pretty much all the places you go when you want to find wingnuts bitching and moaning about how frosting a gay cake probably feels just like the nails that pierced Jesus Christ's wrists at Golgotha. OHHH, and it owns Twitchy, so we're back to Michelle Malkin and the way we wrote her name in the same sentence with Bryan Fischer's twitching B-hole, above.

Benson seems decent enough, for a gay conservative -- they're always kinda weird, really. As far as what he actually believes about the Big Gay Homosexual Agenda, it is this:

“I’m for civil marriage, I’m for nondiscrimination laws — but I think there should be broad carve-outs for religious organizations, in particular, and narrow carve-outs for closely held businesses that serve the wedding industry,” he said. [...]

“I think a lot of gay people have felt for generations, obviously, that they have not been treated fairly, and I don’t think that coming to a point of social harmony and then pushing further in this almost vengeful, ‘Let’s get ‘em,’ hounding people out of jobs … [I]t’s not productive, it’s not good for the country,” he said.

We obviously disagree to a point about "closely held businesses," because a business is a business. Oh, and also, everybody believes in the "broad carve-outs" for religious organizations, pretty much. And Benson DOES acknowledge that he wouldn't be where he is today -- able to come out of the closet into a party that cares less and less every day about the whole "gay" thing, regardless of what Bryan Fischer thinks -- if it hadn't been for those libtard gay lefty activists who did all the hard work for him. So maybe he's not ALL bad, except for the part about how Townhall is not in any way "nominally conservative," but is rather, as JMG states, "one of the most viciously anti-gay sites in all of Teabagistan and regularly publishes columns from the likes of Matt Barber and other anti-gay hate group leaders." So, uh, maybe Guy Benson should try to do something about that, if he doesn't want people to call him just another self-loathing gay conservative twat.

To his credit, Benson obviously thinks Fischer is a big dumb stupid, an object to be laughed at:

So that's that. The conservative movement loves homosexuals like Guy Benson, who is a minion of the traditional-marriage destroying Gaystapo, and Bryan Fischer wants him fired from the Townhall website. We would say another thing about Michelle Malkin and twitching B-holes, but it's lunchtime and that's GROSS.