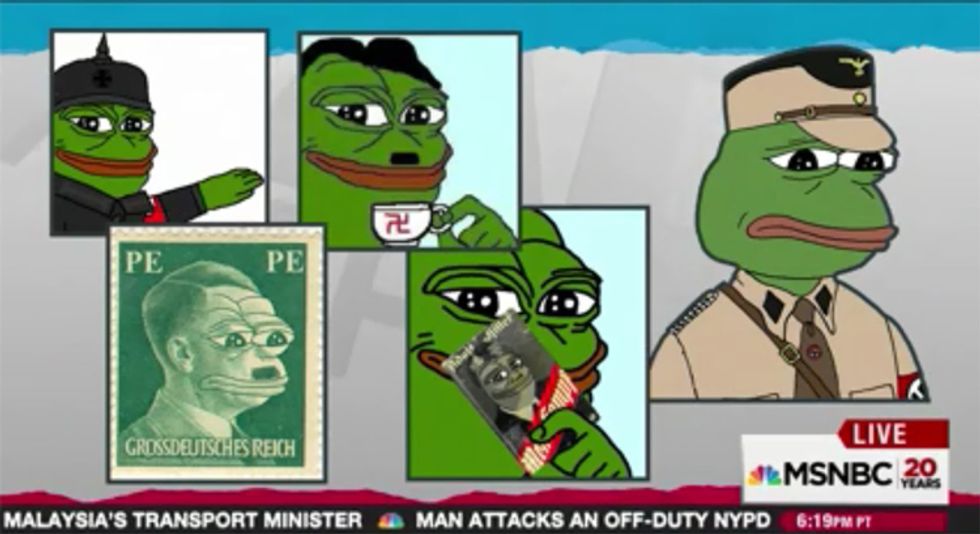 The business model for Dead Breitbart's House Of Anxious White People involves a really tricky balancing act: It's hard being a rightwing media giant -- or at least the biggest troll in the Wingnuttosphere -- because they really want to attract as many far-right looneybirds as possible while maintaining at least a plausible claim that the site itself eschews overt racism, which is still bad for business out in normie-land. Tiptoeing right up to that line brings in the yahoos and their eyeballs see the ads; stepping over it wins you an advertiser boycott. So the trick is to blow those dog whistles as often as possible while looking up innocently and insisting you can't help it if a few of the mutts you throw red meat to might like barking out the Horst Wessel Lied now and then. For Breitbart, that strategy has largely been a matter of running lots of articles about scary Muslims, black crime, rapist illegal aliens, and other threats to "Western culture," while avoiding the term "white genocide."

As a nifty new piece in Buzzfeed illustrates, that strategy was key to the growth of Breitbart.com during the run-up to last year's election. Thanks to a trove of documents (mostly emails) "obtained" by Buzzfeed, we learn how Breitbart "alt-right" apologist Milo Yiannopoulos, under Steve Bannon's editorship, helped channel a whole load of ideas from various shades of white supremacists (from #FFFFFF to eggshell) into the Breitbart weirdstream while the editors pruned out the actual Nazi salutes and Holocaust "jokes." It's not just an exposé of emails showing Milo's links to some very sketchy people, it's also a terrific analysis of how Bannon shaped and nurtured Milo from his start as a minor anti-feminist idiot in Breitbart's London bureau into a Big Rightwing Deal, along the way piping all sorts of neo-Nazi filth, slightly filtered and decontaminated, into mainstream politics.

One of the article's best segments is a reconstruction of how Milo and Breitbart colleague Allum Bokhari -- Yiannopoulos's ghostwriter for many Breitbart pieces published under Milo's byline only, as you'd expect at a reputable journalism site like Breitbart -- constructed their magnum opus, the massive "Establishment Conservative's Guide to the Alt-Right," a 3,000-word monster of definitions and apologetics claiming that actual Nazis were just a teensy little part of the movement, published in March 2016. Among the very fine people Milo contacted while researching the piece were Andrew “Weev” Auernheimer, the sysadmin for the openly Nazi Daily Stormer; Curtis Yarvin, a blogger who writes as "Mencius Moldbug" and advocates abandoning Enlightenment democracy for a return to feudalism, because people are too weak to govern themselves; and Devin Saucier, a writer and editor who goes by "Henry Wolff" at the white nationalist blog American Renaissance. And what a fine soup of pure Fever Swampwater they served up:

The three responded at length: Weev about the Daily Stormer and a podcast called The Daily Shoah, Yarvin in characteristically sweeping world-historical assertions (“It’s no secret that North America contains many distinct cultural/ethnic communities. This is not optimal, but with a competent king it’s not a huge problem either”), and Saucier with a list of thinkers, politicians, journalists, films (Dune, Mad Max, The Dark Knight), and musical genres (folk metal, martial industrial, ’80s synthpop) important to the movement.

Yiannopoulos sent all their suggestions to Bokhari, plus some careful research he'd done on Wikipedia about the "alt-right" and on "the esoteric far-right Italian philosopher Julius Evola," who inspired not only Mussolini's fascist movement but also American Nazi Richard Spencer. Milo apparently didn't do much of the heavy lifting in writing the article; instead, he simply instructed Bohkari, "Include a bit of everything." Once Bokhari had a draft, Milo sent it back to his team of the Best and Rightest so they could line-edit it, and sought additional input from Manosphere basement-dweller Vox Day. They really had all the big thinkers working on that thing.

Big surprise: After Bokhari did most of the actual writing, Milo wanted it published under his name only, and emailed Breitbart editor Alex Marlow, admitting "Allum did most of the work on this and wants joint [byline] but I want the glory here[.]” But Milo knew how to handle the pesky ghostwriter who might steal part of Milo's achievement just by having done all the work: "I am telling him you said it’s sensitive and want my byline alone on it."

Milo immediately emailed Bokhari to insist the editors wanted Milo to have the solo byline, so he'd be solely responsible for any blowback: "Truthfully management is very edgy on this one (They love it but it’s racially charged) and they would prefer it." Bokhari suggested instead that his name be included for that very reason: "I think it actually lowers the risk if someone with a brown-sounding name shares the BL.”

Yes, Milo is a stinky selfish weasel. Marlow insisted on further edits to make it clear that Breitbart certainly isn't in favor of all these Nazis, no, heavens, and that Yiannopoulos explicitly say he and most alt-righters have nothing to do with the Nazis who helped Milo put the piece together.

There's much, much more, including a fun video of Milo belting out "America the Beautiful" at a karaoke night while Richard Spencer and some white nationalist pals raise their arms in Nazi salutes -- it's just one of those things they do.

Milo said in a statement to Buzzfeed that his "severe myopia" kept him from seeing the sieg-heiling just a few feet away from him. You know, those stage lights are so very bright.

Another fun detail: After one of Milo's more notorious pieces, headlined "Birth Control Makes Women Unattractive and Crazy," Bannon sent him an angry email telling him to stop farting around with dumb stuff and concentrate on the real target: Scary Muslims on Facebook, which the New York Times had written about that very day:

Dude---we r in a global existentialist war where our enemy EXISTS in social media and u r jerking yourself off w/ marginalia!!!! U should be OWNING this conversation because u r everything they hate!!! Drop your toys, pick up your tools and go help save western civilization.

“Message received,” Yiannopoulos wrote back. “I will do a Week of Islam next week.”

“U don’t need that,” Bannon responded. “Just get in the fight---ur Social Media and they have made it a powerful weapon of war. … There is no war correspondent in the west yet dude and u can own it and be remember for 3 generations--or sit around wasting your God-given talents jerking off to your fan base.”

That fan base -- and fans for exactly the reason of "jerking off on feminists" -- turned out to include writers for both mainstream and purportedly feminist outlets, who kept up correspondence in which they asked Milo to slag certain "fat feminists" and made fun of women they thought might be trans. So that is fun to learn!

So that's a bit of insight into the Mentoring of Milo. Bernstein also learned from the emails that Yiannopoulos was fond of witty passwords for his computer accounts, like one starting "KRISTALL--" and another that included "LongKnives1290," combining the Nazi purge of the SA and the year Edward I expelled Jews from England.

What modern aristocracy would be complete without its own palace geek show?

Go read the whole long, well-researched piece. It's an excellent profile of the culture of authoritarianism and sycophancy in far-right media, with cameo appearances by the Mercer family, the Trump-enamored billionaires who fund Breitbart and now Milo's solo enterprise, and of the careful steps Breitbart editors took to bring in noxious ideas from the slimiest corners of the internet, wipe off the swastikas, and repackage them for mass consumption. Breitbart has threatened to sue media organizations that call it "white nationalist," but Bernstein makes it clear that's mostly a matter of careful editorial work -- they're just white nationalist-adjacent.

Yr Wonkette is supported by reader donations. CLICK HERE to help us keep the servers running and the writers paid, since we don't yet have our own billionaire patrons. OVER HERE, MR. SOROS! OVER HERE!