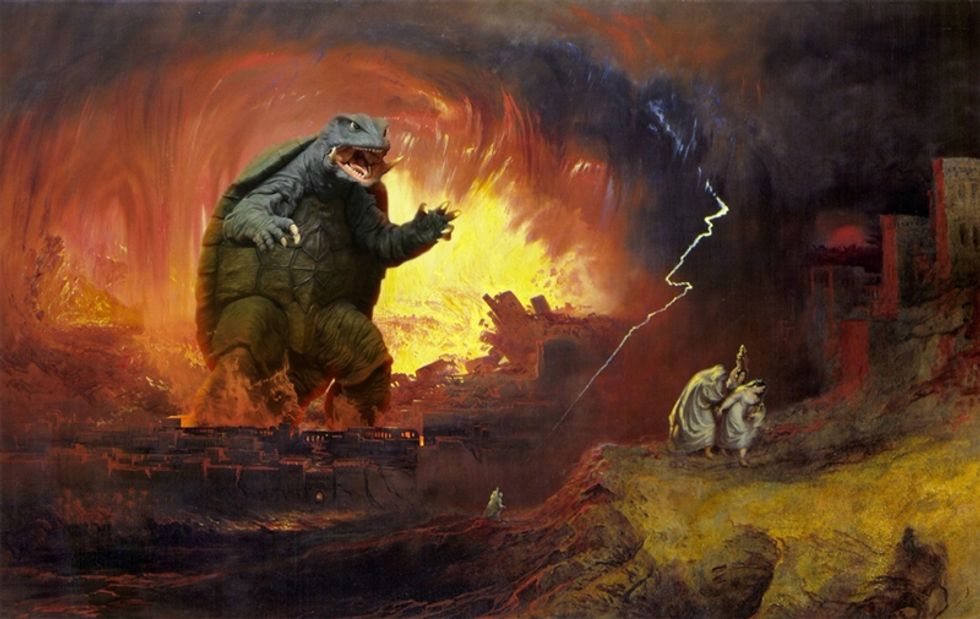 You might remember the sexciting story (which Wonkette broke, MUST CREDIT WONKET!) of weird incognito lawyer Matt McLaughlin and his quest to get an initiative called the "Sodomite Suppression Act" on the California ballot. The initiative had the serious mission of ridding California of its troublesome sodomites, because Bible says so, and called for all homosexxicans to be "put to death by bullets to the head or by any other convenient method." Unfortunately for McLaughlin, California Attorney General Kamala Harris is not A Idiot, so she filed an action to have the initiative tossed seeing as how it was “patently unconstitutional, utterly reprehensible, and has no place in a civil society.” McLaughlin, undaunted, figured that's just, like, your opinion, man, so he came back for another try, this time framing the initiative as an amendment to the California Constitution with the catchy and totally different title, "The Sodomite Suppression Mandate.” And wouldn't you know it, Harris's office summarily dismissed that one too.

Matt McLaughlin, who is definitely a real Christian lawyer with his own website and everything, is not going to just sit back and let this tyranny stand, because he has rights as a citizen. In a phone interview with the Sacramento Bee, he explained that while he hadn't defended his first initiative when Harris deep-sixed it, he was pretty sure she would have to allow the second version to go forward to the signature-gathering phase, since it was a constitutional amendment. He also explained that there's nothing unconstitutional about his proposal, not at all:

“What I’m proposing is not murder,” McLaughlin said in a telephone interview with The Sacramento Bee. “I’m proposing the laws as they’ve ever been. The Bible doesn’t change.”

We'll just assume that the Bee reporter just smiled and made sure he was taking careful notes.

McLaughlin said that for centuries, homosexuality was a crime, often punishable by death, but as gays and lesbians won legal and political battles for their rights, “I feel mine were attacked. I’m a Bible believer.” Christian supporters of gay rights have noted that Jesus never spoke about homosexuality.

Wednesday, Harris's office sent McLaughlin a letter explaining that, no, dear, you can't propose a state constitutional amendment to murder people either, no matter what the Bible says, and also generously refunded his $200 filing fee. The proposed amendment was apparently pretty much the same as the earlier initiative, including the bit about executing gays & lesbians via "bullets to the head or by any other convenient method." Matt, maybe you should have given inconvenient methods a try, seeing as how that's how the death penalty really works anyway.

McLaughlin told the Bee that he was being backed into a corner, which is where no one puts Baby:

“I don’t know what I should do at this point,” he said. “It’s wrong what’s she’s doing. She’s putting the onus on me to file a lawsuit.”

That ought to be worth keeping an eye out for. And who knows, maybe he'll be able to get Harris removed from the decision-making process on his grand idea, seeing as how at a Pride event last week, Harris held up his proposal as proof that even after the Supreme Court legalized sodomite marriage, there are still people who Don't Get It:

Speaking off the cuff, she dismissed McLaughlin as an “idiot.”

Harris later clarified that it was “just the feeling I had at that moment that I obviously could not suppress.”

She added: “Anyone who will take up their own time, or anyone else’s time, advocating for murder of innocent people in a way that is so fueled by bigotry and hate is someone whose intelligence we should question.”

Now, if that clear prejudice against a smart Christian lawyer with his own website and everything doesn't prove that Harris is too biased to do her job and approve McLaughlin's clearly legal ballot initiatives, we don't know what is. And on that website, McLaughlin explains just how completely illegal Harris's actions are, complaining that Harris "wants to pretend that she doesn’t even have to consider the brand new initiative I filed" and that she is utterly wrong to apply the previous ruling against the "Sodomite Suppression Act" to the completely different (except for the parts that are identical) “Sodomite Suppression Mandate”:

Of course, that is blatantly dishonest. The first initiative only sought to change the Penal Code, but the second one seeks to amend the state’s constitution – that makes them radically different proposals.

McLaughlin has sent a fax to Harris warning her that she has until July 7 to accept it, or... something.

Come see the violence inherent in the system!