California Lady Lawmaker Knows What Causes Droughts, And It Is Abortion 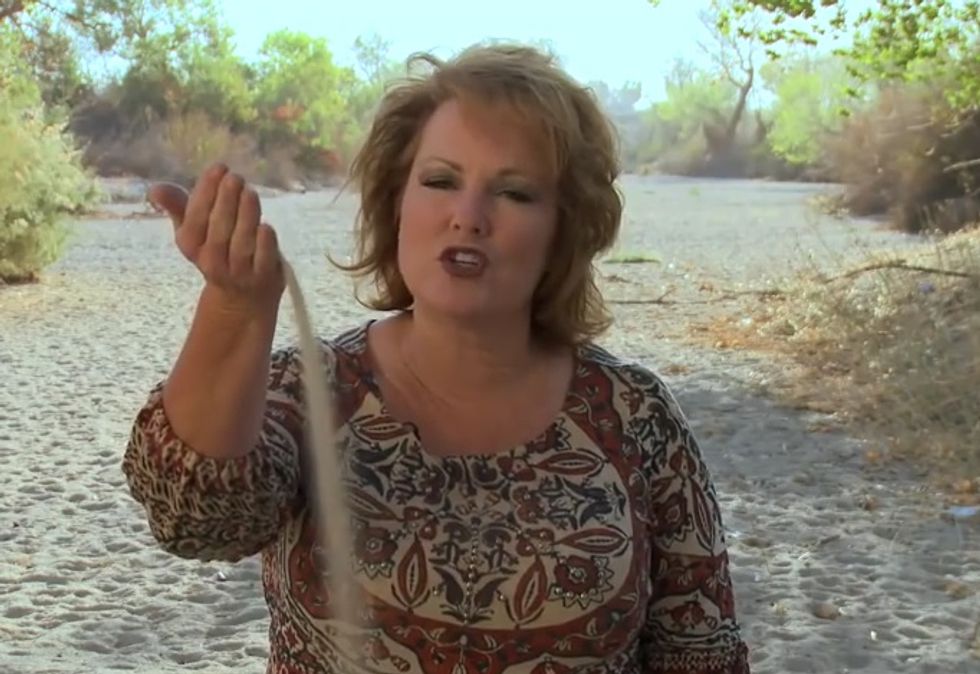 Though they may never accept evolution, let it never be said that rightwingers never let their thinking on critical issues evolve. Take, for instance (please!) California Assemblywoman Shannon Grove, who used to believe California's drought was caused by environmentalists giving all the state's water to fish, but who now has come up with a far more plausible explanation for why it hasn't rained: God is angry with California because of legal abortion. How she knows that it's abortion and not The Gays we don't know, but she's got her ways of knowing things.

At the annual California ProLife Legislative Banquet in Sacramento last Monday, Grove approached the podium and held a Bible over her head, proclaiming to applause, "This is the infallible word of God...I fear Him more than I fear anyone.” And then she explained why the Golden State is in the fourth year of a record-setting drought: It's all the baby-killing.

“Texas was in a long period of drought until Governor Perry signed the fetal pain bill,” she told the audience, presumably referring to HB 2, the omnibus Texas abortion bill that included a 20-week ban based on junk science. “It rained that night. Now God has His hold on California.”

Grove didn't explain why God sent one night of rain after Perry signed HB2 in 2013, and then allowed the drought to continue until 2015 -- when God sent some killer floods, drowning two dozen Texans, presumably as part of God's continued reward for Perry's restrictions on abortion. Look, don't demand mere human logic on this, because Mysterious Ways and all that.

Now, you might think that since Grove serves on the Agriculture Committee, which helps set water use policy, she would know a thing or two about the actual causes of the drought -- like nature-worshipping pagans. Or maybe, if she were one of those kooks who's into the "science," she'd know that NOAA says it's primarily the result of a "prolonged, enhanced high-pressure ridge off the West Coast [that] prevailed during the last three winters," and that the extreme temperatures have been exacerbated by global warming, which she is pretty sure is a hoax anyway.

Sadly, on this one, Grove seems to be a prophet without many disciples. In a phone interview with RH Reality Check, California ProLife Council chairman Brian Johnston was very, very careful to neither embrace Grove's analysis of the drought, nor to call such a valuable member of his alliance a complete looney bird: "That was never said by me or the California ProLife Council,” he said, likely after a long, pained pause.

Other California wingnuts have no problem with Grove's hypothesis, and in fact may be fighting with her over who thought of it first. Bill Koenig, publisher of Loonosphere prophecy and End Times website World Watch Daily, explained in May that the drought was caused by gay marriage and abortion and a lot of general sinnin':

We’ve got a state that over and over again will go against the word of God, that will continually take positions on marriage and abortion and on a lot of things that are just completely opposed to the scriptures and unfortunately a lot of times when it starts in California it spreads to the rest of the country and even spreads to the rest of the world. So there very likely could be a drought component to this judgment.

So there you go: It is perfectly reasonable to believe that abortion and buttsex cause droughts, while the demonstrated science that greenhouse gases are causing the Earth's atmosphere to warm is a completely crazy plot by scientists to separate taxpayers from their money and impose socialism.