California Wildfire Victim Pretty Sure He Was 'Targeted,' By Wildfire. THANKS OBAMA. 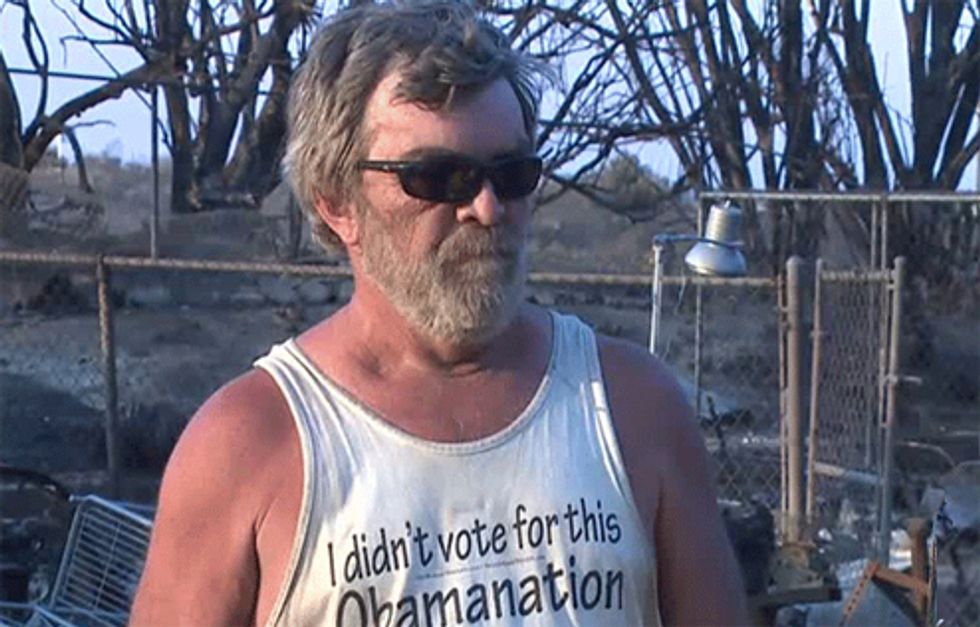 It's pretty nice to know that in the midst of tragedy, some people cling to what's really important, like ranting about how Barack Obama has ruined America. Meet an unidentified media hero in Carlsbad, California, whotook the opportunity to tell a local reporter what gives him the strength to go on after his house was destroyed by a wildfire: the knowledge that, bad as it is, "the last five years under Obama has been worse than this." Dude waited ALL DAY to get in front of a camera to say that.

This firebagger gentleman clearly hopes to be the next Cliven Bundy, with his tale of how he saved his garage with a free market garden hose, while the government firefighters didn't adequately protect his house, and only started a firebreak a little ways after his residence. "Actually, I believe I was targeted," he adds, and the poor reporter has no freaking idea what to do with him. "You think it was arson?" "Yes." And also, we're pretty sure he thinks the fire department deliberately let his house burn, possibly because he is a free patriot who opposes the Kenyan Usurper.

Yes, we know some of you don't do video, but you need to see this genius:

We especially love the befuddled reporter's attempt to shift back to a more familiar news script as he tosses back to the newsroom. That boilerplate line "These kinds of situations seem to bring out the best in people" is just a thing of unintentional beauty.