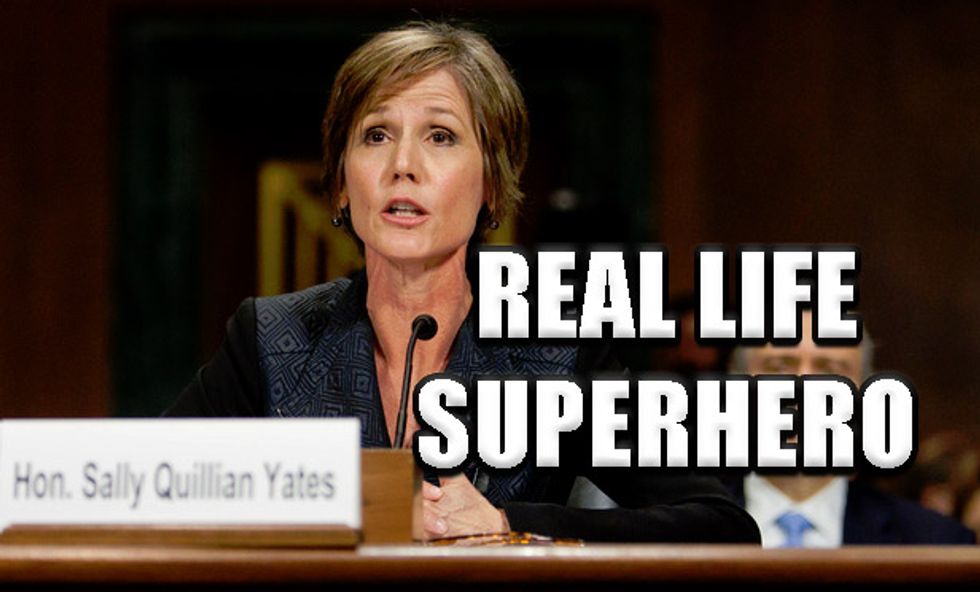 Remember awesome Ladylawyer Sally Yates? She got fired by Donald Trump for saying his first Muslim Ban Order was hella illegal. He said she "betrayed the Department of Justice by refusing to enforce a legal order." And then all the courts ruled against the ban. Sad! It appears Sally Yates knows a thing or two about lawyering, actually. And still, the Justice Department which she used to run sent her a letter this week mansplaining how she should Sit Down Little Lady because LAWS. More specifically, she must nevernotever testify before the House Intel Committee (AKA the Nunes Clown Car Committee) because "presidential communications privilege." Also, too because "deliberative process privilege." Is this privilege stuff a real thing, or is it just Trumpland talking smack like always?

Spoiler Alert: IT IS BOTH!!!

Remember how Lt. Gen. Michael Flynn was naughty-talking about sanctions with the Russians, and then had to resign because he lied about it to poor Mike Pence? Or maybe he was hounded out of office by a vicious smear campaign.

The real scandal here is that classified information is illegally given out by "intelligence" like candy. Very un-American!

Well! Sally Yates was the one what got the fun job of mentioning to Team Trump that the FBI might have their National Security Advisor on tape whispering sweet nothings in Cyrillic. Lucky girl! But despite Yates's heads up on January 26 that Flynn was vulnerable to blackmail for lying to the Feds, he continued to receive classified briefings. Yates herself was fired four days later for having taken a first year ConLaw class.

Keep on remembering those first two weeks of February when stories were breakingleft and right about Flynn and other Trumpies playing spin the bottle with Russians. The whole time President Winning and his spokesman Sean Spicer insisted that no person in the White House had ever touched Russian dressing, much less hung out with this guy. Perish the thought!

Okay, but no pee stuff this time!

And they would have gotten away with it, too, if it weren't for that meddlesome lady lawyer! And all the journalists. And the FBI. And the CIA.

Let's not get distracted here! The point is, if Sally Yates testifies, she's going to say that she warned the White House way back on January 26 that Flynn was in deep shit. And then the question will be WHY DIDN'T THE WHITE HOUSE DO ANYTHING ABOUT IT? And was it because they were all rolling around in the doodoo with him? And then you have A PROBLEM. Two problems, to be exact, since last week Yates and former CIA Director John Brennan informed the White House that their testimony was likely to contradict statements by members of the Trump Administration.

So, can the White House stop Sally Yates from testifying? Well, they do aim to try. On March 24, Yates's lawyer received a letter from a Scott Schools, Deputy Attorney General at the Justice Department, directing her to seek permission from the White House to testify before the Intel Committee. Essentially, Schools is passing her off to White House Counsel Don McGahn.

Ms. Yates seeks authorization to testify about communications she and a senior Department official had with the Office of the Counsel to the President. Such communications are likely covered by the presidential communications privilege and possibly the deliberative process privilege. The President owns these privileges. Therefore, to the extent Ms. Yates needs consent to disclose the details of those communications to the HPSCI, she needs to consult with the White House. She need not obtain separate consent from the Department.

Schools characterizes Yates's potential testimony as "likely covered by the presidential communications privilege," which protects executive branch communications, including documents prepared by or for the president's staff. Schools is suggesting that, because Yates handed the info to McGahn, privilege attaches. Here again, Yates shared results of an ongoing FBI investigation with Trump's lawyer, but the information was certainly not generated at the White House's request.

As a matter of law, the presidential communications privilege does not extend past the White House into the executive agencies. Schools does give it the old college try, though. He insists that "the president owns these privileges," and tells her she doesn't need to worry her pretty little head about getting permission to testify from the Department of Justice.

Sally Yates sees you coming, Scotty. She saw you a mile off.

This is from Yates's lawyer's response to the Justice Department. She sent a similar letter to White House Counsel McGahn.

We believe that the Department's position in this regard is overbroad, incorrect, and inconsistent with the Department's historical approach to the congressional testimony of current and former senior officials. In particular, we believe that Ms. Yates should not be obligated to refuse to provide non-classified facts about the Department's notification to the White House of concerns about the conduct of a senior official. Requiring Ms. Yates to refuse to provide such information is particularly untenable given that multiple senior administration officials have publicly described the same events.

In light of those public statements, it is unclear what confidentiality interests may still exist concerning these events.

In plain English, Yates is telling them that they are full of shit. Even if their interpretation of the law were correct, AND IT'S NOT, they would still have waived the privilege by running their damn mouths about it for six weeks now! Spicer alone had five different versions of when Pence found out Flynn was hot and heavy with the Russians. They can hardly pretend it's a secret now!

Yates's letter to McGahn ends by requesting permission to testify, kind of.

If I do not receive a response by Monday, March 27, at 10AM EDT, I will conclude that the White House does not assert executive privilege over these matters with respect to the hearing or other settings.

And then, as if by divine providence, THE HEARING WAS CANCELED. Chairman Devin Nunes, who has super secret sources that he can't share with the rest of the committee, has postponed Yates's testimony indefinitely. He doesn't want to hear from Yates, or Clapper or Brennan. And he's sure Comey and Rogers have nothing to add, so we should all move along here.

Meanwhile, back in the the White House Press briefing room, Sean Spicer can cross his fingers and say that no one in the White House ever tried to kill Yates's testimony. Because they never answered her letter!

“I hope she testifies. I look forward to it."

At which point, we've crossed so far over into the ridiculous, there is nothing left to satirize.

Are you getting the feeling that shit is about to get really crazy? Us, too! Throw us a couple of bucks so we can keep you updated on all the craycray.