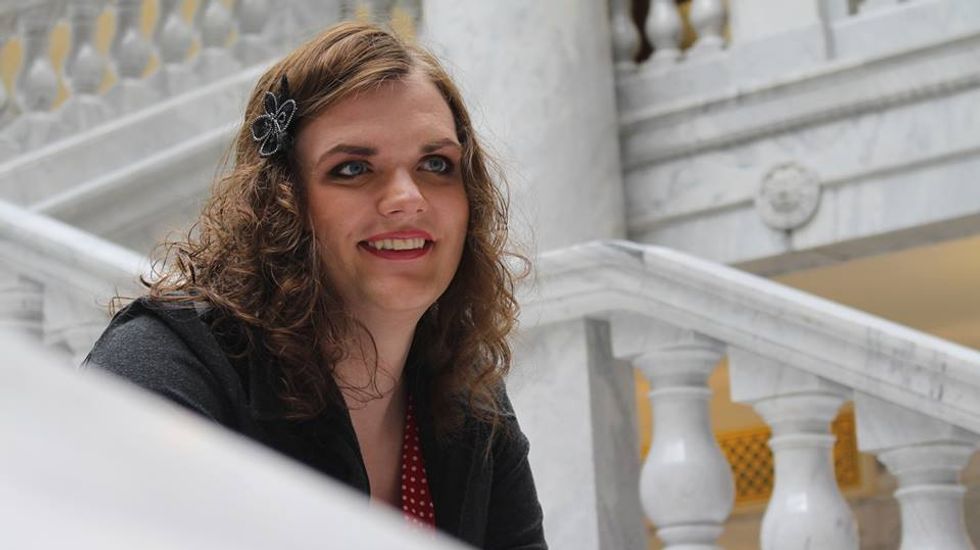 If you have been following Dok's lovely, Pulitzer Prize-winning (in our hearts!) series on all the Senate races of US America, you already know there was a Democratic primary race in Utah to choose a worthy opponent for Republican Gross Motherfucker Senator Mike Lee, whom a 2015 study called the Senate's most ideologically extreme member. Lee is the Terrible Teabagger who got elected in 2010 because longtime Utah GOP Sen. Bob Bennett was just too big a fuckin' liberal for the Tea Party.

[wonkbar]<a href="http://wonkette.com/603156/can-either-of-these-total-newbies-beat-loathsome-utah-teabagger-mike-lee-your-senate-sunday"></a>[/wonkbar]WELL! The primary results are in, and the winner is a lady named Misty K. Snow. And you know what's special about Misty K. Snow? She is the FIRST openly transgender major party candidate for the United States Senate! She's super-liberal, and one time she said this about the man who is now her official opponent:

“He is probably the second most loathsome guy in the United States Senate behind Ted Cruz,” said Snow, citing the 2013 partial government shutdown stemming from a strategy to kill the Affordable Care Act pushed by Cruz and Lee. “He is wrong on every issue I care about. He is a horrible guy.”

See? She's already good enough at Senate that she knows that even if Mike Lee is literally Hitler, people will still hate Ted Cruz more. It's the American way! Let's have the Salt Lake Tribune tell us a little bit more about ol' Misty:

Throughout the primary, the 30-year-old [MILLENNIAL! - ed.] Salt Lake City resident has given scant attention to her potentially historic status. She instead has campaigned on a progressive platform and promised to aggressively challenge Lee, whom she has repeatedly called "loathsome." [...]

She has called for a $15 per hour minimum wage, paid family leave, legalized marijuana, criminal-justice reform and free or reduced tuition for higher education, a platform inspired by presidential candidate Sen. Bernie Sanders, I-Vt. She said her goal is to boost working-class people such as herself. She's employed as a cashier at a Harmons grocery and hasn't gone to college, partly due to the cost and partly because she wasn't sure what career path she would like to take.

She seems nice! She will ring up your Velveeta and your meat chunks, and she will tell you what gargoyle dicks Mike Lee and Ted Cruz are at the same time! In fact, she seems way nicer than the dude she beat, 35-year-old Jonathan Swinton, a marriage therapist who doesn't support a woman's right to choose, and has even supported investigating Planned Parenthood for selling baby parts out of the back of a van down by the river.

[wonkbar]<a href="http://wonkette.com/602913/lol-hillary-clinton-might-beat-donald-trump-in-utah"></a>[/wonkbar]Now, does Misty K. Snow have a chance of winning? Meh probably not, because Utah is sooooo Republican. But maybe! It's a longshot, but considering how Utah Mormons hate Donald Trump so much that Hillary Emails Benghazi Gay-bortion Rodham Clinton has a shot at winning the state in November, maybe the conserva-Mormons will forget to vote altogether? MAYBE those wingnuts will have a hard time getting their magic underpants onto their supple Mormon bodies on voting day, trip over their feet in the foyer a few times, and then decide to stay home and binge-watch "Big Love" instead?

YOU DON'T KNOW, COULD HAPPEN.

Regardless, Misty says she's heard from people that she's "already making a difference just by running," and Wonkette is inclined to agree with that. If you would like to give her ALL THE DOLLARS to support her historic run, win-or-lose, you click this link RIGHT NOW.

[wonkbar]<a href="http://wonkette.com/600470/gov-nikki-haley-not-entirely-sure-why-yall-gotta-be-such-bigots"></a>[/wonkbar]In other transgender election news, a trans lady named Misty Plowright (all the trans ladies called "Misty"!) won the Democratic congressional primary for Colorado's 5th District, YAY FOR HER! Also too, South Carolina state Sen. Lee Bright, who sponsored a bill to protect OUR WIVES AND DAUGHTERS from folks like The Misties when they need to go to the bathroom, and who also cries a lot, lost his re-election bid in a runoff, AWWWWWWW.