Can We All Stop Making Up Fake Cake Fag Stories? That'd Be Great 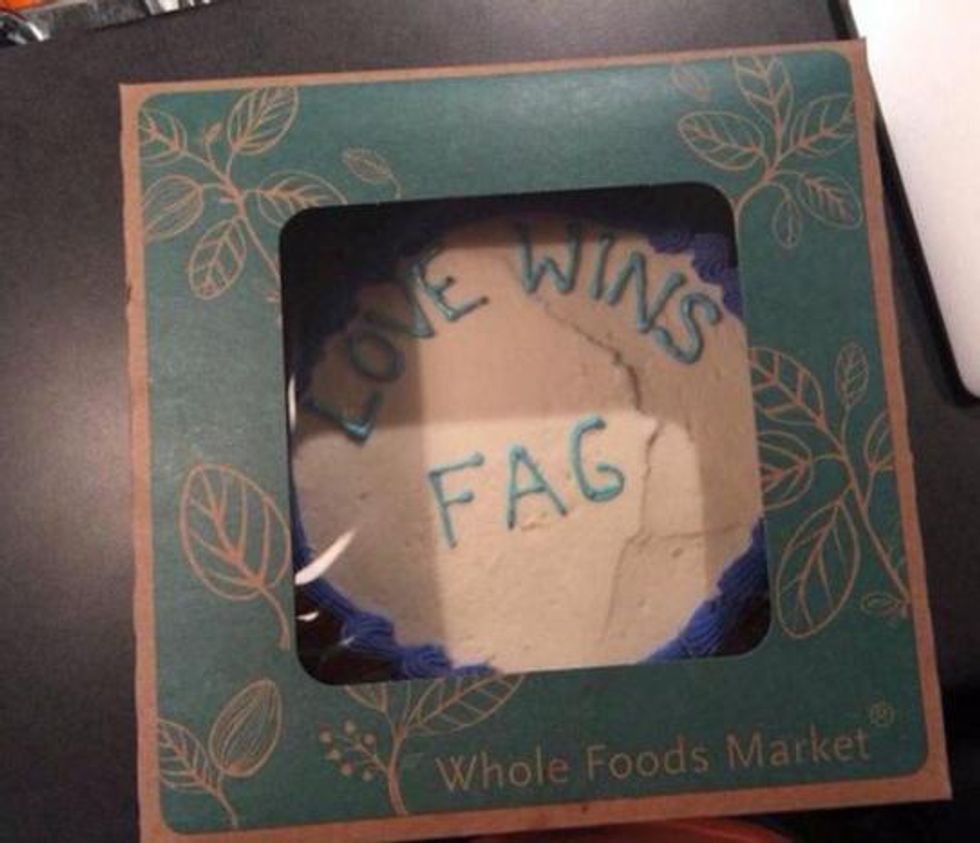 Yesterday morning, in the chatcave, we looked at a post from RawStory. A pastor had bought a cake from Whole Foods, which he'd had inscribed with the words "Love Wins," and then YouTubed himself looking through the cellophane window at the (still sealed!) cake. It said "FAG." That is not a nice thing to add to your cake, and the pastor was PISSED Y'ALL!

What did we think? Well, the cake was still sealed! But there was just something off -- who doesn't look at his cake? and there's a cellophane window right there -- and it wasn't long before we decided to shitcan the story. It's not like another gay slur outrage wouldn't happen again in five minutes.

That decision seemed well-justified just a few hours later, when Whole Foods decided to countersue the fuck out of that poor pastor for making the whole thing up. Exhibit A? Video showing that when the pastor bought the cake, the label was on the top of the box, not the side where he claimed it was sealing the cake so he couldn't possibly have carved into it that backwards B.

Ohio bus driver, a black kid didn't shoot you for the knockout game.

Trans Vassar student, nobody wrote filthy things about trans and black people on Vassar's walls but you. (And fuck you for making us link to Daily Caller.)

And Ashley Todd, thugs didn't hold you down and carve a B for Barack into your face. Girl, that was you. Alllll you.

Hate crime hoaxes seem pretty well distributed across the culture and partisan divides. There's a lot of them in colleges -- with students and even professors stringing up their own nooses and then screaming for justice. There's an awful lot of white people claiming they've been knockout-gamed by black thugs who murdered their wives, or their children, that they in fact murdered all by themselves! There are women who say they have been raped when they have not been raped. Ben Carson even hoaxed himself, claiming he just can't stop stabbing folks. You guys, Ben Carson is weird.

Then there was this chick.

Listen, I get that some of us are fragile, and the outpouring of love you get from good, nice people when you have been the victim of an attack feels good. You are slathered in comfort; you are enfolded in loving arms and embraced. But what happens when you make shit up, and people find about it (and they will find out), is people start believing that every accusation of rape is hysterical or even malicious, and every poop swastika was put there by the person who found it, and every time someone spits on John Lewis, he must be faking it. (For the record, he is not!)

So, in the words of Jon Stewart, you are hurting America, and please cut the shit. Today, pastor Jordan Brown of Austin, Texas, we are talking to you. Tomorrow we will be talking to someone else. My money's on Carson. He makes up crazy shit just constantly.