Can You Handle More BOAT HEROES? You Probably Can! 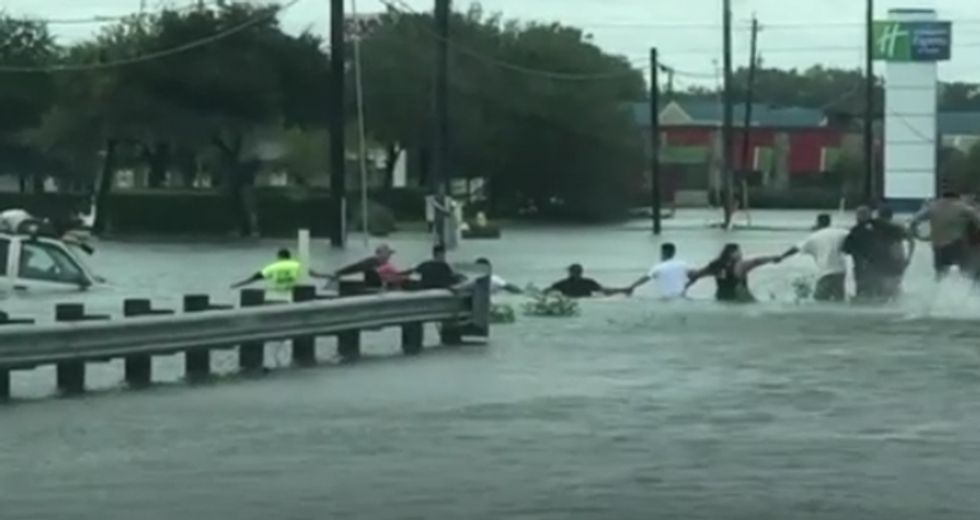 People are really good at heart

So Donald Trump finally read some words that were written for him about the people who've lost everything in Houston, and now we can look forward to him complaining that nobody's given him credit for his RECORD-BREAKING levels of empathy. Screw him, we're ready for some more BOAT HEROES, not all of whom are necessarily using boats, and not all of whom are in Houston.

For instance, we have this bunch of people who spontaneously came together to form a human chain and pull an elderly gent from his half-submerged truck, which was in danger of being swept away:

We keep watching this, and the thing we love about it? The enthusiastic passing of a life jacket down the chain, which arrives at the end after they've got the guy out of his truck and a strong guy is carrying him back to the freeway. They ended up not needing it, but that's not the point: Somebody had a life jacket on hand, and they sent it down the line, to help.

Also, a verbatim comment from Yr Editrix in the Wonkette Sekrit Chatcave: "And they carry him out of the water and they are all beefy big latino kids and I am not crying shut up fuck you." We wouldn't dare try to say it better.

The BBC has another angle, but darned if we can get it to embed, so go look and come back.

Jump In And Help

In Beaumont on Sunday, Nataly Avala and her friend Kristan Wade saw a car drive into a flooded underpass and begin floating into deeper water ... where it started sinking. Ms. Savala kept recording as Ms. Wade went to go help the driver out of the car:

Everyone's OK -- and then a longer cut of the video shows another damn pickup driving into the water and getting stuck. That driver got out on his own.

Those Nice Young Men On Their Jet Skis

And then of course there's the Jet-Ski rescue, straight out the door of the home of Karen and J.C. Spencer, which went viral AF all over the Twitters:

The Spencers were fine for the first few days of the storm, but then the water started rising into their home Monday. J.C. called up the Chick-fil-A restaurant where he and Karen are regulars, and asked for help:

"We had to get out of there so I called Chick-fil-A, now that sounds kind of funny," J.C. Spencer said in an interview on ["Good Morning America"] Wednesday. "I ordered two grilled chicken burritos with extra egg and a boat. And can you believe that one of the managers of Chick-fil-A, she sent her husband to pick us up and we are so grateful."

The couple said they were in the process of figuring out which of their most-prized possessions could fit onto the small rescue boat when the Jet Ski riders showed up and offered to take the couple to higher ground.

Sure, we want to cluck and say "it's only stuff," but we understand. And you take the baby pictures, of course. Easy call. Anyway, the Spencers are OK and they wish they'd gotten the names of the young men so they could thank them.

Canoe Doctor Is On The Ball

In Webster, part of the Houston Metro area, pediatric surgeon Stephen Kimmel had to get to Clear Lake Regional Medical Center Saturday to perform emergency surgery on 16-year-old Jacob Terrazas, who could have suffered permanent injury from testicular torsion if the operation were delayed too long. He tried driving in his own car, but the roads were flooded, then volunteer firefighters arrived to help him get to the hospital: first by canoe to a pickup truck belonging to one of the firefighters, then by truck until the roads were impassable, then by canoe again, until the firefighters saw people stranded atop their cars, needing rescue. Dr. Kimmel hopped out and walked the last mile to the hospital through waist-high water.

Jacob and his family had a heck of a time getting to the hospital for his operation, too: They were unable to reach it because I-45 was flooded, but the Webster Fire Department was able to get Jacob, his mother, and his sister to the medical center, where Jacob was prepped for surgery. When Dr. Kimmel arrived, he was drenched, and Jacob and his mom were a little unsure who the bedraggled soaking bearded guy was, as Jacob told CNN:

"It was kind of weird because I got there and I didn't know who was the doctor because I thought he was just like some, I don't know, just some dude," he said. "That's what my mom thought, too. And once he told me I was like 'oh, OK.'"

Jacob's out of pain and out of the hospital, and Dr. Kimmel's own home flooded later that day; his family was picked up by a Coast Guard boat and they're all dry in a hotel now.

So that's something to keep in mind if your commute seems slow, maybe.

Yr Wonkette is supported by reader donations. Please click the "Donate" clicky and we'll keep offsetting the horrible with the less horrible.