Canada Shame Report: It's Terrible Up North Now, Too 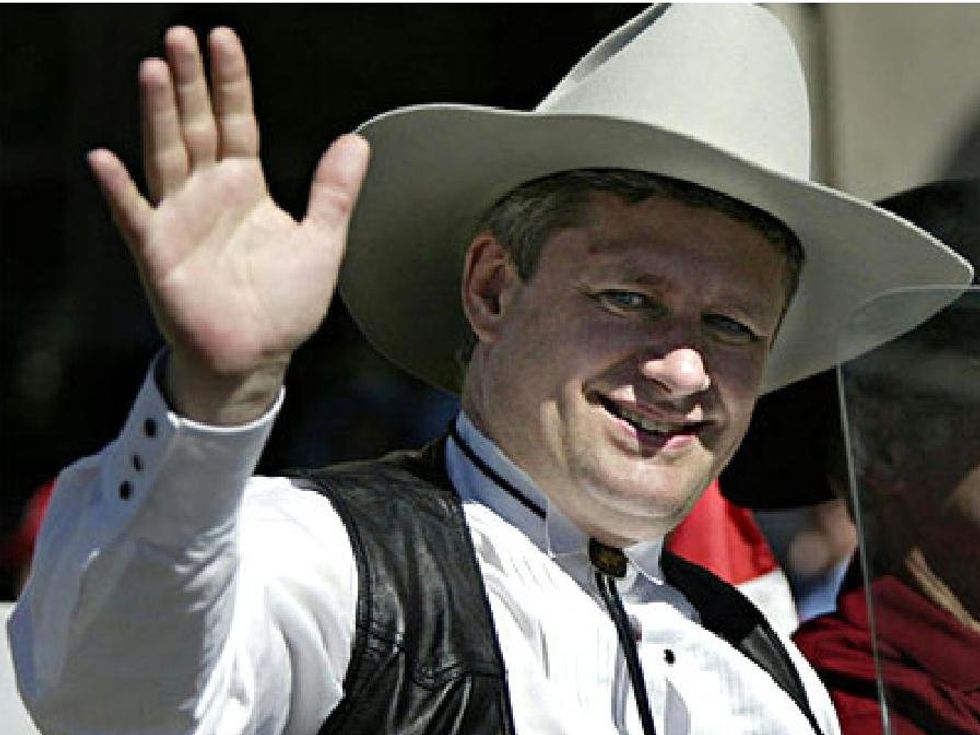 Good news, you Yankee slobs! The era of Canadian moral superiority is over, R.I.P., amen, etc. Has it not been adorable, for years, when we up in the icy hinterland would lay claim to some sort of intrinsic goodness that everyone just believed because, whenever necessary, we could holler about health care and gay marriage and dope that just washes up on the beach? Well, that ruse is over, and the truth can come out: Canadians are just as cynical and fearful and ideologically divided as you lagoon creatures down south. So, yes, we're all in this together and we're all terrible.

Also, hello! I'm Jordan Ginsberg, and I will be your new Wonkette Canadian Correspondent (WCC). What is Canada, you ask, and why does Wonkette need some communist snowman? These are all very good questions! The answer is in this linked picture.

Look at this lemon party. Jesus. What is even happening up in the Great White North? Well, Stephen Harper, the guy on the far left wearing the unfortunate helmet, is the leader of our Conservative Party and has been Prime Minister for, what, a hundred years now? Five? Sure.

But in last week's election, he finally won his precious majority government, meaning his band of hooligans is free to just go crazy and push through nonsense like a massive crime/imprisonment bill that completely ignores Canada's tiny crime rate (currently at a quarter-century low). Need to throw something in the furnace in our super-jails (coming soon)!

And the whole reason the election was called, basically, was because the our esteemed rulers were found in contempt of parliament, in part because they refused to disclose how much money they planned to spend throwing everyone in prison. Naturally, voters punished these monsters ... by giving them more power? Ha ha, everyone is doing a great job.

If the entire dumb process had one hopey-changey element, it was Kenyan Jack Layton's New Democratic Party of North Korea winning a bunch of seats after running an uncommonly positive campaign. He was rewarded for this, of course, by having a bogus story about him getting his peehole fingered during a massage back in the "good old days" leaked a couple days before the election.

So, that is your Canadian civics lesson. Now, whenever one of my countrypeople makes fun of you for electing George Bush or whatever, you can punch him/her in the taint/lady-taint and point out that Stephen Harper will, by the end of this term, have led our country for nine years, which, according to the metric system, is at least one year longer than your fake cowboy strongman was president. Next up: So many annoying, horrible things.

Jordan Ginsberg is a journalist in Canada somewhere. Also, according to his website, he is the Liberal Jew.