Carly Fiorina Admits She Was Wrong, Which Proves She Was Right, So There 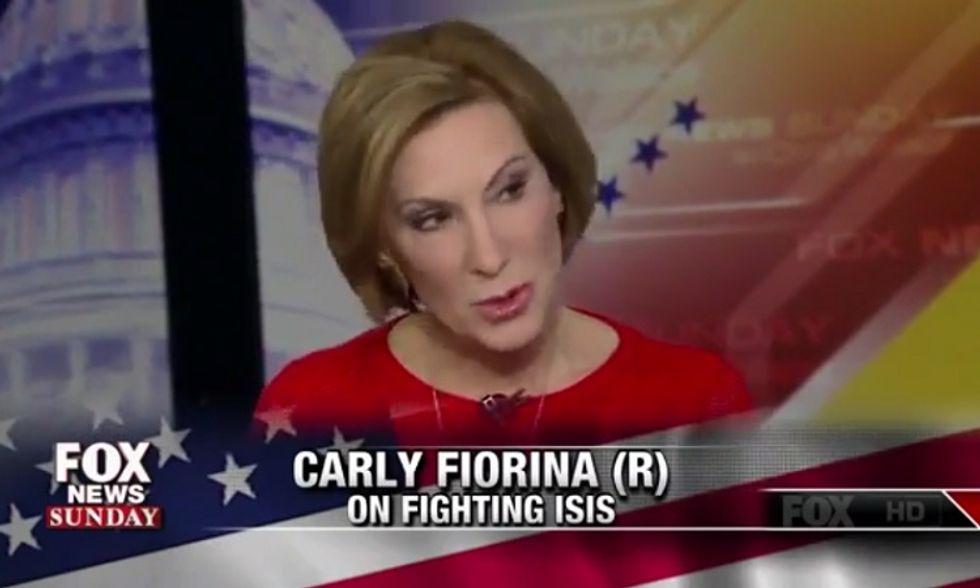 It's not lying. Carly just believes we're in a post-truth era.

[contextly_sidebar id="9RFrB95Ntj2XTaT6ERp3OUcg9qgIWtBj"]This might be a first: Carly Fiorina admitted she was wrong about something! Not as wrong as she actually was, but it's a start. On Fox News Sunday,Fiorina admitted she was actually incorrect in saying General Jack Keane, who retired in 2003, was one of five generals who had been forced into early retirement because they "told President Obama things that he didn’t want to hear." But she was also right, because he was still a member of the "Warrior Class," a phrase that really turns her on, and if he retired when George W. Bush was president, then Obama never listened to him, now did he?

Fiorina admitted, OK, sure, she got one name wrong, but was right about "four out of five" generals who all left the service because Barack Obama is a big wimp who won't listen to our military leaders (like the Constitution demands, of course). Wallace wasn't having it:

Well, three out of five. I mean, Petraeus really left because of scandal, an extramarital affair, also the mishandling of classified information.

Ah, but doesn't that simply prove Hillary Clinton is awful, which has fuck-all to do with whether Barack Obama is making war on the Warrior Class?

Mrs. Clinton still hasn’t been indicted over the same thing, so perhaps Petraeus’s dismissal was convenient. I don’t know; I would just say that Petraeus and Clinton are being handled very differently by this administration over arguably exactly the same issue, which was the handling of classified information over personal email.

[contextly_sidebar id="jRNNcyYE0v9xAN2raFitkuFFfTlTy2X9"]Um. No, not really? Or at all? Petraeus retired from the Army in 2008 when Obama appointed him director of the CIA, which implies Obama trusted him rather a lot. That's the exact opposite of getting fired for telling uncomfortable truths. Also, no, there are no military secrets in Hillary's emails and she hasn't let her girlfriend/biographer read them, either, which strikes us as so far from "exactly the same issue" that it will take several years for the light from "exactly the same issue" to reach Earth.

Rather than bother with trivial things like "reality," Wallace moved along:

Wallace: But then there’s Keane, who never served in the Obama administration, and says he’s never spoken to Barack Obama. Weren’t you just flat wrong about that?

Fiorina: I was wrong about Keane, yes. He’s the exception that proves the rule.

[contextly_sidebar id="1O2TYgYXSwpy2e3sVTnV4LFthYDUrtvS"]You are welcome to speculate on how her being wrong about Keane (and Petraeus ... and Stanley McChrystal, for that matter) proves anything about how right she was, but don't interrupt; she's on a roll:

I was certainly right about the fact that he is the member of the warrior class. I was naming the five warriors of our generation who have experience. Four out of five, I would argue, were retired early out of the Obama administration because they said things the Obama administration didn’t particularly want to hear, but all five of these generals have real experience.

[contextly_sidebar id="c2J31ZEXocsf9WQh0jOfR1Z5o2Zr0zrE"]So there you have it: I was wrong, which shows how very right I was, especially since these men were Warriors. America needs Warriors, and maybe some Spartans and Samurai, too, to keep us safe. And Obama simply keeps discarding perfectly good generals, because that's been part of the rightwing narrative for years now. On the bright side, at least Fiorina didn't claim Obama was purging the Warrior Class to make it easier for him to declare martial law and/or nuke South Carolina.

Even so, this marks something of a breakthrough in Fiorina's contentious relationship to facts. It will be a long road, but with years of therapy and careful guidance, it's possible she may someday be ready to become a functioning member of the reality-based community. Perhaps someday she'll even acknowledge she ruined HP. It's simply too early to tell, and the chances of a major relapse increase with every debate.