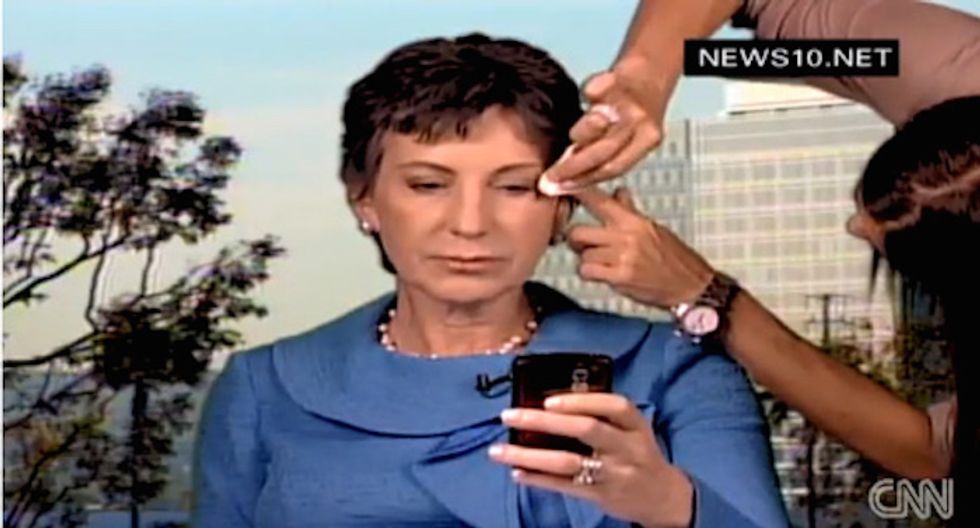 Poor failure-at-everything Carly Fiorina. She really wants to be president, you guys, and she's still eager to persuade America to want that too. But like everything else she tries to do, she is failing. Sad face. Super sad face.

Here's her latest attempt at seduction, which she pitched at the Iowa Freedom Summit, aka the "superdense mass of Dumb" this weekend, hosted by Rep. Steve King and Citizens United. [contextly_sidebar id="oPnxGSRFyC3zUe4GKufNZKY1ooruzBsh"]

“Like Hillary Clinton, I too have travelled hundreds of thousands of miles around the globe,” Fiorina told the crowd. “But unlike her, I have actually accomplished something. Mrs. Clinton, flying is an activity, not an accomplishment.”

What are Fiorina's "accomplishments" again? Hmmm. She practically murdered Hewlett-Packard, the company she used to run, before they gave her ALL the money to please go away and stop doing that. In 2010, when she ran for Senate in California, she got Barbara Boxered SO HARD that even though Boxer will be retiring and leaving that seat wide open, she has yet to suggest she's willing to take another stab at it. [contextly_sidebar id="8HlbuMQeRWqHpWpzjg9d4i0T8M7QR6Mw"]

Her plan to cash in on the GOP Lady Outreach racket, with her very own Unlocking Potential (UP -- get it?) Project has done about as well as you'd expect from a Fiorina project, except that she has yet to get the project to give her a bazillion dollars for failing at it. [contextly_sidebar id="1q2ethFptvOplbR60IIQKS5LZHj1VWXy"]

But still, she really wants to be president. Or at least she wants us to think that's what she wants. In November, she tried to start a rumor that there is a "Run Carly Run" grassroots movement begging her run. (Fun fact: There is not.) She even started hiring staff and everything! But when those utterly meaningless polls of who would win in a GOP primary fight  -- some loser or some other loser -- her name often doesn't even get a mention, unless it is followed by a "Huh? Who is that? Is that the Demon Sheep lady?" In a crowded field of pretender contenders that includes people like Ben Carson and Sarah Palin, that is really saying something. And that something is that nobody in America gives a damn about Carly Fiorina. [contextly_sidebar id="W9tF357uNexRQSyYhUBqVldXSa23mUP9"]

The saddest part for poor Sad Face Carly is that for all her rumoring and staffing up and going to all the right parties and saying all the right things -- "Boo, Hillary Clinton" and  "Benghazi!!!!" and  "Hey Ladies!" -- deep down in her icky place, she knows it.

“There is no doubt that as the only nonpolitician in the race, if I were to get in, that I have hurdles to overcome,” she told Politico earlier this month. But aside from being A Lady -- and we all know how Republicans feel about those, ugh -- she doesn't seem to have a very clear idea of what some of those other hurdles might be. Like how, among those few Americans who actually know her name at all, "Carly Fiorina" is synonymous with "FAIL."

“I’m extremely proud of what I did at HP,” Fiorina said, citing increased growth rates and cash flow during her tenure. “I will run on that record all day long.”

Yeah, she might want to reconsider that tactic. Because while she did very well for herself at HP, what with the approximately $40 million the board gave her to go the hell away, please, that's not exactly a record of "accomplishment" she should be touting if she wants anyone to take her seriously. If that counts as an accomplishment, then sure, she's got Hillary Clinton beat. Clinton never got paid that kind of money to stop destroying a company.

But then, we are talking about the woman who brought us the instant classic campaign ad about Demon Sheep and thinks her epic FAIL at HP is a record she should run on instead of something she should probably never bring up again. So maybe she doesn't really want us to take her all that seriously after all.