Carly Fiorina Will Win White House With Her Record Of Success. Also, Her Vagina 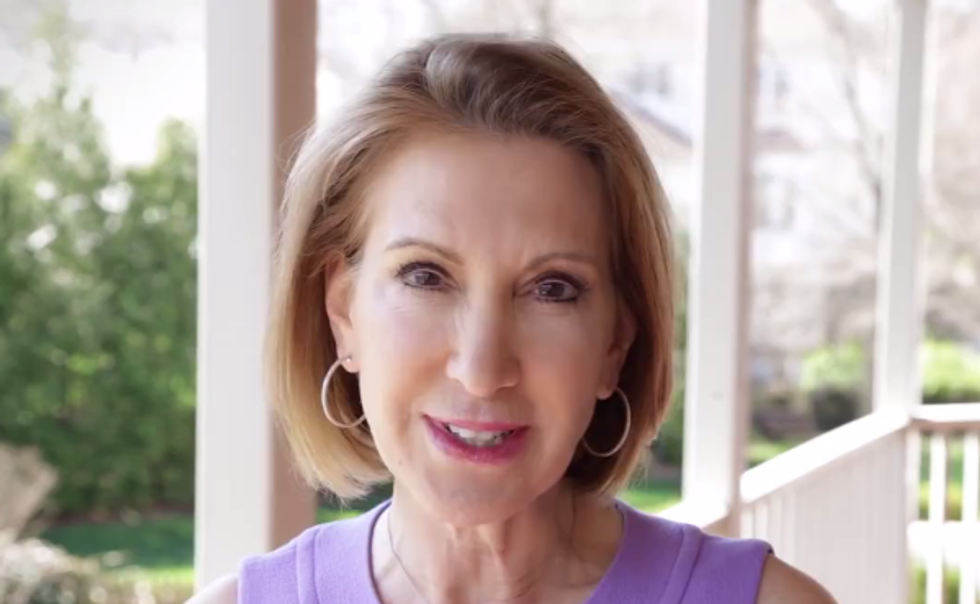 If you are an American who would love to see a woman in the White House, even though you do not care about gender because you just want the best man for the job even if he's a lady, good news! You do not have to vote for Hillary Clinton after all because Republican Woman Carly Fiorina (R-Woman) is officially ready to be The Other Woman, for Republicans:

Carly Fiorina plans to launch her presidential campaign on May 4, in an online announcement that dispenses with the pageantry that has become de rigueur in 2016 White House runs.

Ha, she is already showing us how different she is going to be from all those other candidates, except for the one who also dispensed with the de rigueur pageantry to announce her candidacy online, TOTAL COINCIDENCE. And except for the one who also plans to announce his candidacy on the exact same day, TOTAL COINCIDENCE AGAIN, because apparently May 4 is presidential announcement discount day or something. Reporters will certainly have a tough choice that day deciding whose pipe dream is more fun to cover -- Hewlett-Packard's most infamous failure or Dr. Ben Carson, the world's dumbest neurosurgeon.

But Fiorina has something neither Carson, nor the rest of the GOP field, has. She is a woman, you see, and if the Republicans nominate a woman, then the 2016 election won't be about gender at all:

So one of Fiorina's many qualifications is that she is a woman, which means she's uniquely qualified to talk about how being a woman is completely irrelevant. Nope, we do not see any flaws in that logic at all. But Fiorina's ladyparts are not her only qualification. There's also her stellar ability to lose elections:

Fiorina said she could run “based on my experience in California that you can win with people not because they agree with you 100% of the time on 100% of the issues but because they understand your core, they trust your judgment, and they believe that you have empathy and concern.”

In case you are scratching your head because you don't recall Fiorina winning anything in California, don't worry, you haven't gone insane. She has. Sure, she ran for Senate in 2010 -- and Barbara Boxer kicked her ass by double digits. Not exactly a close call. But Fiorina, whose greatest talent is pretending her failures are successes, sees it differently:

“I lost the general election, but I won more Republican votes, more Democratic votes, and more independent votes than virtually anyone else running anywhere in the country that year,” Fiorina said. (She acknowledged that the state’s large population boosted those numbers.)

Sure, California is the most populated state in the nation, so it's definitely an impressive feat that Fiorina garnered more raw votes than any candidates in, say, Wyoming. Sure, losing a race by 10 points hardly seems like something to point to as evidence that Fiorina is great at election strategy. But what else is she going to do -- run on her record as CEO of Hewlett-Packard, where she "right shored" about 18,000 jobs overseas, plummeted the company's stock, and was eventually forced out by the board of directors? Of course she is!

“I’m extremely proud of what I did at HP,” Fiorina said, citing increased growth rates and cash flow during her tenure. “I will run on that record all day long.”

Seems like Carly Fiorina has a brilliant plan to introduce herself to the majority of Americans who don't even know who she is. She's the one who almost killed HP, lost a Senate race in California, had a brief stint working for John McCain's 2008 campaign before she humiliated herself right out of that gig, and, importantly but irrelevantly, she's a woman, too -- not that it matters, because when you consider all her other qualifications, how can you not think she's practically got the 2016 presidential election sewn up already?