Carly Fiorina Won Happy Hour! Could Someone Explain Why? 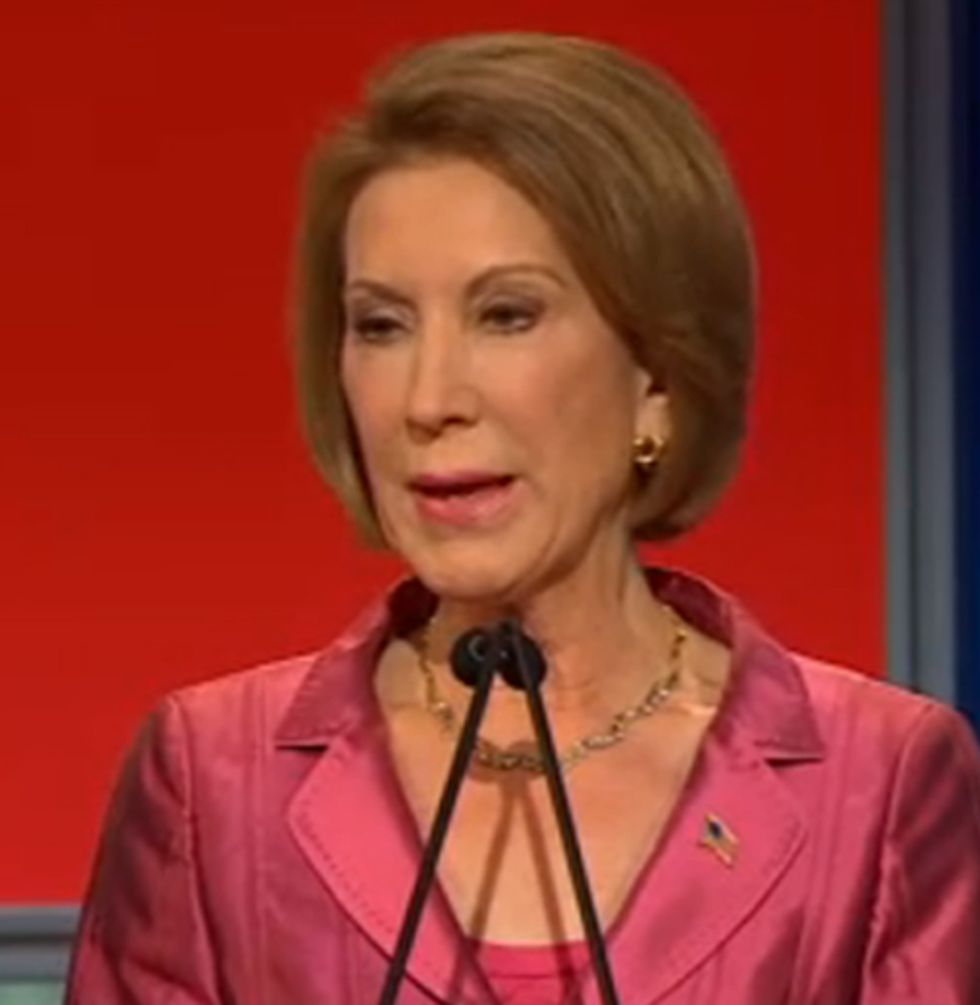 You can make those botoxed lips smile, you can do it!

America's political talkers had a simultaneous consensus-gasm following the Second Tier Loser's Debate Thursday night, and they proclaimed failed Hewlett-Packard CEO and losing Senate candidate Carly Fiorina the big winner of the hourlong ratings death march. We honestly have no idea why, except maybe it had something to do with her not being a complete stiff or a nebulous cipher. All we heard was the usual GOP nonsense in a slightly higher vocal register, and a complete lack of any Demon Sheep.

CNN's Mark Preston said she hit a "homerun" by "demonstrating a sharp knowledge of the issues as she stood shoulder to shoulder on a stage of former and current U.S. senators and governors." Vox's Ezra Klein called her "the most compelling candidate on the stage, by far[.]" And WaPo's Chris Cillizza said she stood out from the crowd because "she looked up to the moment. She was prepared and poised. She rarely glanced at notes. She spoke freely and easily. She had the 'it' factor."

But what the hell was that thing, anyway? Maybe it was a teevee thing, like Nixon and Kennedy? Yr Dok Zoom's desk actually doesn't face his TV set, so we mostly listened to the debate while helping out with the liveblooging, so we guess we missed her outstanding poise and confidence, and just had to go with what she was saying, which struck us as no great shakes -- there was that mildly effective but pretty predictable rip on Donald Trump right near the beginning:

Maybe it was memorable because nobody else's staff had handed them any especially zingy zingers?

Or maybe she sounded more confident and sincere in juggling one of the running themes of the debate, how to appear Super Tuff on Iran, even if other countries -- like our best pals the Saudis -- also support terrorists. She promised that on her very first day in office, she'd make two phone calls:

The first one would be to my good friend, Bibi Netanyahu, to reassure him we will stand with the State of Israel.

The second will be to the supreme leader of Iran. He might not take my phone call, but he would get the message, and the message is this: Until you open every nuclear and every military facility to full, open, anytime, anywhere, for real inspections, we are going to make it as difficult as possible for you to move money around the global financial system.

Grr! Tough! Not only that, but she informed us that "Iran is at the heart of most of the evil that is going on in the Middle East." This may be news to the Sunni extremists of ISIS, which is doing one hell of a lot of evil, not a bit of which is funded by the Shiite extremists in Iran. Not that anyone in the audience cares; she was serving up some Axis of Evil red meat, and it was delicious.

Even more terrifying than the thought of Carly FIorina with the nuclear launch codes.

So yes, we suppose Fiorina won by sounding appealingly unhinged but poised and confident, and by being the most soundly anti-Hillary person on stage, even devoting most of her closing "why you should choose me" statement to the many sins of Hillary Clinton. At the very least, now we know that she's got a strong chance of being chosen by President Rick Perry for Secretary of State.