Carter Page, We Found You A Girlfriend 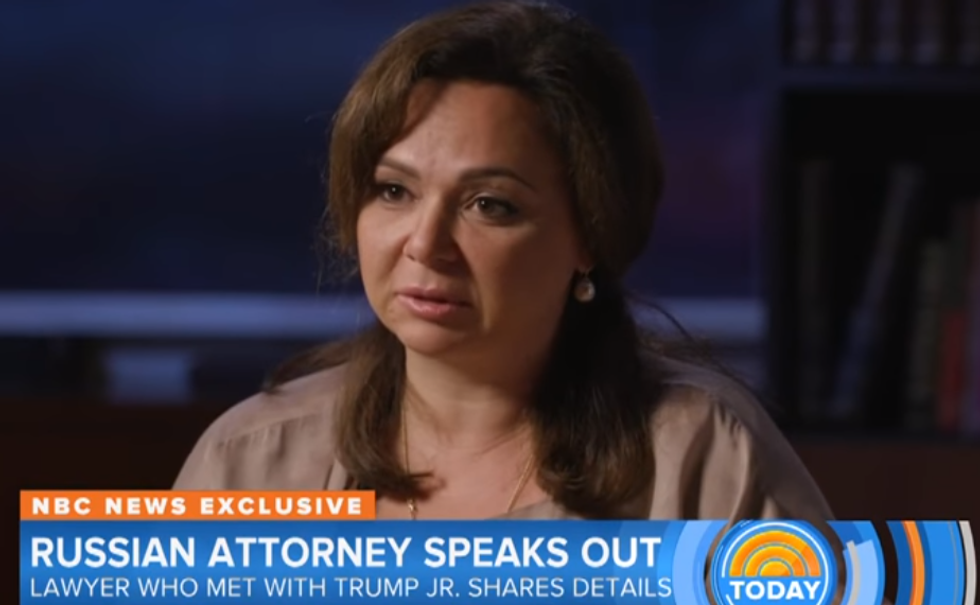 This is the new girlfriend we found for Carter Page.

Donald Trump Jr. is headed to the Hill today to meet with the House Intelligence Committee, so he can tell them all about the Russian collusions he did in his spare time during the 2016 campaign. We imagine committee members are happy to have at their disposal the written testimony Russian lawyer Natalia Veselnitskaya gave to the Senate Judiciary Committee, which has just been released. Veselnitskaya, of course, is the lawyer who came to Trump Tower in June 2016 with a flock of her closest Russian pals to meet with Junior, Paul Manafort and Jared Kushner, a meeting they were granted because Junior was promised hot, sexxxy Russian dirt on Hillary Clinton.

Reading through Veselnitskaya's testimony, we think maybe she and world's dumbest Russian intelligence asset Carter Page would be good as boyfriend and girlfriend, because her testimony, in places, is LI'L BIT BATSHIT, just like his testimony to the House Intelligence Committee was.

In case you can't read, a partial transcription:

... Donald Trump Jr. asked if I had any financial documents proving that what may have been illegally obtained funds were also being donated to Mrs. Clinton's foundation. I said that I did not and that it was not my issue. The meeting, essentially, ended there. Today, I understand why it took place to begin with and why it ended so quickly with a feeling of mutual disappointment and time wasted. The answer lies in the roguish letters of Mr. Goldstone. [...] Now that I know the kind of apocalyptic Hollywood scenario what a private conversation between a lawyer and a businessman can be turned into, I very much regret that the desire to bring the truth to the congressmen has thrown the US President's family, as well as Mrs. Clinton, into the whirlwind of mutual political accusations and fueled the fire of the morbid, completely groundless hatred for Russia.

Junior wanted to conspire to get Clinton Foundation secrets from the Russians SO BAD! (This is what happens to a person's brain when they survive on a diet of Fox News and other conspiracy theories.)

As to Veselnitskaya's complaints about "morbid" and "completely groundless hatred for Russia," meh, whatever.

We outlined in detail what Natalia Veselnitskaya's jam is several months back, explaining her crusade against the Magnitsky Act and its originator, Bill Browder. Magnitsky Acts around the world have been passed to punish the Russian government and its faithful oligarchs for human rights abuses, specifically stemming from how Russia (LOL "allegedly") murdered tax lawyer Sergei Magnitsky in prison in retaliation for Magnitsky and his client, Browder, uncovering MASSIVE BILLIONS OF RUSSIAN RUBLE FRAUD. (Veselnitskaya says every word of that is FAKE NEWS.) The Russian government views Magnitsky Act repeal as the first major step in getting rid of all the sanctions that prevent them from living even larger lives of crime and luxury than they already do. Much of Veselnitskaya's testimony is about that shit, and it's not worth your time.

Here's a part that's kinda crazy, where we learn that, despite what you may have heard, Natalia Veselnitskaya is not James Bond, and moreover, that Donald Trump Jr. wasn't even the son of a presidential candidate.

... Donald Trump, Jr. ... who then was neither the son of a US President, nor was he the son of a single presidential candidate from the Republican Party.

And our meeting did not take place in a safe house like in the James Bond movies, but in the Trump Tower in New York.

Veselnitskaya also takes issue with language in the email from Rob Goldstone to Junior, where he said the Russians were coming to offer incriminating Hillary Clinton dirts, as "part of Russia and its government's support for Trump." Who even says that? Natalia Veselnitskaya knows who says that, and it is FRANKENSTEIN:

"DOESN'T THE ABSURDITY AND IMPROBABILITY OF THE STORY BY THIS FRANKENSTEIN WRITER BECOME OBVIOUS?"

Another HOO BOY moment comes as Veselnitskaya describes what happened once Junior tweeted out all his Russian emails about his Russian meeting. Veselnitskaya, obviously, is completely innocent, but she knows who is guilty, and it is the American media, for using this to crucify the pure and wonderful American president and his totally above-board family:

Today I can say that the story of my meeting with the son of the US President in the form of which it is currently being cultivated in America is nurtured by the US media, and behind them and politicians there is a cheap, inciting and eerily irresponsible campaign. Aimed against the institution of the President as such, and ultimately -- at their people.

The heat of passion reached such a climax (as it seemed to me then) ...

THE HEAT OF PASSION REACHED A CLIMAX! IT SEEMED!

... [T]he American media simply destroyed their President using my name. For me, it was and still is a savagery: I do not care about who the US President is, but to destroy a person whom tens of millions of citizens have voted for using conspiratorial accusations just for a world show is a direct road to schism and mutual hatred ...

Funny how so many people associated with the Russian government (Veselnitskaya says she isn't, to which we reply "pffffffffffft") seem to feel that way!

The only other news in Veselnitskaya's testimony is that yeah, she's worked with Fusion GPS co-founder Glenn Simpson -- but not with the firm itself -- on a thing related to Bill Browder and the Prevezon Holdings Ltd. money laundering case she was litigating. This, of course, has absolutely nothing to do with the work Fusion GPS was doing with British spy Christopher Steele, which Veselnitskaya knew nothing about. To idiot Republicans, this information means HILLARY WAS THE ONE COLLUDING WITH THE RUSSIANS TO MAKE THE DODGY DOSSIER, but normal people who know how life works understand that a private intelligence firm like Fusion GPS might be retained by more than one client at a time.

According to Veselnitskaya's testimony, she has never met Carter Page, whose testimony to the House Intelligence Committee, we admit, was much more fuckbonkers than anything Veselnitskaya said to Senate Judiciary. But maybe they should meet up! Maybe they can get together to Testify 'n' Chill about how Russia and Trump are wonderful and America is mean and IT'S ALL A CONSPIRAC-AH!!!11!!!11!

Granted, for Page, the conspiracy is that Hillary Clinton is violating his civil rights by doing #Pizzagate to his Catholic faith, whereas for Veselnitskaya, the conspiracy is that mean Americans and Bill Browder are acting like Russia is "corrupt," when the truth is that Russia is an open society with a fairly elected government that doesn't rape, pillage or murder even a little bit.

But we feel like they could make their conspiracies work together and live happily ever after, don't you?