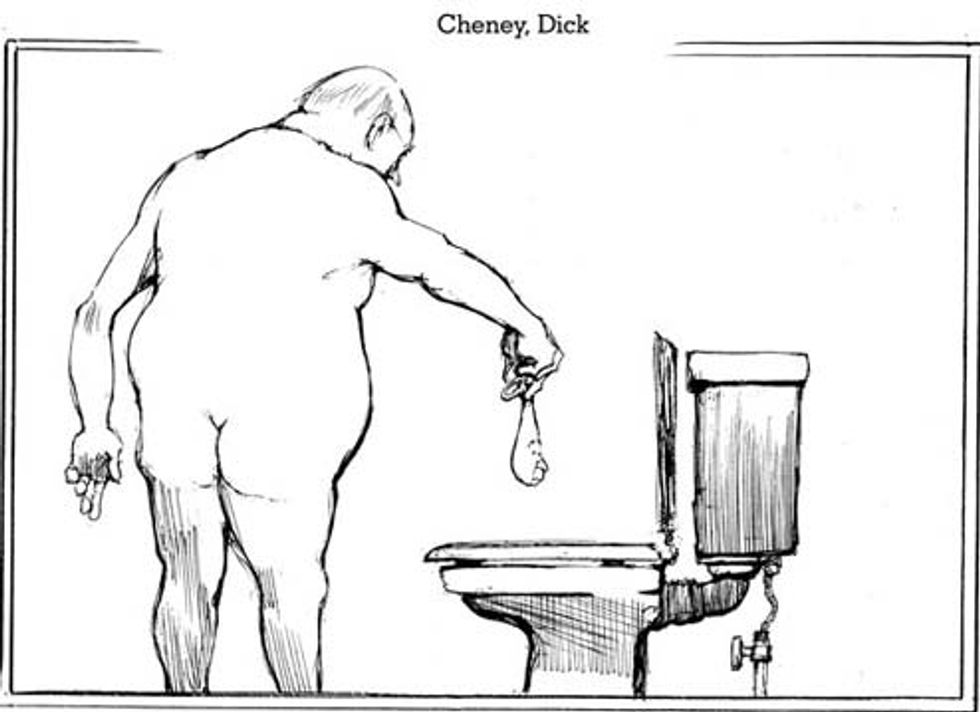 By the Comics Curmudgeon
Holy crap! Your Comics Curmudgeon got an email from Jack Stuef about "Retro Day" at Wonkette or some crap like that, and was all like, "Yeah, I could get in on that, good times," and then Stuef went and did it on Thursday, apparently unaware that Cartoon Violence was always, always written by your Comics Curmudgeon at some ungodly wee hour of Friday morning, so that Pareene or Layne or whoever could put it up the following afternoon. But why not catch the tail excitement of Retro Day by slapping this nonsense up when it was written rather than wait for the half-assed editing job that other people do? Jack won't be awake and posting until like 11 a.m. anyway. Ha ha, they'll regret not shutting down the accounts of former contributors now!

It is admittedly true that your beloved Comics Curmudgeon made some kind of drunken boast six months ago that he'd return with the political cartoons biweekly. But you know what? Political cartoons are awful! No, really! And not fun awful, like Mary Worth, but just regular old awful.

So, as soon as I (yes, let's dispense with the standard Wonkette third person plural/second person singular voice for the moment) started working my boring "real job," I stopped reading Slate's political cartoon thingamabob and haven't looked back since, and lord knows I wasn't going to ruin my night by wading through that shitshow now. Instead, I will share with my favorite of political cartoons through the years of having done this feature, or at least the ones that always lurk in my mind, in horror. For those of you who don't remember how this works, click on the thumbnails to make the comics bigger. (Thank God Slate never seems to get rid of any of the files on its image server!)

Having waded through these cartoons through parts of both the Bush and Obama presidency, I can tell you that after 2009 I actually came to sort of ... well, not enjoy, exactly, but sort of admire the more conservative ones. Something about being out of power makes the commentary more pointed and interesting I guess. And I've always had a soft spot in my heart for Glen McCoy's characters, with their rounded, weeble-wobble torsos and spindly limbs. Thus, when it comes to this cartoon, which depicts then-Senator Barack Obama in a dumpster behind an abortion clinic, knee deep in fetuses, bashing those that are still squirming in a ghastly parody of life with a baseball bat, I know I should be appalled, and I am, but I also feel something akin to ... awe? Yes, maybe awe is the right word.

Speaking of reproductive health issues, here's a cartoon about an eight-year-old who was fucking her boyfriend and then the condom broke and now she wants the morning-after pill, much to the distress of the pharmacist who is forced by a liberal government to enable her free-loving ways. What a little whore, am I right? Everyone knows that she should be carrying that accident-baby to term, for her sins.

Of course, for real madness, you have go overseas. This Russian cartoon depicts Paul Wolfowitz (ha ha, and remember him, and how Wonkette used to breathlessly report on his dating life? gross!) as some kind of monstrous vampire-vulture-Jew, puking money into the mouth of a sexy nurse/blow-up doll whose legs are suggestively spread apart. This was about, uh, Wolfowitz going to the World Bank, maybe? Does he still do that job? Man, just imagine the things this cartoonist is drawing about Dominique Strauss-Kahn, right now! (Pro tip: do not imagine it, you will scar your brain tissue permanently.)

As a side note, having run a foreign cartoon, this post now doubles up as a revival of The Foreigns.

Oh yeah, and this! We can't confirm that this political cartoon was actually drawn for Wonkette, but it was emailed to us without much by way of explanation by nationally syndicated cartoonist Jeff Danziger, and doesn't appear to have been published anywhere else. But what sort of explanation could this require? It's a cartoon about naked Dick Cheney flushing a semen-filled condom with George Bush's face on it down the toilet, and it should probably replace the long-outdated American flag.

Anyway, that's about all of this as I can handle, because unlike my carefree blogging days, I actually have to get up for a respectable job in the morning. See you in hell, suckers! And by "hell," I obviously mean "Apartment 3-G.”