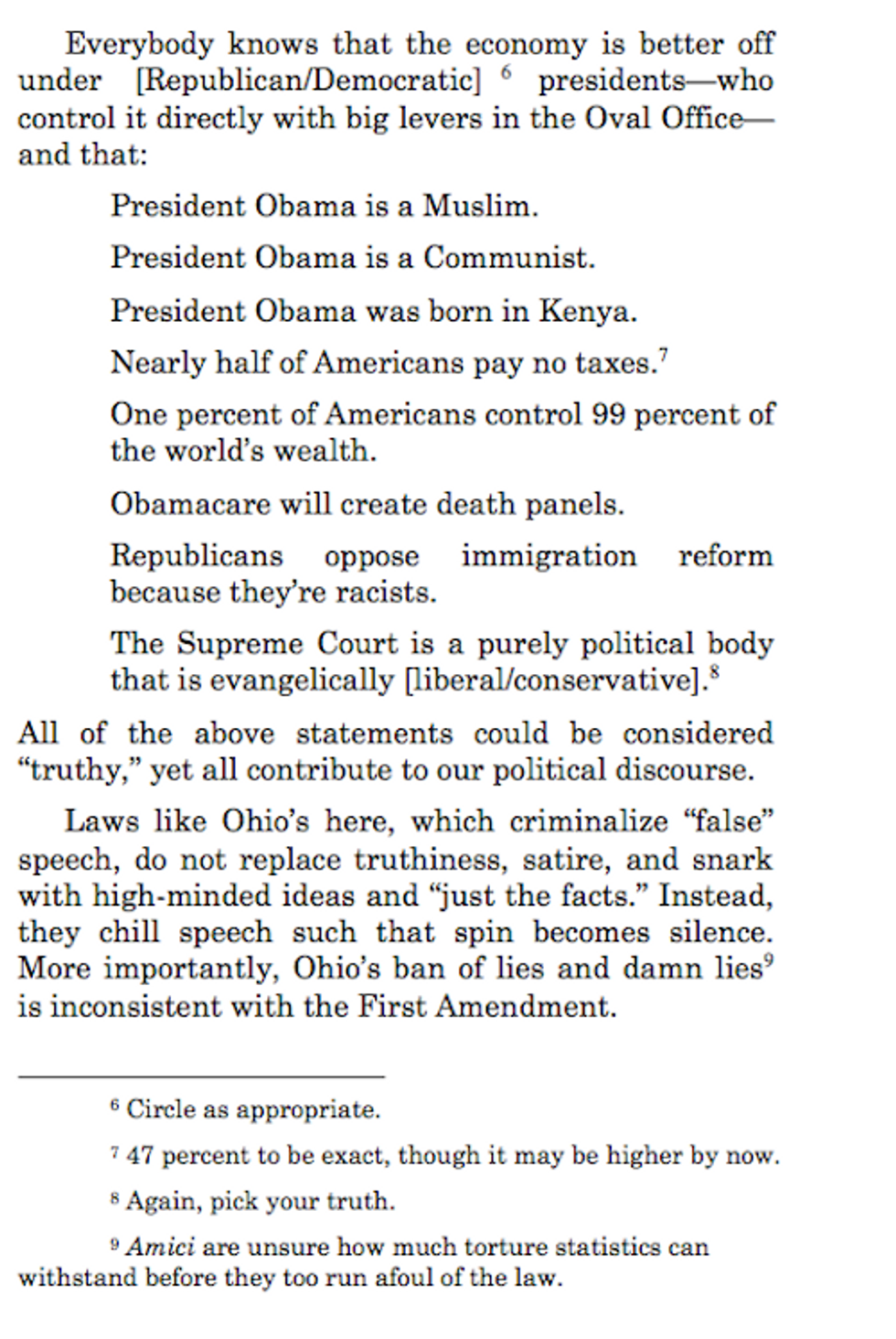 Earlier this year, the Supreme Court agreed to hear a case about whether Ohio's False Statement law, which prohibits making false statements about a candidate, is unconstitutional. This has, regrettably, meant that the Cato Institute has weighed in with a brief that they are sure is super-funny and we are sure is non-hilarious dreck.

First, a little bit on the lawsuit itself. The anti-choice advocacy juggernaut Susan B. Anthony List, (SBA) wanted to put up a billboard that said Representative Steven Driehaus, a Democrat, voted in favor of taxpayer-funded abortions because he supported Obamacare. Can you spot the problem? Did you answer "Obamacare doesn't allow for taxpayer-funded abortions?" YOU ARE RIGHT! Pat yourself on the back! But the SBA has a really complicated and tortured reason as to why that doesn't matter and they should still get their billboard.

Susan B. Anthony List denies that the ads were false — but is challenging the overall constitutionality of the restrictions on false political speech. The group also successfully beat back [a] defamation lawsuit filed by Driehaus in 2013.

“This lawsuit originated with the now ongoing problem of taxpayer funding of abortion in Obamacare. Driehaus was originally opposed to the Affordable Care Act because it did not contain specific language preventing the funding of abortion,” said SBA president Marjorie Dannenfelser in a Friday statement.

Does that sound a lot like “we know the statement is false, but truthiness and also nyah nyah nyah we will say what we want?” Yep. Now this thing has marched all the way up the Court ladder, but it is likely that it will be decided on procedural, not substantive grounds, because Driehaus was defeated and withdrew his election complaint, but SBA is very sure it could be hurt in the future if the law stands, so they sued. The Supremes will most likely base their decision only on whether SBA has standing to bring the case, as they haven’t actually been harmed by the law yet.

Now, we agree that this is a complicated thing to sort out, because figuring out what is true and false and what is merely hyperbole in campaigning is indeed tough, and the law may well deserve tossing for that reason. However, none of that matters, because the lawsuit has spawned the most unfunny friend-of-the-court brief ever courtesy of the libertarian Cato Institute and long-faded humorist PJ O’Rourke, arguing that the Ohio law would stop them from being the social satirist geniuses they are. When PJ O’Rourke is the best political satirist you can get to sign on to your brief about being funny people, you are in trouble. That is not to say that O’Rourke wasn’t funny at one time, but that ended around the same time Bush the First left office. Not according to the Cato Institute, however, which starts the brief with a short bio of O’Rourke that can only have been penned by O’Rourke and calls him “America’s leading political satirist.” Man, can we get Stephen Colbert or Jon Stewart to file a friend-of-the-court brief just to argue with that sentiment alone? Keee-rist.

How unfunny is this thing? It’s like a black hole of unfunny. It isn’t QUITE email-forward-from-your-uncle unfunny, but it’s close.

After all, where would we be without the knowledge that Democrats are pinko-communist flag-burners who want to tax churches and use the money to fund abortions so they can use the fetal stem cells to create pot-smoking lesbian ATF agents who will steal all the guns and invite the UN to take over America? Voters have to decide whether we’d be better off electing Republicans, those hateful, assault-weapon-wielding maniacs who believe that George Washington and Jesus Christ incorporated the nation after a Gettysburg reenactment and that the only thing wrong with the death penalty is that it isn’t administered quickly enough to secular- humanist professors of Chicano studies.

Aren’t the guys at Cato super-good at hyperbole and the funny? You are probably still slapping your thighs ten minutes later. Oh wait you are not because that is terrible. But that’s nothing compared to when they decide that the footnotes are an even better opportunity to share their extreme humor chops.

We’re sure that the Court clerks will appreciate the opportunity to peruse this example of comedy gold. We’ll be busy the rest of the day scouring court cases to see if you can be expelled from the Supreme Court Bar for writing something this awful.