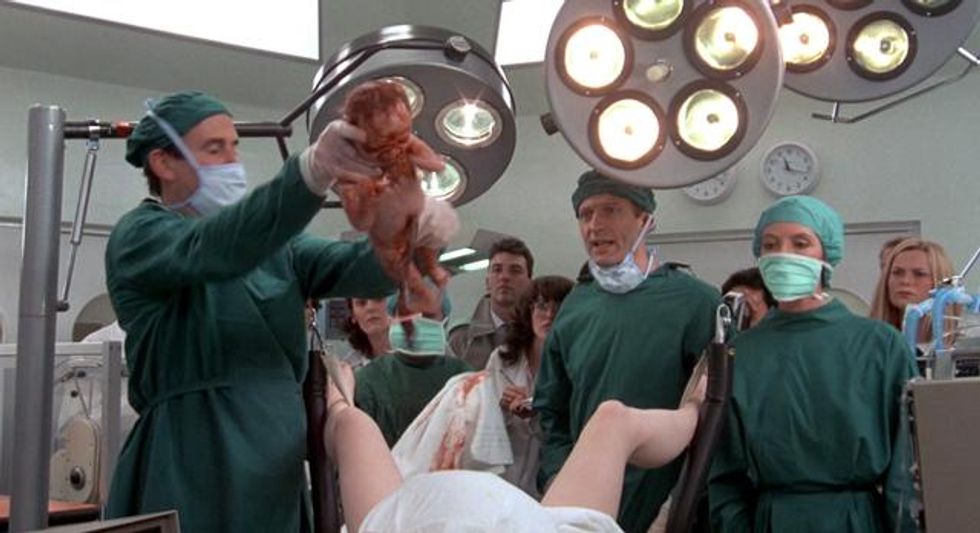 Oh what joy spread across the desiccated carcass of the once-great British Empire and her former colonies yesterday with the most anticipated birth since that geeky weirdo, whathisname, knocked up that hot girl on “Friends.” There were hosannas and fireworks and countless terrible jokes tweeted out and posted on countless Facebook feeds. Here at the Hall of Justice Wonkette World Headquarters there were blingees and much drinking, though to be fair that would have happened anyway, for Monday was a “day” on the “calendar” by which humans organize the “time-space continuum.”

Of course some people have to be killjoys and use the birth of even the most adorable product of centuries of cousin-fucking and inbreeding to slag on Britain’s unaccountably popular godless socialized healthcare system.

The lovely Duchess of Cambridge had barely finished gnawing through the umbilical cord as if noshing on the most delicate cucumber sandwich being served at low tea at Buckingham Palace before Michael Tanner at Tucker Carlson’s Internet Void of Human Nothingness put a damper on the festivities:

Britain spends much less than the United States on health care, a fact frequently trumpeted by advocates of government-run health care.

And where was Great Britain on that list? Her Majesty’s kingdom landed in twentieth place. That can’t be right because U-S-A! U-S-A! Let us just convert that ranking from the communist metric system…oh, we’re still #28.

But all those advocates of government-run health care who think that those systems are more egalitarian need to reconsider. One of the dirty little secrets of socialized medicine is that the rich, powerful and well connected seldom have to endure it.

Well duh. That’s also one of the benefits of being rich, powerful and well-connected in our own decidedly unsocialized system. But in Britain, even if you have to wait longer to see a doctor in an emergency room or forgo some elective procedure altogether, you also know you will not go bankrupt paying for care. You know if you become unemployed you will not have to shovel out hundreds of dollars a month for COBRA or some catastrophic-coverage-only plan with a four- or five-figure deductible.

It is a measure of how popular socialized medicine is in the UK that the major parties of the government argue over how best to reform the National Health Service. No one seems to consider ending it altogether and switching over to a more United States-like system. Because they are not self-centered Cato Institute libertarians.

Have some compassion for your less-fortunate countrymen, Michael Tanner. Or drink a dick. We don’t care.