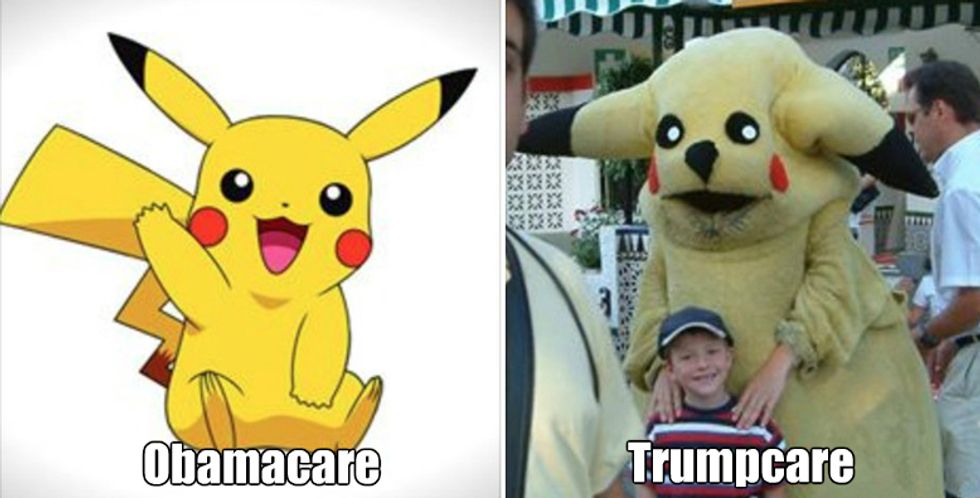 The Congressional Budget Office released a report Thursday projecting changes to the health insurance market for people under age 65 for 2017 and beyond, and in among all the analysis of health insurance coverage of all types -- excluding Medicare, obviously, since that's a whole 'nother report -- we learn that one of the top drivers of premium increases for Obamacare is insurers' uncertainty about whether the government will actually make cost-sharing reduction payments it's required to. And while that's the big News Takeaway from the report, there's also a bit of good news in the report as well: Even though the Trump administration is doing what it can to wreck the ACA, the individual marketplace is nonetheless pretty resilient, and isn't about to collapse under its own weight like Republican doomsayers insist. Whether the ACA can withstand sustained Trump administration fuckery is another matter.

Let's real quicklike review the two ways insurance costs are supposed to be kept down for individual plans on the state and federal exchanges:

1: Income-based tax credits to subsidize the monthly premium costs. These are automatic, and Trump can't screw around with them. Since the subsidies go up when premiums go up, that mostly shields individual consumers from higher premiums, except for folks who make too much to qualify for subsidies.

2: Cost-Sharing Reduction (CSR) subsidies paid by the government directly to insurance companies. These reduce out-of-pocket costs like deductibles and co-pays for ACA enrollees who earn under 250 percent of the poverty level. They're also the suckers that Trump has been threatening to diddle with since he got into office.

While the CBO doesn't come right out and say Donald Trump is deliberately trying to fuck around with CSRs, because CBO is far more respectable than some commie mommyblog, it does say that in the kindest possible policy-wonky way, on pages 2-3 of the report:

Copied and smooshed together for space; 'JCT' is the Joint Committee on Taxation

That's about as close as a government agency is ever going to come to saying, "If Trump would just make sure these payments continue, the premium costs would remain stable." As to the increase of areas where only one insurer is in the marketplace, the report again lays the blame for insurers leaving the markets partly on instability caused by the administration's heinous fuckery most foul:

So while plain old market forces may be part of the reason insurers leave the individual markets, they're also being pushed out by Trump, who then proclaims Obamacare is failing. It's classic Small-Government Conservatism: Wreck government programs, then complain government doesn't work so we need to get rid of government.

Elsewhere in the report, the CBO projects that while about a million more people will sign up for plans on the exchanges -- increasing from 10 million total people covered on the exchanges in 2017 to 11 million in 2018 -- 2018 gains in enrollment will be

limited by projected premium increases due to near-term market uncertainty and by announced reductions in federal advertising, outreach, the enrollment period, and other enrollment efforts, which push enrollment down.

Are You Ready For Obamacare Open Enrollment? The Trump Administration Sure As Hell Isn't.

With open enrollment for 2018's starting in under three months, Team Trump has no idea what it's doing. See, government healthcare doesn't work!

As we've pointed out, Trump's Department of Health and Human Services is doing what it can to sabotage 2018 ACA enrollment by cutting the open enrollment period in half, to just 45 days, and by slashing as much of the support machinery behind getting people enrolled as possible. Instead of helping people buy insurance, HHS is doing all it can to force people to navigate the marketplace without any assistance. (Happily, nice folks on Twitter and Facebook have been churning out infographics for citizen-activists to copy and share.)

As the indispensable Sarah Kliff sums it up at Vox,

President Trump has often described the Affordable Care Act as “imploding on its own.” The CBO report suggests this isn’t the case at all; rather, the Trump administration is making specific policy decisions that are leading to an individual market that will be less functional, with fewer people signed up and higher premiums for those who do enroll.

New CBO Report: Nobody Knew Killing Healthcare Was So Complicated!

Here's an impressive thing: Obamacare is actually hard to kill without actually repealing it.

But we did mention there's some good news to be found in the CBO report, and that's that, as we noted back in August, the ACA was actually designed to be partly resistant to political tampering, and this report bears that out. While administration attempts to destabilize the individual markets by threatening to not pay the CSRs are definitely having an effect on premium costs, for instance, the other cost-containment mechanism in the ACA, tax credits to subsidize premiums, will largely offset those increases for individual consumers, and for that matter, help keep the markets stable over time and to limit the number of insurers leaving the market:

And that's not all: Assuming the Trumpsters can be kept from fucking up the markets further -- and that is the biggest "if" of the next three years -- the overall trend for insurers in the individual exchanges is pretty good, too:

And one last nugget of good news, though it's not entirely new: You know how Republicans like to slam the CBO for having over-predicted by half the number of people who'd sign up for individual plans -- 10 million instead of 20 million? As we've mentioned before, that's a beautiful example of lying with statistics: The real reasons fewer people went to the individual market were that 1) many more businesses kept their employee health plans than the CBO initially estimated (CBO expected more would drop insurance and leave employees to buy their own); 2) The tax penalty for the individual mandate was delayed, so more people said the hell with it and didn't bother signing up; and 3) More people ended up getting new insurance through Medicaid expansion than through the exchanges.

Of course, that explanation required many more words than just yelling "The CBO's estimate was off by HALF!" Nevertheless, the new report has some additional data on employer-based insurance: Since wages have been rising for the last few years (NO DONALD YOU DON'T GET CREDIT), more people are getting and keeping insurance through their employers, so CBO predicts fewer employers will drop their insurance coverage and shift employees to the individual markets. In essence, the fear the ACA would make millions of people lose their work-based insurance never materialized.

So, TL;DR: mixed news on what Trump's trying to do to Obamacare short of repealing it -- there are his efforts to sabotage the individual markets, but the ACA also seems to have been designed to resist such political fuckery, at least to some extent. Now, all we have to do is make sure the bastards don't succeed in a last-gasp attempt to murder Obamacare altogether, and then get to work on strengthening it.