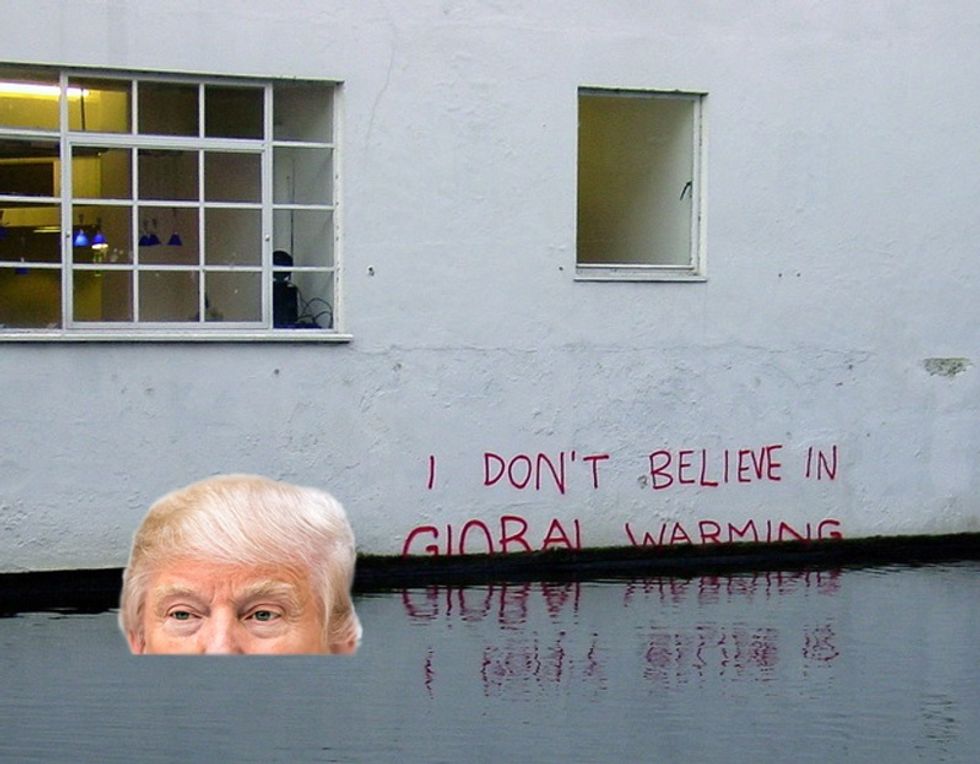 One of these days I gotta learn to do water reflections & ripples...

Buried in all the crazy of Mad President Snapcase's first week in office was a completely insane little speech on the floor of the House Tuesday by Lamar Smith, the Texas troglodyte who serves as the head of the House Science Committee (Motto: "Science-Free Since 2011"). Now, he only had a minute to speak, but he had a LOT to say, mostly about how if you really want to know what's going on in U.S. America, you should skip the lies of the fake lamestream media, and listen to the only person who really knows what's going on in this big crazy world: Donald Trump.

"Just think what the media would be saying about President Trump if he were a Democrat,” Smith said during the evening time reserved for one-minute speeches. “He has tremendous energy. He campaigned for 18 months, puts in 15-hour days, and has the stamina of a bull elephant, like Teddy Roosevelt. He is courageous and fearless. Given the amount of hate directed his way, no doubt he constantly receives death threats, but that doesn’t curtail his public appearances or seem to worry him in the least."

Remember when the media were always singing Hosannas to Barack Obama, even though he spent fully 130% of his time golfing or on vacation, and never accomplished anything? For heaven's sake, he even left a vacancy on the Supreme Court open for nearly a year!

But the most important thing about Donald Trump is that he'll always tell the truth, Smith explained, like about crowd sizes and whether it was raining at his inauguration. Stuff the media never even tell you, like how the economy was in terrible shape, but Donald Trump turned it around before he was even in office:

“The national liberal media won’t print that, or air it, or post it,” Smith said. “Better to get your news directly from the president. In fact, it might be the only way to get the unvarnished truth.”

If, of course, by "unvarnished truth" you mean things Lamar Smith also knows to be true, like how global warming is a myth and scientists are sneaky liars who make stuff up to push a socialist agenda and keep every American from having their own coal mine or oil well like they want. As Vox's David Roberts points out, Lamar Smith is a guy who knows the ugly truth about science, which is that it is often bad for profits, and therefore wrong. Under Lamar Smith, the House Science Committee has used its subpoena powers to launch "investigations" that are little more than harassment of scientists, agencies, and groups that come up with wrong conclusions -- which would be any conclusions that might cause an oil, gas, or coal company to lose a penny of profit.

One of his more notable targets was scientist Thomas Karl of the National Oceanic and Atmospheric Administration (NOAA), who published research in 2015 showing that the much-hyped global warming “pause” hadn’t actually happened.

Smith began hassling NOAA, demanding not only the data and methods behind the paper (which were already posted on the internet anyway) but all email communications related to the paper’s research and publication (which NOAA refused to give). That led to a giant brouhaha, during which Smith openly accused NOAA of fraud and threatened NOAA administrator Kathryn Sullivan (the first woman to walk in space) with criminal charges. You can read all about here and here.

So somebody walked in space -- big deal! Does it mean they know anything about the Chinese plot to fake global warming data?

Smith and his pals on the House "Science" Committee -- more formally known as the House Committee on Science, Space, And Technology -- have certainly done all they can to protect America from the pernicious effects of "science," like slashing funding for studying the climate. If there's no authorization for studying global warming, then there's no such thing!

It's held hearings on the uselessness of government-sponsored science that didn't include testimony from a single scientist. The "Science" Committee retweeted a fact-free article from Breitbart, which is, like Donald Trump, the only source you need for your information. But Lamar Smith doesn't think climate change is a hoax, exactly -- he simply doesn't think we need to rush into doing something about greenhouse gases just because 97 percent of climate scientists think it's real. Couldn't we wait until things are a little more settled, and the scientists and lobbying groups who work for oil companies are convinced, too?

Oh, and Smith also wants the peer review process to be democratized, so that internet trolls can weigh in on climate studies. Don't their opinions count just as much as so-called "experts'"?

In conclusion, if you can't trust Donald Trump to tell you the truth about climate change, and why hairspray can't affect the ozone layer, which he thinks is the same thing, then why don't you move to China, huh?