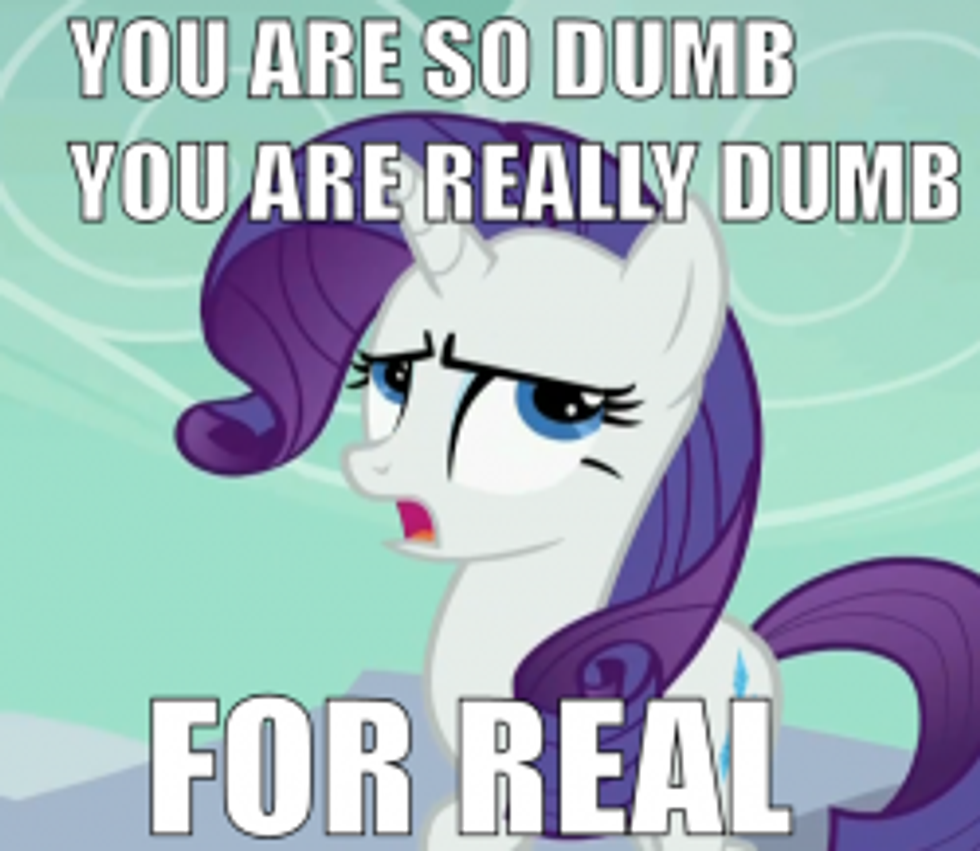 Charlotte Allen, theIndependent Women's Forum writer who's mostly known for a notorious 2008 column about how silly women just couldn't help voting for Barry Obama because women are just such dumbbunnies, has "a suggestion for cutting short the GOP angst" in the wake of Obama's reelection: The Republicans should just go ahead and give Sarah Palin the 2016 nomination right now. She's so certain of the self-evident wisdom of this recommendation that she immediately follows it with "You think I'm joking? Think again."

OK! We find your ideas intriguing! Tell us more! Also, do you have a newsletter?

First off, Allen needs to disabuse you silly fools of the "conventional wisdom" that Palin somehow hurt John McCain in 2008. That is simply not the case, she says, because science:

A national exit poll conducted by CNN asked voters whether Palin was a factor in their voting. Of those who said yes, 56% voted for McCain versus 43% for Barack Obama.

Myth BUSTED! Besides, look how badly Mitt Romney, the GOP's so-called " serious" candidate, did in 2012 -- he actually garnered fewer votes than McCain in 2008, which somehow proves something about the legitimacy of a Palin run in 2016. And here is what it proves:

Gabriel Malor, writing for the New York Daily News' blog, pinpointed another reason: By focusing his campaign mostly on serious economic and political issues such as the national debt and tax incentives, Romney failed to take into account the fact that large segments of the electorate neither know nor care much about serious economic and political issues.

OK, got that? Potential GOP voters were turned off by the serious intellectual heft of Mitt Romney's serious focus on serious economic and political issues. Because god knows, the 2012 election was all about a sober discussion of the details of policy. So if those egghead "big ideas" don't attract voters, what lesson should the GOP learn from the 2012 results?

What they — a group sometimes euphemistically called "uninformed voters" — do know and care about are the tugs on their emotions, fears, revulsions and heart strings provided by hours and hours of uninterrupted television watching.

Good heavens, Ms. Allen! That is indeed an insight: A huge chunk of the electorate is made up of mouth-breathing morons. We need to find someone who will appeal to their basest emotions. How about Sarah Palin?

Allen also neatly dismisses Obama's victory, which couldn't possibly have anything to do with his political positions, because, as she has established, most of us are morons who vote solely based on emotion. Stands to reason, because Barack Obama is simply such an emotional fellow:

The Democrats understood how to reach that constituency. When a barrage of Obama campaign TV ads told them that the GOP wanted to take away their contraceptives or that Bain Capital killed someone's wife, they took notice. When Obama strolled the hurricane-stricken beaches of New Jersey in his bomber jacket, they were snowed.

Of course -- because nobody in the GOP was actually calling women sluts for thinking that insurance should cover contraception; that's just nuts! Do go on.

Palin can more than keep up with the Democrats in appealing to voters' emotions. Hardly anyone could be more blue collar than Palin, out on the fishing boat with her hunky blue-collar husband, Todd. Palin is "View"-ready, she's "Ellen"-ready, she's Kelly-and-Michael-ready

And no one will notice that she is not, and has never been, "putting-two-consecutive-thoughts-into-a-coherent-sentence"-ready, so she's golden!

Still, Allen acknowledges that Sarah Palin may just face a couple of trivial obstacles, but it is manifestly evident that only Bad People (elitists, mostly) could find fault with her:

Sure, there is going to be never-ending nastiness from the left, but she's already lived through that once. Katie Couric? A has-been. Tina Fey? Her shtick was already wearing thin in 2008.

OK, Evil Rad-Fem Smarty/Bossypants Stalking Horses deployed. Who else must be dismissed, Charlotte?

There are also the snooty East Coast Republican intellectual types, such as Peggy Noonan, who look down their noses at a woman who doesn't shop at Neiman Marcus and didn't attend an Ivy League university. But Peggy made a fool of herself calling the election for Romney on Nov. 5. Who's going to care what she and her ilk have to say next time?

If conservatives are going to start ignoring everyone who made fools of themselves calling the election for Romney, then Fox News is in big trouble! But never mind, she's on a roll:

Some Republicans will say Palin has too much baggage from 2008, and we need to look for a new Sarah Palin. But I don't see what's wrong with the one we've got. Ever since the 1990s, Republicans have been looking for the next Ronald Reagan. Reagan is now revered in bipartisan circles, but during his presidency he was, like Palin, ridiculed by liberals. They cited "Bedtime for Bonzo" and sneered at his no-name college degree.

Sarah Palin is the new Ronald Reagan: charming and affable and unwilling to back down if she's right. I can't see what's wrong with that.

The really scary thing about Charlotte Allen's column is not that she thinks Sarah Palin is ready for a huge comeback, it's that she has so nakedly identified the reason for it. We are tempted to call Allen some sort of newfangled Diana Moon Glampers here, but we're already worried enough that we'll be sent to a re-education camp after these folks take over. No sense further condemning ourselves through gratuitous Vonnegut allusions.