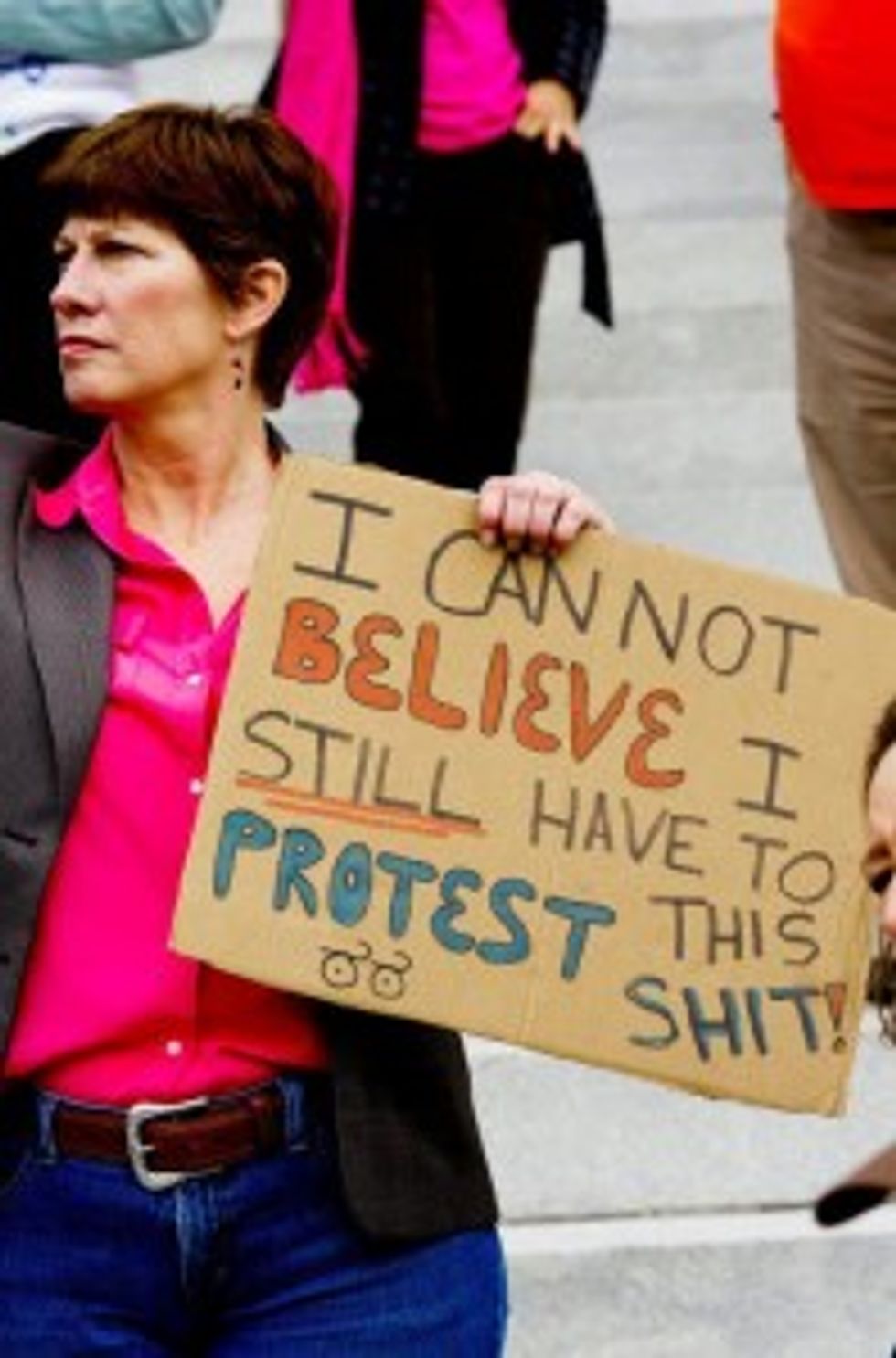 Remember how, back in 2009, the "pro life" movement was horrified when its constant harassment and threats toward abortion providers inspired an extremist tomurder Dr. George Tiller, and how it rethought those strategies in the wake of the killing? Yeah, neither do we.

Four years on, a new clinic is opening to provide abortion services again in Wichita, Kansas -- and even though the clinic will not be providing the late-term abortions that supposedly made George Tiller just like Josef Mengele, the death threats and harassment toward clinic employees have already kicked into high gear. We are not finding a lot of funny in this story. Will rage do?

The new clinic's executive director, Julie Burkhart, has been harassed at her home; one witty fellow, now the subject of a restraining order, was marching around outside with a sign reading "Where is your Church?" Get it? Cause Tiller was shot to death at his church? (Also, too, the same guy, a fixture in Wichita's extremist "pro-life" crowd, explains that Tiller wasn't actually murdered in a church, because any church that isn't 100% against abortion is "an apostate church," and hence not really Christian.)

And then there's David Leach, of the "Army of God" (because sometimes God, despite the whole omnipotence thing, just isn't quite fast enough when it comes to smiting those that need a good smiting), who went to interview Dr. Tiller's murderer, Scott Roeder, in prison, and did a little speculating about how Julie Burkhart would only have herself to blame if -- and he's just spitballing here, mind you -- someone went and put a bullet through her head. Transcript follows, but if you can stomach it, audio is worth a listen, if only for Roeder's delighted laughter at the prospect of someone following his example.

We are especially awed by Leach's suggestion, in a conversation where both men are saying, "Will no one rid us of this turbulent clinic owner?" that Julie Burkhart is engaged in an unconstitutionally provocative act by providing legal medical procedures.

Leach: If someone would shoot the new abortionist like Scott shot George Tiller back in the Operation Rescue days, people called him Tiller the Killer, hardly anyone would appreciate it, but the babies. It will be a blessing to the babies, everyone else will panic. Of all places to open up a killing office, to reopen the one office in the United States more notorious for decades than any other is an act of defiance against God and the last remaining remnants of reverence for human life. It is what the Supreme Court classifies as “fighting words,” like throwing lard in a Mosque, burning a cross in a Black neighborhood, or immersing a cross in urine at taxpayers’ expense. It is a reckless act. It is not the act of someone who values their own safety. It is a gauntlet thrown down, by someone who wants a fight. Of course, I don’t know if anyone will pick up the gauntlet. I didn’t know Scott would act, before he did.

Roeder: It is a little bit death-defying for someone to walk back in there. For Julie “Darkheart” to walk back in there and reopen a murder mill where a man was stopped. It’s almost like putting a target on your back, saying, “Well, let’s see if you can shoot ME! I have to go back to what Pastor Mike Bray said: If 100 abortionists were shot, they [surviving abortionists] would probably go out of business. I think eight have been shot, so we’ve got 92 to go. Maybe she’ll be number nine. I don’t know, but she’s kind of painting a target on her.

We're no attorneys, and while we're waiting for our Big Break so we can actually be paid members of the ACLU again, that sure as hell sounds like it's edging up to the very limits of the First Amendment, innit?

So anyhows, David Leach is walking around and saying people need to die, and clinic managers and employees are living in fear.

If you have a joke, by all means now would be the time to share it, as we are, sadly, plumb out.

[Correction: Article originally referred to clinic owner Julie Burkhart as a doctor; she is not an MD, but a longtime abortion-rights activist with a lot of guts. --Dok Zoom]