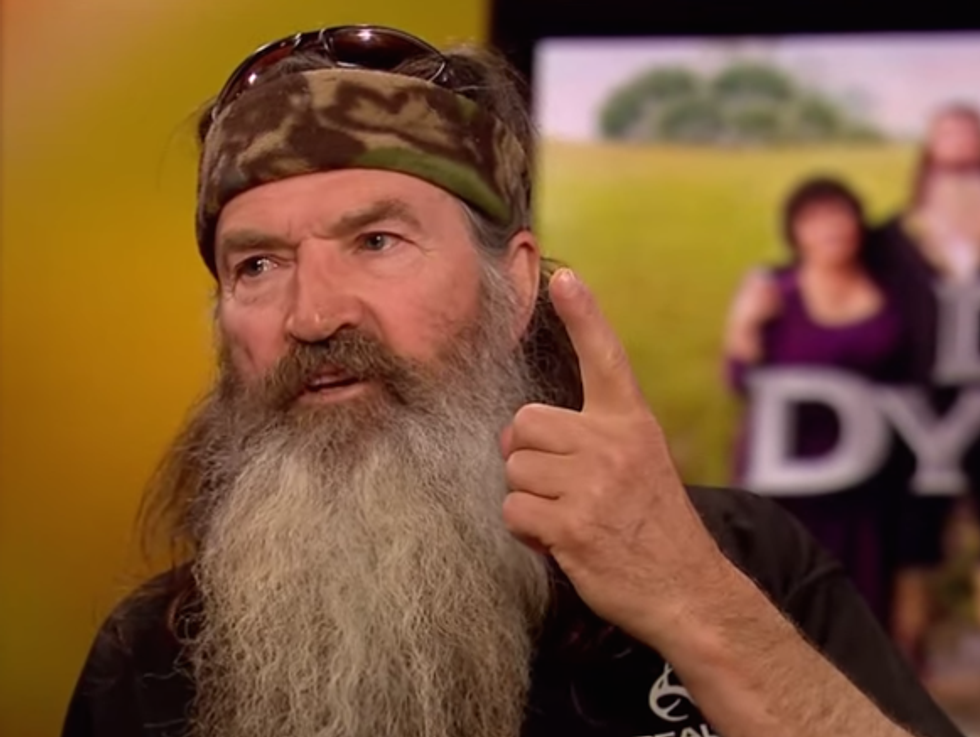 Noted public intellectual Phil Robertson, of the Duck Dynasty Robertsons, spoke at the Western Conservative Summit in Denver this weekend, and there he laid down a very strong argument for the historical existence of Jesus. Did he bring up the writings of Josephus or Tacitus or the letters of Pliny the Younger? HA, no. No, you see, Phil Robertson is sure that Jesus existed, and was the son of God, because CALENDARS. You know, because the Gregorian calendar uses BC (Before Christ) and AD (After Christ) (joke, people, we are joking) to count the years, and ain't no one else got the division of years named after them.

“If your calendar is dated of all the human beings who have ever walked on the Earth, and your calendar is dedicated and predicated to just one of ’em, evidently something rather large went down,” he explained.

I am going to try and make this as quick and painless as possible: That method of dating wasn't established until 525 CE when Dionysius Exiguus, a Christian monk, decided that Christians shouldn't be using the Diocletian Era calendar to figure out when Easter occurred, as that dude's whole thing was persecuting Christians. So he did some Nancy Drew-ing, figured out approximately when Jesus was born and then called that Year One. It wouldn't even become a super popular method of dating things until Charlemagne came around and started telling everyone to use it.

Conveniently, for his sake, the Julian Calendar had been set up by Caesar only 45 years before Jesus was born, meaning that he didn't actually have to do that much work. He just had to go "OH, I think Jesus was probably borned 525 years ago, so I will start the calendar at that date," and BAM, Anno Domini!

Also, at this time, years were named by whatever Roman consul was in charge that year. So, actually, lots of people have had eras or years or whatever named after them.

Now, I'm not debating the existence of a historical Jesus, just the fact that it's not like Jesus was born and people were all like "Hooray! A new era!" and started counting from 1. That is not how it happened at all, and of course Jesus's life was historically significant to a Christian Monk. However, I could make up a calendar in which the year one was 1160 CE, the year Robin Hood (neé Robyn Hode) would have been born, and it could become commonly used, but that would not "prove" that Robin Hood existed.

After that fun-filled history lesson, Robertson then went on to talk about how more people were murdered in the US during the time frame of the Iraq war than died in that war.

Huh! And where was he going with that? If you guessed "blaming gay and trans people for that," you would be correct!

Phil robertson who's behind itby DailyPolitics

According to Robertson, one the main causes for all of those "murders on the street" during the Iraq war was the Supreme Court's decision to legalize gay marriage... last year. So apparently, all those murderers were totally psychic, and knew to start murdering people because of gay marriage several years before gay marriage was even legal.

"When you allow men to determine, as Zach said, what's right and what's wrong, you get decisions like the five judges who said I may not know we have 7,000 years of history of men marrying women. A male and a female. For that reason, they’ll leave their father and mother and cleave to one and other and become one flesh. I know it’s been that way for 7,000 years, but we know best for what’s everybody.'”

As you may know, there were no murders ever, anywhere, before people started talking about legalizing gay marriage.

Another cause of those murders? Trans people using bathrooms.

“And now there’s grown men barging in on you ladies while you’re putting your Maybelline on,” he explained dejectedly, before explaining that you can tell he is a man by his beard that he has, and also swearing to the ladies that he would never, EVER walk in on them in the restroom. Which is fine! Because he's a man! As a man, he should not be using the women's restroom. However, a trans woman -- unlike Phil Robertson -- is not a man, so it works out well for everyone! Yay! Except for all the people who will be murdered in wars and on our streets because there are people who aren't having sex or going to the bathroom the way Phil Robertson would prefer, and also not believing in Jesus even though even the calendar says he is the son of God!