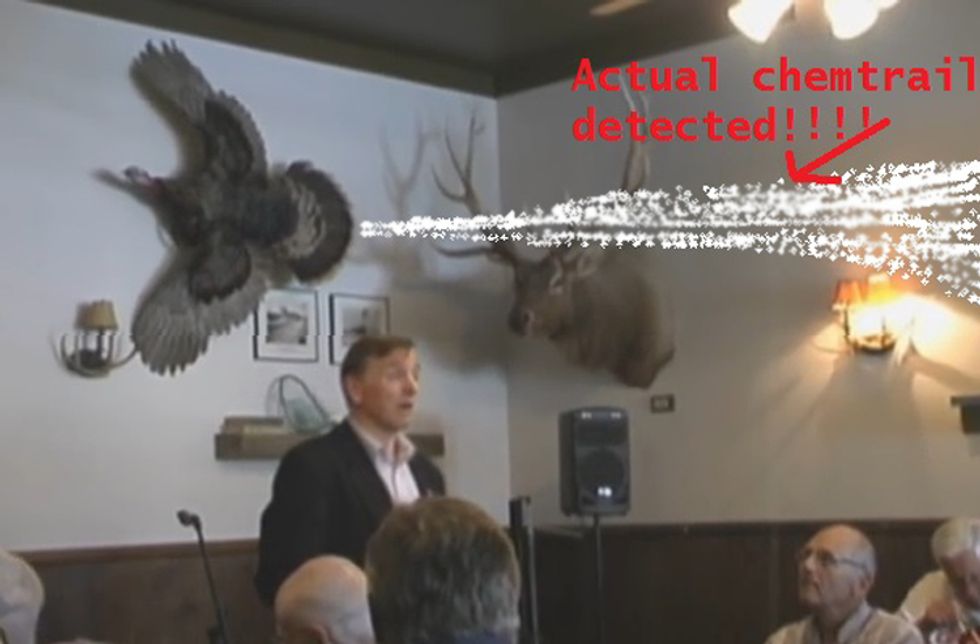 Here's how nutso the Chemtrail People are: they're actually too crazy for a Tea Partier, Arizona Republican congresscritter Paul Gosar, DDS, who got yelled at by an assortment of chemtrail enthusiasts at Monday's meeting of the Conservative Republican Club of Kingman. Kingman appears to be a hotbed of Chemtrail Trutherdom, as we've reported before. The wingnuts in the audience were not pleased by Gosar's complete denial of the international weather modification plot -- popularly known as chemtrails -- that is poisoning us from the skies!

Gosar fielded a question from a man identifying himself as Al DiCicco [correction: we used the name as written in the RawStory piece, but it's Al DiCicco all right], who just wanted Gosar to know that:

For the past several years we’ve been testing people’s blood, hair follicles, rainwater, and soil [...] I’ve been involved in opposing geo-engineering projects above Arizona as well as elsewhere. We have a serious situation here, where we have submitted information to the Arizona Department of Environmental Quality whose own mission statement is to protect our environment, including our air [...]

My body is filled with barium, aluminum, and strontium, and no one's doing anything about it. That’s why I’m here today. Because we want answers and we want something done instead of being placated and have people make fun of us about "tin-foil hats"? Well, go get your blood tested. You’ll throw your tin-foil hat away, as well as your jokes. This is a serious matter ... We all are aware that geo-engineering and solar radiation management is going on worldwide. My questions is: what are you going to do about it, and when?

After the enthusiastic applause died down, Gosar asked, “Okay, who are science guys here?”

Gosar, perhaps a bit surprised at the depth of Pacheco's honesty, replied "Really?" while another off-camera voice said, "Yes we do."

Gosar then explained that the whole science schmegegge works a whole lot better when you have data that can be replicated, but then, perhaps sensing that he might be losing votes by opening the door to fantastic impossibilities like evolution or climate change, quickly added that he doesn't trust the government either, but also cautioned that you won't win a lot of friends by blaming the United Nations for everything. And then he started spouting a lot of crazy talk about how uranium and barium are elements that are found in higher than normal concentrations in Arizona due to uranium deposits in the Grand Canyon that get kicked up into the air, as if anyone would believe something so nutty, when all you have to do is LOOK UP and see the jets spraying chemtrails every day!!!!!!! And so, right on cue, a woman in the audience called him out:

Chemtrail Lady: We’re talking about what is being dispensed by aircraft...

Gosar: Well, there is nothing there...

(Another voice, maybe the cameraman: Let her finish!)

Gosar: When we start talking to different universities and reputable aspects, [?] there's no replication they can find at all.

Chemtrail Lady: Because they're covert operations, so you're not going to get anyone. You have two eyes, you just need to look up and look up at the sky! [...]

Gosar: In some ways I have to start trusting the National Institute for Health...

Chemtrail Lady: We've been researching it and studying it for years and years...

Chemtrail Lady: Many of us, many citizens, we're up to millions, right now, globally, who have researched this. There is people all around the world testing their blood, the soil, snow*, rainwater. And aluminum, barium, and strontium is not just on the rise, it's off the charts! It's extremely concerning, it's coming from somewhere, it's global, and the only way that can happen is if it's airborne. We want it investigated!

*Or what the government tries to tell us is snow!

Gosar tried to mollify her with some stupid stuff about universities and atmospheric science and peer review, but everybody knows that they're all in on the scam. Also, we bet that the science departments at Arizona's three public universities will love him for his suggestion that the Mohave County Chemtrails Investigation Club gather their data and take it to the universities -- thanks one hell of a lot, Congressman.

This isn't the first run-in that Rep. Gosar (the Destroyer) has had with people farther out on the "we love America and hate the actual government" spectrum. A couple years back, he got into trouble with some other Super-Duper Patriot ladies for not loving the Constitution enough, and barely escaped alive.

Next time Gosar attends a town hall, he should come in the form of a large and moving Torg. Many Shuvs and Zuuls will know what it is to be roasted in the depths of the Slor that day, we can tell you!