Chevron To Pennsylvania Town: Sorry We Murdered You With Fracking, Here's A Coupon For Pizza 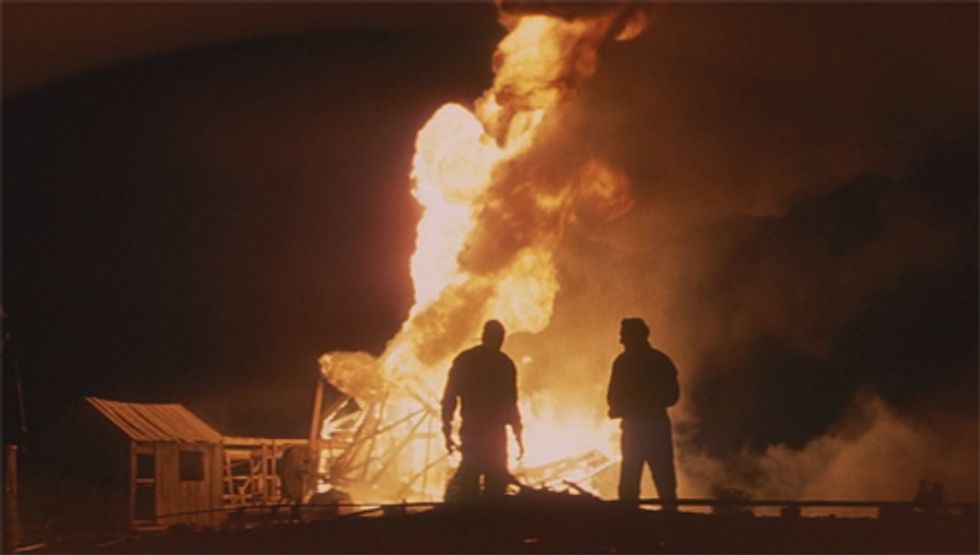 This post made possible by the Patty Dumpling Endowed Chair for Oil Spill Blogging.

Who says there's no corporate responsibility these days? When two natural gas wells in Dunkard Township -- or maybe it was Bobtown -- Pennsylvania, exploded last week and burned for five days, injuring one worker and leaving another missing and presumed dead, the good folks at Chevron were quick to offer the people of the town -- whichever town it is -- a little something to say "We're sorry for the explosion and fire in whichever town you live in": They're distributing letters of apology and a nice coupon for a free large pizza (and 2-liter bottle of soda) to about 100 households in the town of Bobtown, or maybe Dunkard Township.

You have to admit that it's a very nice gesture.

The letter delivered to residents reads,

We are sorry to have missed you. We wanted to provide you with a status update on the February 11 incident that occurred on Chevron’s Appalachia’s Lanoce 7 H well pads in Dunkard Township and see if you had any questions or concerns that we could address.

Chevron recognizes the effect this has had on the community. We value being a responsible member of this community and will continue to strive to achieve incident-free operations. We are committed to taking action to safeguard our neighbors, our employees, our contractors and the environment.

If you have any questions, please call our toll free community line at 1-877- [redacted because we aren't trolls -- Dok Z]

That's some outreach, that Chevron Community Outreach. In addition to the free pizzas, the residents of Bobtown or Dunkard Township also get to worry about strange odors and maybe their drinking water catching on fire, so it's kind of a gift that keeps on giving. As this Ken Layne guy at Gawker notes, Chevron left some other gifts for the community:

Both wells continue leaking natural gas into the air, and Chevron was given special permission to take a million gallons from nearby Dunkard Creek to pour over the noxious wells and sink back into the groundwater supply. Drinking water poisoned by the fracking industry is responsible for a wave of illness and disease in Southwest Pennsylvania, although the area's boom in natural gas fracking is just six years old—longer term exposure to many of the poisons produced by the wells, such as benzene, are known causes of cancer and birth defects.

Like many parts of Pennsylvania, the rural community of Bobtown is covered with fracking wells. The government of Pennsylvania is completely owned and operated by the natural gas industry, to the point where it's illegal for doctors in the state to let patients know that fracking is killing people.

We're starting to feel a little woozy ourselves, now that you mention it. And the effects are spreading -- already, fumes from the operation have confused writers at two different news sources as to the exact location of the wells and the town.

Follow Doktor Zoom on Twitter. By this time of day, he's not altogether sure where he's at, either.