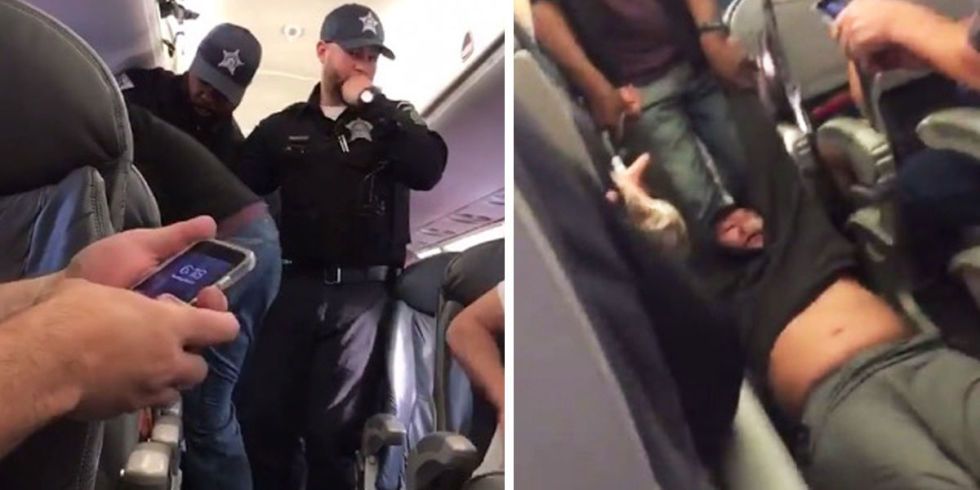 United Airlines has perhaps not had the best year so far, public relations-wise. Just two weeks ago they wouldn't let some little girls fly on a plane because their leggings were just too sexxxy. Then, the entire internet was grossed out on Monday following the release of video footage of aviation officers brutally hauling a 69-year-old doctor off of an overbooked United Airlines flight that he had paid good money to be on.

UPDATE: Although the Chicago PD for some reason put out a statement on this whole mishegas, the officers in question were actually from the Chicago Aviation Department, and not the CPD.

Chicago PD, of course, had a very different interpretation of events! At first, anyway.

At approximately 6:00 p.m., a 69-year-old male Asian airline passenger became irate after he was asked to disembark from a flight that was oversold. The passenger in question began yelling to voice his displeasure, at which point Aviation Police were summoned. Aviation Officers arrived on the scene attempted to carry the individual off the flight when he fell. His head subsequently struck an armrest causing injuries to his face. The man was taken to Lutheran General Hospital with non-life threatening injuries. Ongoing investigation.

OH. See! Totally not their fault! He only hit his head and got all bloody because he was being irate and fell and hit his head. And then, because he fell, he had to be gently carried off the plane by the delicate, angel-like hands of the Aviation Officers, who definitely had nothing at all to do with the fact that he hit his head in the first place. And then they were even nice enough to take him to the hospital! What? You say you saw some "video" in which you definitely saw some police officers aggressively manhandling a senior citizen for basically no reason and very much causing him to hit his head on the arm rest? Pssht. Who are you going to believe, the Chicago Police or your lying eyes?

Besides, it's not like they took him to a black site or anything. They didn't disappear him! They were just carrying him off the plane, gently, because he had already fallen and they were clearly concerned that he might fall and hurt himself again.

Later -- perhaps after actually bothering to watch the video -- they realized that maybe something did go wrong there, and put the officer involved in the incident on suspension.

The aviation department gave a statement to the Chicago Sun-Times:

“The incident on United flight 3411 was not in accordance with our standard operating procedure and the actions of the aviation security officer are obviously not condoned,” aviation department spokeswoman Karen Pride said. “That officer has been placed on leave effective today pending a thorough review of the situation.”

Perhaps there are still some lessons to be learned here, for everyone involved. Like, hey! Maybe United learned not to overbook a flight when you know for a fact that you need to get four of your workers on that flight, because probably other people have booked that flight because they need to get to the place they are going as well. Like for instance, if they are a doctor and have patients to see in the morning. Maybe the Chicago Police will even learn -- if we are lucky! -- that people have camera phones now and if they manhandle a 69-year-old man and haul him off a plane, some people will record that and everyone will think they are terrible human beings who should not, in fact, be doing that.