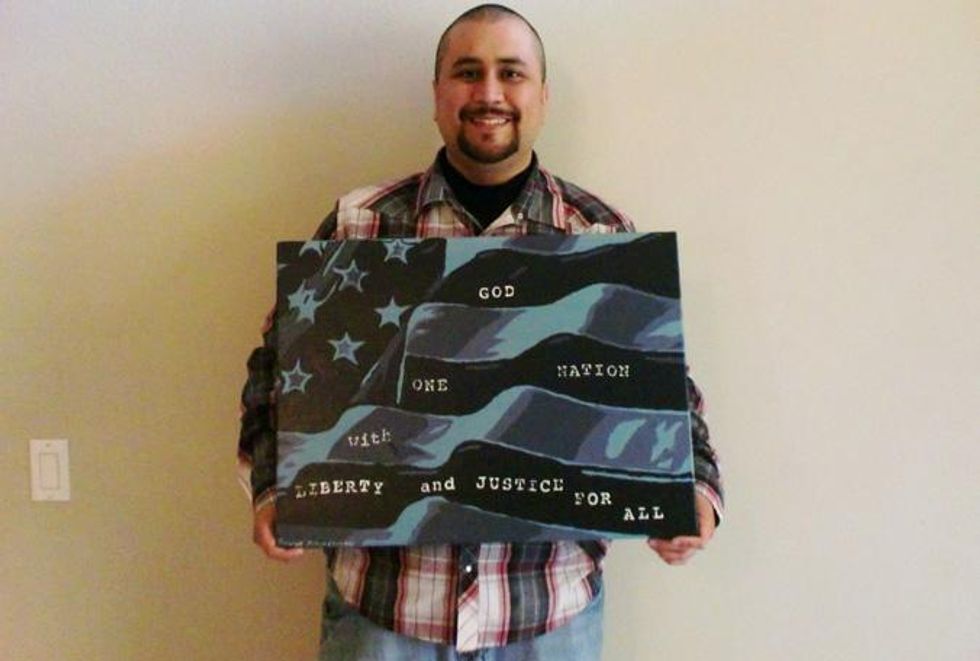 George Zimmerman misses us. He misses us so much, he is taking time off from getting arrested so many times for domestic violence to announce that he's auctioning off to the highest bigot the marvelous Freedom Stick he used to kill a child. And while he's making our heads go extra 'splodey, he is also reminding us he is a hero, and he will use the proceeds from said weapon to "fight BLM" (he means Black Lives Matter folks, not the people who watch over the birds and feed Cliven Bundy's emaciated Auschwitz cows) and stop Hillary Clinton from grabbing all the guns.

Let us read, from his keyboard to God's ears, the words of the one and only George Zimmerman. (They are very stupid words, but that doesn't mean they won't FUCKING ENRAGE YOU.)

Prospective bidders, I am honored and humbled to announce the sale of an American Firearm Icon. The firearm for sale is the firearm that was used to defend my life and end the brutal attack from Trayvon Martin on 2/26/2012. The gun is a Kel-Tec PF-9 9mm. It has recently been returned to me by the Department of Justice. The pistol currently has the case number written on it in silver permanent marker. Many have expressed interest in owning and displaying the firearm including The Smithsonian Museum in Washington D.C. This is a piece of American History. It has been featured in several publications and in current University text books. Offers to purchase the Firearm have been received; however, the offers were to use the gun in a fashion I did not feel comfortable with. The firearm is fully functional as the attempts by the Department of Justice on behalf of B. Hussein Obama to render the firearm inoperable were thwarted by my phenomenal Defense Attorney. I recognize the purchaser's ownership and right to do with the firearm as they wish. The purchaser is guaranteed validity and authenticity of the firearm. On this day, 5/11/2016 exactly one year after the shooting attempt to end my life by BLM sympathizer Matthew Apperson I am proud to announce that a portion of the proceeds will be used to: fight BLM violence against Law Enforcement officers, ensure the demise of Angela Correy's persecution career and Hillary Clinton's anti-firearm rhetoric. Now is your opportunity to own a piece of American History. Good Luck. Your friend, George M. Zimmerman ~Si Vis Pacem Para Bellum~

We looked up that last bit, and it means "If you want peace, prepare for war." We are just going to guess that that phrase is popular with Nazis. Also, that Matthew Apperson fella is someone with whom Zimmerman has had trouble quashing his beefs. (They were road rage beefs, because George Zimmerman loves to road rage almost as much as he loves shooting children.)

But let's back up to that Black Lives Matter killing everyone part, and their "violence against Law Enforcement officers." Would it surprise you to learn that it is in fact white men who are killing all the police this year? White men are killing so many cops -- cop deaths are up 57 percent over this time last year -- that they're actually outperforming their demographic! Seventy-one percent of cop killings this year were by white men, where whites make up only 63 percent of the population. Good job white dudes! Way to go out with a bang!

Anyway, George Zimmerman hates Black Lives Matter because they are very violent and might even kill someone if they are not careful, and the only person who should be killing everyone is George Zimmerman, because he loves murder. Buy his gun -- there's a $5000 reserve -- if you want to. Use it to make a nice lamp, maybe, and keep George Zimmerman from standing his ground on another child's dead body.