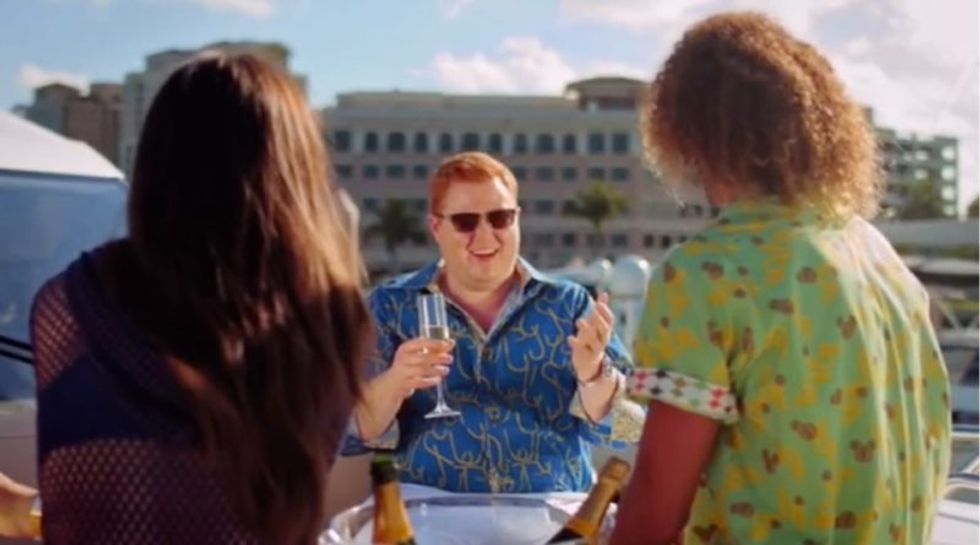 Wyatt Ingraham Koch encourages folks to 'Be Bold' just like his yacht shirts.

It's been a really busy week for Republicans, who finally birthed their horrifying monster tax cut bill for the rich, so you'll forgive them if they put off until 2018 funding the government, passing their band-aid of a bill to slightly limit the damage of undoing the individual healthcare mandate, and reauthorizing the Children's Health Insurance Program, won't you? They worked really hard to further enshrine plutocracy in the tax code, so the little people will just have to wait a little while longer, you see.

Details, details. Do 9 million children really need healthcare that much? They don't even VOTE.

Yes, they know CHIP expired in September and states are already running out of money and warning parents to start looking for other healthcare options for kids on CHIP -- Virginia, Alabama, and Texas are prepping such warnings just in time for Christmas, in fact. But surely you don't expect Republicans to work during the holidays like some kind of loser parent whose child depends on CHIP, do you?

Not to worry, though. Tennessee's Lamar Alexander and Maine's Susan Collins issued a joint press statement today explaining why they can't keep their promises just yet: It's all Democrats' fault.

Oh, look, and there's a big stinkin' lie in there: That Avalere Health study predicting that two ACA stabilization bills supported by Alexander and Collins would "reduce premiums by about 20 percent" was based on the assumption that the individual mandate would remain in place. The study was pretty goddamned specific about that point:

these stabilizing effects could be overshadowed by the consequences of repealing the Affordable Care Act’s individual mandate, which is included in the Senate’s version of the tax reform bill. Consequences include increased premiums and reduced enrollment in the exchanges, according to estimates made by the Congressional Budget Office.

As we've noted previously, the CBO warned the ACA bills Collins wanted in exchange for her vote on the tax cut will not offset the effect of killing the mandate. Even if she gets what she wanted (which is far from guaranteed), Collins won't have done a thing to protect people on the ACA exchanges.

And yeah, it's a bummer about the CHIP kids, too. If only those mean Democrats didn't keep preventing the party that has all the power from doing something about that, this would be a much merrier Christmas for everyone concerned:

So maybe by February. Even if a lot of states run out of CHIP money in January, there probably aren't too many kids who will suffer medical emergencies because of this delay. Those kids just need to get some little sterile bootstraps is what they need to do.

Maybe they could take a cue from happy Koch Industries heir Wyatt Ingraham Koch, shown here in a nice video from August that miraculously went viral today. The son of Bill Koch, Wyatt now stands to inherit more of his billions without any pesky estate tax, and will surely need children to work in the factories that make his fugly tacky line of shirts. Look at this superior specimen of plutocracy:

[Update: Wyatt has removed the video from his Instagram account, but we found you all a copy on the Twitters:]

BE BOLD, sick children! BE BOLD! The rich certainly aren't about to eat themselves.

Yr Wonkette is supported by reader contributions. Please click here to help us keep our own asses insured.