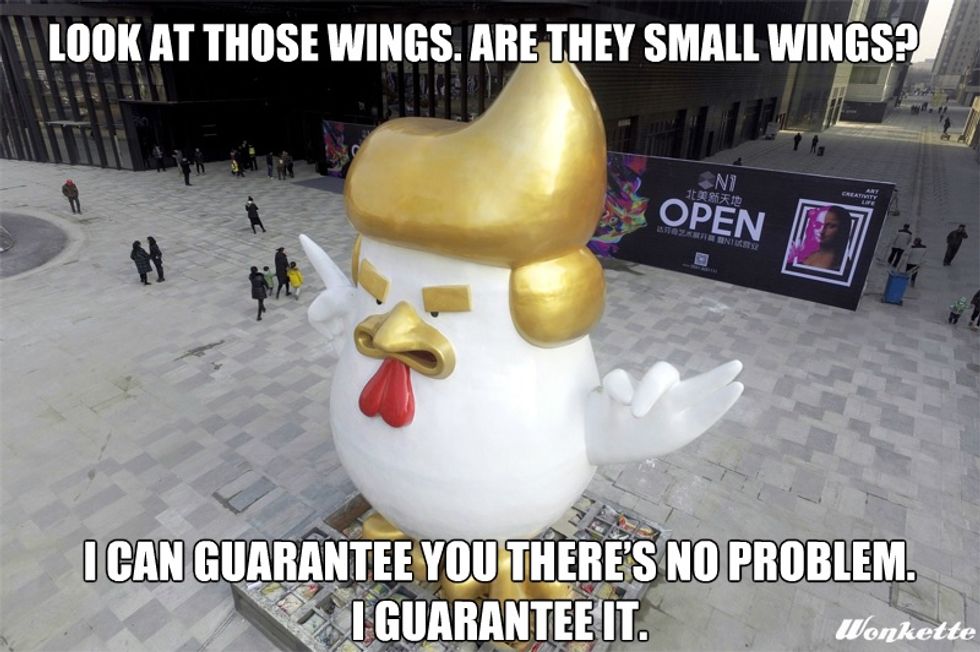 Donald Trump is going to have to take back all those nasty things he's said about China, as they've finally acknowledged he has a huge cock. Or is one, at least, in the form of a 23-foot statue outside a shopping mall in Taiyuan, a city in northern China. The feathery erection -- either a rooster-themed Trump, or a Trump-themed rooster -- was installed to celebrate the coming Year of the Rooster, which begins on Lunar New Year, January 28.

The New York Times reports that despite the dangerous game of chicken Trump has been playing -- trying to feather his nest with overtures to Taiwan and taking to Twitter to egg on the Chinese government -- "reaction to the rooster on Chinese social media was light and full of positive emoji."

Global Times, a state-run tabloid, said on Tuesday that onlookers in Taiyuan, the capital of Shanxi Province, had praised the statue as a “perfect blend of Chinese and Western cultures.”

“It’s not bad looking,” Zhang Guoqiang, an employee at the Yihui Japanese Restaurant at the North America N1 Art Shopping Center, where the statue is, said by telephone on Thursday.

Needless to say, inflatable "Trump chicken" replicas are selling like crazy on China's online shopping site Taobao. If you want one bigger than the original, there's a 32-foot version available for chicken feed -- just $1,725.

It turns out the designer of the mammoth fowl is actually an American, Casey Latiolais, a Seattle-based illustrator and animator who was contracted by the Chinese real estate developer Beijing Reliance Commercial Land back in November. Latiolas said the company hadn't said anything about wanting a Trump caricature, but had only specified it wanted a statue to mark the Year of the Rooster. Latiolais "declined to comment" on why he'd decided to Trump up the enormous cock, although he was happy to cluck contentedly about his achievement on Twitter.

Latiolais added in a follow-up Tweet he'd "had no idea the scale" of the final statue that resulted from his design; he also linked to sketches and early digital models on his page at Behance, sort of a LinkedIn for artists to display their portfolios. He told the Times he'd been pleasantly surprised that the statue was "sort of bipartisanly looked at as funny” by friends and even by his parents, who'd voted for Trump.

Ever the comprehensive source of relevant information, the Times also notes this isn't the first time Chinese pop culture has embraced an avian version of Donald Trump; in November, Chinese social media was all atwitter over a golden pheasant that lives in a zoo in Hangzhou:

No word on whether the pheasant is planning to pursue a defamation suit over the comparison.

While Donald Trump has a habit of flying into a rage on Twitter whenever someone ruffles his feathers, it appears he has so far not noticed China giving him the bird, and has instead been pecking at the Obama administration over its Israel policy and crowing about what a great job he's doing for the economy before actually entering the Ovoid Office.

Knowing Trump, he may not even consider the statue an unflattering caricature, and will probably try to secure the distribution rights for replicas to be made in China and sold here. If anyone complains, he'll say he's giving the proceeds to "charity."