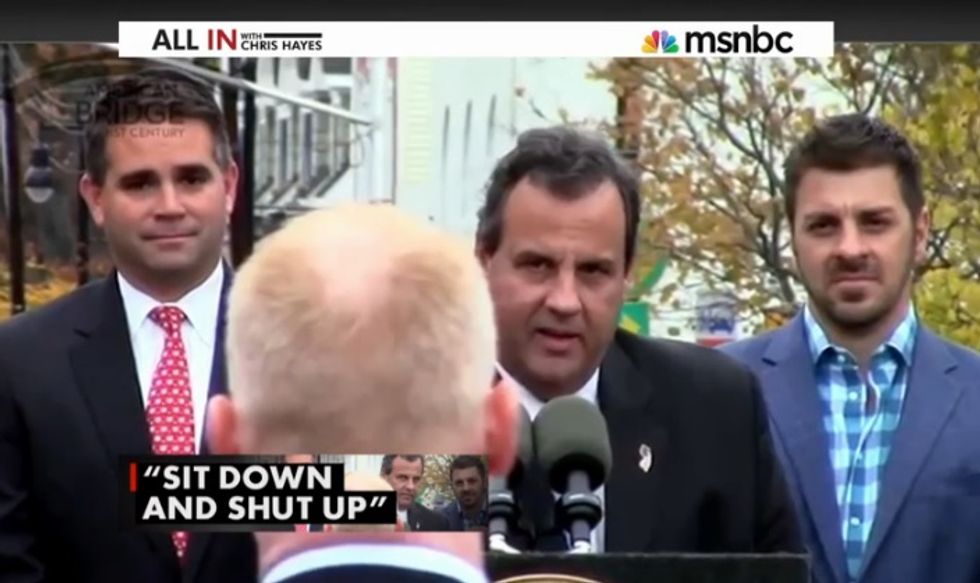 Ugly bag of mostly bile Chris Christie did some brave yelling at a guy during an appearance in Belmar, New Jersey, to mark the second anniversary of Hurricane Sandy on Wednesday. Where sometimes your Barry Bamz politely says he respects protesters' rights to free speech (usually before they get escorted out), Chris Christie knows that anyone challenging him is just plain wrong. So he yelled a few choice insults at one guy who dared to challenge him.

You all know me. So if we’re going to get into a debate here today, it’s going to get very interesting and very fun. … So I’ll be more than happy to have a debate with you any time you like, guy, ‘cause somebody like you doesn’t know a damn thing about what you’re talking about except to stand up and show off when the cameras are here. I’ve been here when the cameras aren’t here, buddy. I’ve done the work. I’ve been here when the cameras weren’t here and did the work. So I’m glad you had your day to show off, but we’re the ones who are actually here to do the work. So turn around, get your 15 minutes of fame, and then maybe take your jacket off, roll up your sleeves, and do something for the people of this state.

When the man in the crowd responded, Christie, in his typical professional and potentially presidential manner, yelled back:

So listen, you want to have a conversation later, I’m happy to have it, buddy. But until that time, sit down and shut up.

Sure, Christie's happy to debate this guy here, today, any time. Just not now because shut up. This is seen as Being Tough by many, and Christie obviously isn't wasting any time in trying out his potential 2016 slogan "it's time to start offending people."

MSNBC's Chris Hayes booked the guy, Jim Keady, on his show Wednesday, and it turns out that Jim Keady is not some random screamer; he's a New Jersey small businessman and leader of an advocacy group called Finish the Job. He is seriously torqued off at the glacial pace of assistance to people that Chris Christie promised to help two years ago, but who are still waiting for help from the state. Turns out that New Jersey is still sitting on 80 percent of the funds granted to the state by the feds. That's some $800 million in Sandy relief that should have been spent by now on housing repairs, raising homes in low-lying areas, and the like.

Hayes talked to Keady about the considerable problems that still haven't been addressed by Chris Christie, who nonetheless insists that Sandy victims are his top priority. After petty revenge, of course.

Just in case you hadn't remembered to loathe Chris Christie yet today, this clip will give you at least one more reason, maybe several: