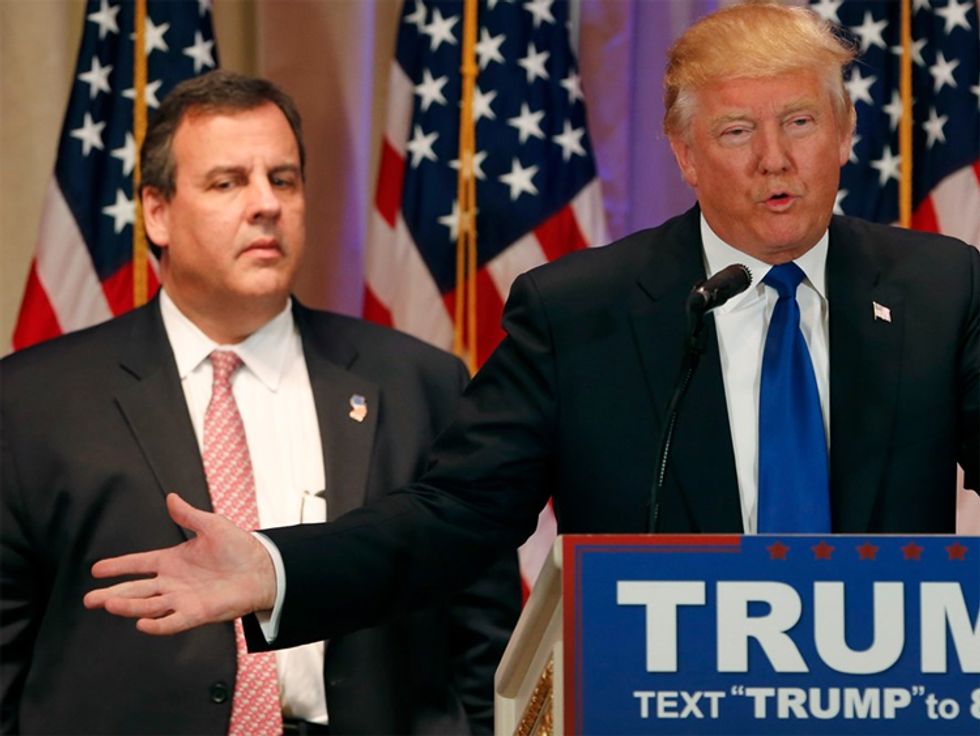 Big shake-up in the Trump transition team! Chris Christie has been sent home to pretend like he has even the least bit of interest in being governor of New Jersey (at least until he's maybe indicted), and Vice-President-Elect Mike Pence, the VeePEOTUS, will now be in charge of the transition team it's increasingly clear nobody in Trumpland thought was going to actually happen.

The president-elect told advisers he wanted to tap Mr. Pence’s Washington experience and contacts to help move the process along, according to people familiar with the discussions. An executive committee, which will include members of Congress, will advise Mr. Pence as the process moves forward.

Mr. Christie, along with Rudolph W. Giuliani, the former mayor of New York, and Michael T. Flynn, a retired lieutenant general who has been a top campaign supporter, will serve as vice chairs of the transition, the sources said.

We're still sick about the election. But even through our gloom, we can see glimpses of comedy GOLD, Jerry. GOLD! The transition office will be run by Sen. Jeff Sessions's chief of staff, and just look at the lineup of rightwing luminaries who'll be on the turd-sorting line, making sure only the purest wingnuts make it into Trump administration jobs:

Rebekah Mercer and her husband Robert Mercer are the top financial backers of the Trump campaign, as well as big-league funders of Breitbart.com. So, you know, moderating influences. Man, is Alex Jones ever going to feel left out -- at least until he gets a pass to the secret sewer-level entrance to Trump Tower.

There is a whole lot more "who is sucking whom off for a cabinet job" speculation in the New York Times as well, if you are into that kind of stuff. One name being tossed around as a possible Treasury Secretary nominee is JPMorgan Chase CEO Jamie Dimon; another is Steven Mnuchin, Trump's campaign finance chairman and an alum of Goldman Sachs. This news ought to be hugely satisfying to all the people who screamed that Hillary Clinton would have been far too snuggly with Wall Street types.

We'll confess we aren't thoroughly fascinated by all the fill-in-the-org-chart details, which may perhaps explain why we never got into Dungeons and Dragons, with all the character stats. At least in D&D you don't have to worry your Paladin lacks legitimacy after losing the popular vote.

Maybe now Christie will take some responsibility and... hahaha, sorry, we couldn't keep a straight face.

Meanwhile, the Times reports, Obama administration officials at the Pentagon and State Department are still waiting to hear from the Trump transition people, so they can get on with "beginning the complex work of transferring responsibilities and authority." Why the big hurry, guys? Trump always gets the best people, even if he has to kick them to the curb after their aides are convicted of felonies and implicate them in all that criming.

Donald Trump's Doctor Every Bit As Professional As Anyone Else In His Organization, God Help Us

Asked for comment on the transition process, the ghost of notoriously inept President Warren G. Harding said he hoped Trump would find good, trustworthy people. Especially a personal physician who knows the difference between food poisoning and a heart attack. Since Donald Trump will be the healthiest human being ever to serve as president, no worries there.