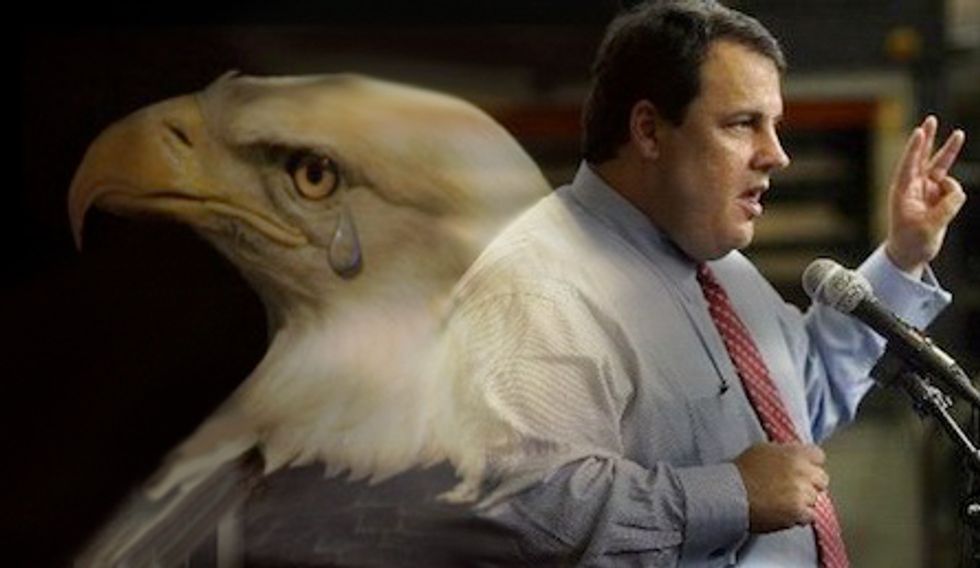 Human meatball Chris Christie, governor of the Turnpike Exit State, is gearing up for his inevitable presidential run in 2016. Which means giving America a glimpse of that fabulously warm personality type that once made Tony Soprano the most popular murdering sociopath in America.

In a speech to the U.S. Chamber of Commerce -- speaking of murderous sociopaths -- Christie suggested the next president must be a governor because our current experiment of electing a legislator has failed so spectacularly. (Whether anyone pointed out to him that our last president was a governor, and look how well that turned out, is unknown.) This line was a nice shot across the bow of certain Republican senators who might also be running for president -- cough cough Aqua Buddha and Edmonton Ted cough cough -- who will certainly not hang pictures of Christie shaking hands with President Obama after Hurricane Sandy around the governor’s neck like an amply sized noose.

Christie’s shtick for 2016 will be painting himself as the scrappy street fighter enthusiastically taking on all the horrors that threaten America -- teachers unions, Obamacare, people who think Jon Bon Jovi is the greatest Jersey musician -- and telling everyone the score, the inside story, and the straight dope without caring who he pisses off. He told the crowd of businessmen and well-heeled donors he doesn’t care if he’s loved “but I want to be respected.”

In the back office of an auto shop off Exit 37, a bunch of Jersey stereotypes in undershirts and gold chains started yelling, “Fuckin’ tell 'em Christie, you gabbagootz! You fuckin’ stoolieyanz! This fuckin’ guy, we fuckin’ love you, you big beautiful fligache! Fuckin’ respect, you fucks!”

Christie also took a possible 2016 campaign slogan out for a spin, telling his audience that in the course of fighting hard to take back the White House from the moulinyan currently occupying it, “it’s time to start offending people.” Edgy! And it will easily fit on a bumper sticker. But if it doesn’t test well with the focus groups, here are some other possible slogans for Christie to try out, courtesy of yr Wonkette. You can thank us later, Governor.

God we’re going to have fun in 2016, assuming we don’t stick our heads in an oven while disemboweling ourselves with a rusty shrimp fork. Could go either way.