Chris Matthews Can't Stop Staring At Melania Trump, Will Be In His Bunk 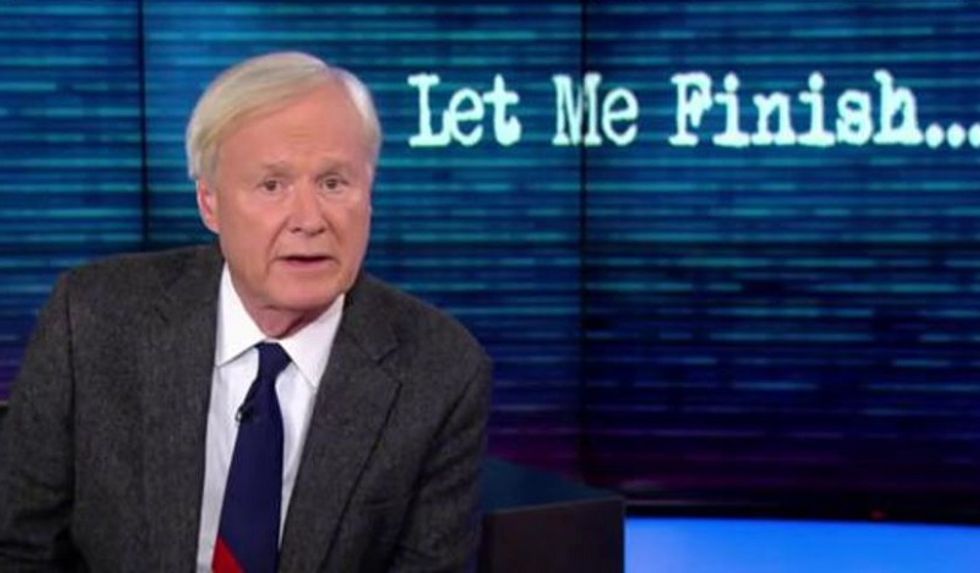 I'll just be a minute here. Be right back.

You'd think maybe Chris Matthews has been in the teevee journamalism business long enough to know he should assume every microphone is live, but he forgot that little axiom Tuesday night during MSNBC's election coverage, treating viewers to his thoughts about Melania Trump's sexxy, sexxy looks. Variety has transcribed the moment, for the ages:

“Did you see her walk? Runway walk. My God is that good,” Matthews said.

It appeared that the 70-year-old “Hardball” host wasn’t aware his comments were being broadcast. “I could watch that runway show,” he added.

Brian Williams, who was co-anchoring the coverage of Trump’s victory, quickly cut to a commercial break. MNSBC declined to comment to Variety about the incident.

To his credit, Matthews at least refrained from adding, "She's got legs, she knows how to use them." Now that we've Zaprudered the video a couple of times, we're pretty sure that was a scheduled break anyway, rather than Brian Williams trying to cover up Matthews being an ass about Trump's ass, but who knows? Here's hoping Rachel Maddow at least gave him a really cold glare and maybe a quick lecture on objectification during the commercial break.

Then of course there was the inevitable heavy-sigh statement from Melania Trump's spokesperson:

Melania Trump is an accomplished businesswoman and entrepreneur in her own right, achieving tremendous success in a variety of industries, including an illustrious modeling career, as well as being a dedicated wife and mother. It is unfortunate to see the continuous inaccuracies and misrepresentations made by the media of Mrs. Trump as anything less than the independently successful woman that she is.

Huh. OK, fine, rip Chris Matthews for being a sexist doodyhead, but "continuous inaccuracies and misrepresentations made by the media" and "independently" successful seem a stretch. Next Melania's people will be telling us Donald married her because he admired her business acumen.

Variety also catalogued some of Matthews's greatest moments in Gender Awareness, like his insistence that Hillary Clinton talks too loud, that she only has a political career "because her husband messed around," and that she looked like Nurse Ratched from One Flew Over the Cuckoo’s Nest. Also the time he said she looked "witchy" when criticizing George Bush. Also also the time he said Bill had to "keep her on a short leash." And also also also his thoughtful 2006 rhetorical analysis of ladies like Nancy Pelosi or Hillary Clinton having positions of power, and are they really able to communicate the way they oughta?

“I was thinking how hard it is for a woman to take on a job that’s always been held by men,” Matthews said. “And it is so hard. We were watching Hillary Clinton earlier tonight. She was giving a campaign barn burner speech, which is harder to give for a woman. It can grate on some men when they listen to it, fingernails on a blackboard, perhaps. Now, here’s Nancy Pelosi, who has to do the good fight against the president over issues like minimum wage and at reforming, perhaps, prescription drugs, so that people can afford drugs and get them in a program that’s easier to understand. All kinds of things like she’ll have to go head to head with this president. How does she do it without screaming? How does she do it without becoming grating?”

Then there was the time in 2011 when he offered these insights into Sarah Palin's political assets:

“By the way, there’s something about her. It’s primordial," Matthews said. “When she walks and moves, there’s something electric about it. That she doesn’t do on television with Roger Ailes sitting in that booth in Wasilla. Look at, there‘s something. Other candidates don’t do this. She’s constantly in motion. She looks, obviously, very attractive. She’s doing something that works. If Mitt Romney was doing the same exact thing.This is what's going on here.”

Huh. And we always thought it was the fact that she was an expert at playing to rightwing resentments. Congratulations, Chris Matthews, for making us defend Sarah Goddamned Palin and Melania Trump from your being a sexist asshole. Yeesh.