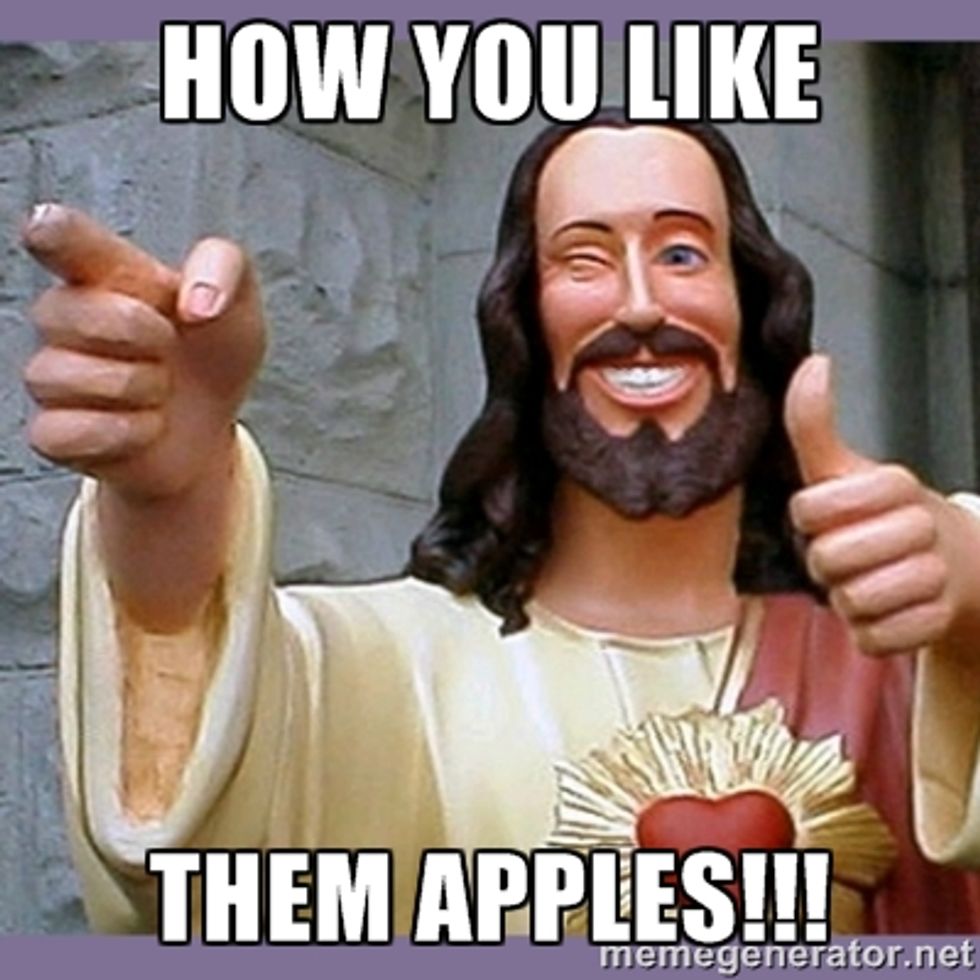 The evangelical Christians are fighting over the gays, everyone! Specifically, they are fighting at ultra-conservative Wheaton College in Illinois, where a simple nice chapel time turned into a fruit-tossing contest. NO THEY DID NOT THROW GAY PEOPLE AT EACH OTHER, you should not be calling gays "fruits," anyway, you dicks, did you learn nothing at liberal indoctrination camp?

Here is what happened. They were having chapel or whatever, and the president of the school was there, and this one straight kid was like "hey, college president, you know, have you ever considered that we're really horrible dicks about gay people?" and a whiny wingnut baby student in the room immediately hurled an apple at the kid, and now he is dead, the end.

We are just joshing, the kid is not dead, the whiny wingnut can't throw an apple very good and he missed, because he is Dumb and Bad At Sports, too busy trying to find the word "faggot" in the Bible to even learn to throw a ball, DORK:

After a student at a prominent evangelical college questioned his school’s stance against homosexuality in an all-school forum on Monday, another student allegedly threw an apple at him “as a warning against insulting the Spirit of grace.”

I APPLE YOU for being mean to the Spirit of Grace! This is an age-old Christian tradition, in case you aren't saved and don't know stuff like that.

Anyway, Wheaton is, again, wingnut, so they are extremely hostile to LGBT people and obviously believe that marriage is between one strapping buck and one of the Duggar girls, whichever is next in line (mom, Jessa skipped!). But at this chapel time event, a straight, opposite-married student stood up and dared to suggest, in eloquent religious language, that they should not be such homophobic dicks maybe, by posting this just askin' question on his FaceSpace page:

“All students, via the Community Covenant, and all faculty, via the Statement of Faith, are required to affirm a sexual ethic that denies everyone except celibates and married straight people a place in the kingdom of God. This sexual ethic is not at all universal and depends on a reading of scripture that is incredibly narrow and ignores history, culture, and science. The Statement of Faith and the Community Covenant also lack any language about the sacraments of the Christian church. Why is it the case that our college, in documents we all must agree to or be expelled, insists on formally condemning and denying equality to our gay and lesbian brothers and sisters, on spurious theological grounds, yet completely leaves behind baptism and Eucharist, which Jesus Christ himself instituted to grow and strengthen the Christian community?”

As he returned to his seat, the college tells TIME, another student sitting nearby threw the apple at him, and missed.

LOSER. So Phillip made a quite intelligent remark, and some weenus in the audience knew Lucifer was testing him right then, just like he did with that bitch Eve, so he grabbed an apple, probably out of the hand of a dumb girl who was about to eat the forbidden fruit AGAIN, and threw it at the homo-lover's head. Totally normal.

So then it was all over and the group held hands and sang "Lord I Lift Your Name On High" a few times and everybody was in bed by lights out, right? NO, because the whiny ass titty baby, whose name is Roland Hesse, of the Bad Throwing Arm Hesses, decided to nail a note to the school bulletin board, like some pipsqueak Martin Luther wannabe, titled "Dear Enemy," wherein he said "yeah, bro, made that shitty throw FOR JESUS, would do it again, rebuke rebuke rebuke (pew pew pew)!" Oh, and also he says he is NOT a pussy and could totally have landed the apple on its target, if he was doing it to be hateful. Apparently, he's only accurate when he's mad. He did THIS apple-throw out of Christian love, and Christian religious tradition clearly dictates that you're supposed to throw real shitty, probably underhand, when you're tossing the Lord's apples:

Wheaton, by the way, is one of those gross institutions what had a tantrum after Obamacare was passed, because they were so scared they'd have to buy somebody's slut pills, and even though they were allowed to fill out a form that said "hey we will not buy the slut pills out of our allowance money, but if that is a thing they can get with their own allowance from the insurance company, that's fine," that wasn't good enough, so they stomped their feet until SCOTUS granted them an injunction against it, a pox on ALL their houses.

So Wheaton sounds like a nice fun place all around! Sorry to all of you students whose parents made you go there, we know most kids of wingnut parents don't really choose these things for themselves, when it comes down to it. Maybe you can go somewhere nice for grad school, assuming a real university accepts your credits from Jesus School.