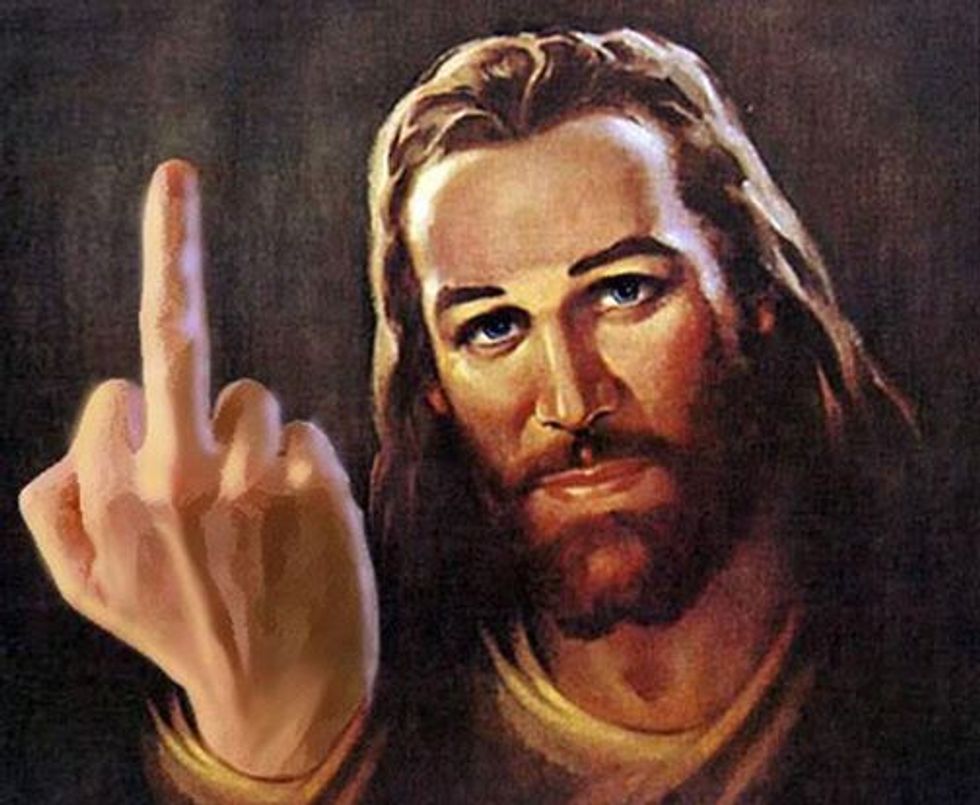 [contextly_sidebar id="feV8gKI3CSzCCIUF5U6k24s1NSoDFVWJ"]Time for an Official Wonkette update on a story we brought you weeks back, about a political science professor from Illinois's Wheaton College, Larycia Hawkins, and her nasty proclivity for acting like Muslims are not only human beings, but also people who worship the same god as Christians. (Don't know where she got that, except for maybe THE HISTORY OF THE TWO RELIGIONS.)

The school initiated firing proceedings against the tenured professor, specifically for the crime of saying on Facebook that she was going to wear a hijab during the Christmas season, "in religious solidarity" with Muslims. This did not go over well with Wheaton, because it is an wingnut evangelical clown college full of wingnut evangelical clowns. But good news! They won't have to do any stinky firing, because an agreement has been reached, whereby Hawkins will go away all by herself:

Wheaton Provost Stanton Jones told professors in an email Saturday night that he had turned over the decision of whether to vacate the administrative leave of their colleague, Larycia Hawkins, to college President Philip Ryken. But two hours later, faculty received another email from Ryken, informing them that Hawkins would not return to teach.

"The administration and Dr. Hawkins have come to a place of resolution and reconciliation," Ryken wrote. "With a mutual desire for God's blessing, we have decided to part ways."

Oh that sounds like some Jesus-grade bullshit. They are just resolving and reconciling and asking for God's blessing, over how the school blew a gasket when somebody acted Christlike toward the gross Muslims. Provost Jones, for his part, says he's super sorry:

In his email to colleagues Saturday night, Jones said he stood by his concerns about Hawkins' theological statements but added that he apologized for appearing to question the sincerity of her Christian faith and acknowledged that he had failed to see her theological response "was a promising start toward answering satisfactorily some of the questions that I was raising at the time."

According to the college, the biggest part of Hawkins's Muslim-loving sin was that she didn't SPECIFICALLY explain that, though Muslims may be fellow people of the Book, they are dirty hellbound heathens who are nowhere near as good as Christians. And in point of fact, Hawkins was trying to explain her theological point of view, just when the firing process started.

To the school's credit, a faculty council actually tried to put the brakes on the whole thing, and now some of Hawkins's colleagues are very uncomfortable with how this all went down:

Shortly after Faculty Council called for Hawkins' reinstatement, Gary Burge, a professor of New Testament, said he looked forward to what he called "a restoration and reconciliation service" at Edman Chapel to celebrate Hawkins' return and repent for the way she had been mistreated. The service Tuesday only fulfills half of that aspiration.

"This decision by the provost is a tribute to his integrity and courage," Burge said. "But many of us are wondering why the president's reconciliation with Dr. Hawkins did not include her remaining on our faculty."

Because she was nice to Muslims, and that is incompatible with why Jesus Christ died on the cross for white evangelical Christians' sins. DUH!

Is this all a bit confusing? Why yes, it is! It sounds like there were some backroom dealings the rest of the faculty, and we, the gentle viewing public, were not supposed to be privy to. Regardless, with Hawkins officially gone from Wheaton, we repeat our earlier clarion call to real, non-sucky colleges that a really great teacher is officially on the market. HIRE HER.