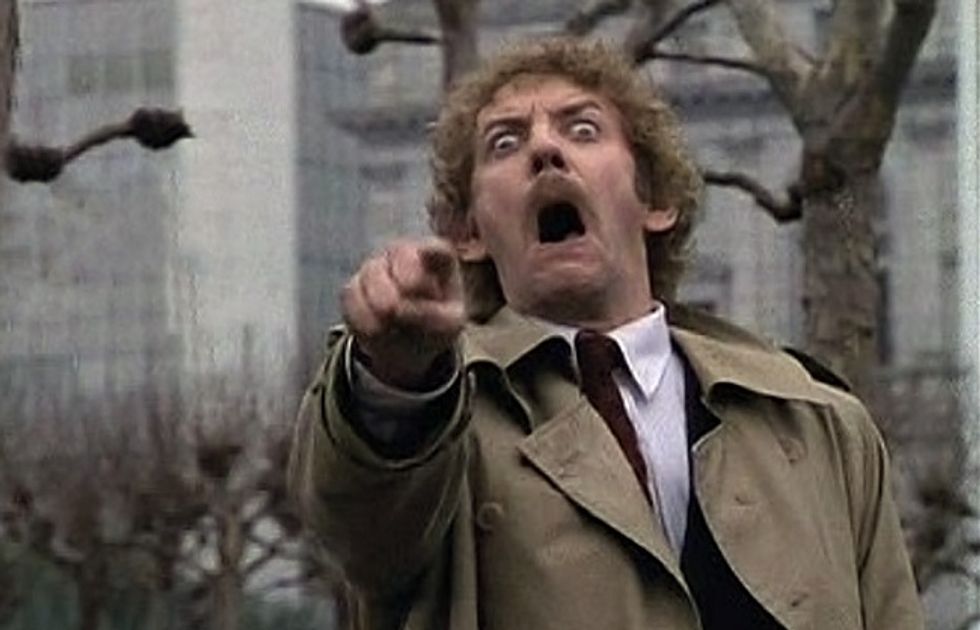 Semiretired (he just doesn't know it yet) rightwing blogger Erick Erickson has found a new cause, now that Never-Trumping hasn't worked out for him so well. You could even call it a crusade, and he would probably be fine with it. Erickson just wants to warn all Christians that Donald Trump is allowing an actual factual HERETIC to say a prayer at his inauguration, and this should outrage all real Christians who believe in the Trinity. Frankly, Erickson seems astonished that more people aren't more upset that Paula White, a "prosperity Gospel" scam artist Trump simply lurves, will be allowed to stand in front of American Jesus's Capitol and say a prayer to the wrong kind of Jesus. His biggest problem with White isn't that she's a swindler (though he's no fan of the "prosperity Gospel" folks), but her serious theological error. Here's video proof of her rejecting Jebus!

And here's Erick, son of Erick, waxing wroth about it (which is one of the few things Christians can wax without offending the Almighty):

Paula White is a trinity denying heretic. She rejects the Council of Nicaea’s creed that every Christian accepts. To reject the orthodoxy of the Nicene Creed is to reject Christianity itself [...]

Why does it matter? I don’t think anyone thinks Trump takes his faith serious (if at all), but Paula White claims to do so and claims to be a Christian. The President of the United States putting a heretic on stage who claims to believe in Jesus, but does not really believe in Jesus, risks leading others astray. Christians have an obligation to speak in defense of their faith. Trump letting this heretic pray in Jesus’s name should offend every Bible believing Christian.

Erickson even gives us a thumbnail history of the Council of Nicea (325 CE), convened by the Roman emperor Constantine to settle the burning question of whether Jesus was the only begotten son of God, or whether he was merely "the first fruit of creation." The belief that Christ was a Son of God, but not the only Son Of God, is known as the Arian Heresy, after some heretic named Arius who believed that Jesus was "made of a similar substance, but was not God," as Erickson explains. Among those who conclusively put that bit of heresy to rest was St. Nicholas of Myra, whom of course we now call Santa Claus. Yes, the very same warrior-ninja-saint whose fight against the Arian Heresy was so effectively dramatized in Kirk Cameron's Saving Christmas!

That council produced the Nicene Creed, which includes the profession that a Christian believes "in one Lord Jesus Christ, the only-begotten Son of God, / Begotten of his Father before all worlds," which is central to Christian orthodoxy. Erickson gets quite het up about this:

So it should be a pretty damn big deal that Donald Trump is inviting to pray at the inaugural an actual, factual heretic who rejects the Nicene Creed.

Thing is, Erickson's right, as any theology student would agree: the Trinity, and the Nicene Creed, are indeed integral to all Christian denominations. Of course, he's also overlooking the unfortunate reality that wide swaths of Christians fall short on doctrine, and some even believe you can make it to Heaven just by being nice to people, which is one of those sure paths to damnation that Chick Tracts warned about all the time. If you get right down to it, a whole lot of Christians are doing heresy all the time -- just ask any other group of Christians. Believing the wrong details about your invisible friend will get you sent straight to hell.

Still, Erick Erickson is pretty darn angry that Donald Trump would allow an actual heretic to take the stage at his Inauguration, to mislead the easily duped (which of course is Trump's political business model in the first place):

I’d rather a Hindu pray on Inauguration Day and not risk the souls of men, than one whose heresy lures in souls with promises of comfort only to damn them in eternity. At least no one would mistake a Hindu, a Buddhist, or an atheist with being a representative of Christ’s kingdom.

Oddly, Erickson gives a pass to Jews, who not only reject the Trinity, but reject the divinity of Jesus altogether, but like any good Evangelical, he knows Jews are really just potential Christians who haven't quite figured out who the Messiah was, so they get into the Judeo-Christian America club. Some Jews don't think that's the greatest idea ever, for some reason.

Happily, Erickson finds a way to blame this sad decline in doctrinal purity on Barack Obama:

Barack Obama was the first President to mention atheists in his inaugural address and Donald Trump will now go a step beyond that. He is inviting an actual trinity-denying heretic to pray at his inauguration.

Erickson at least falls well short of calling for Paula White to be stoned to death, which is very New Testament of him; he'd probably be satisfied with her being uninvited from the inaugural prayer-fest. For our part, we'd be satisfied with a vigorous audit of how much she's bilked from her followers.