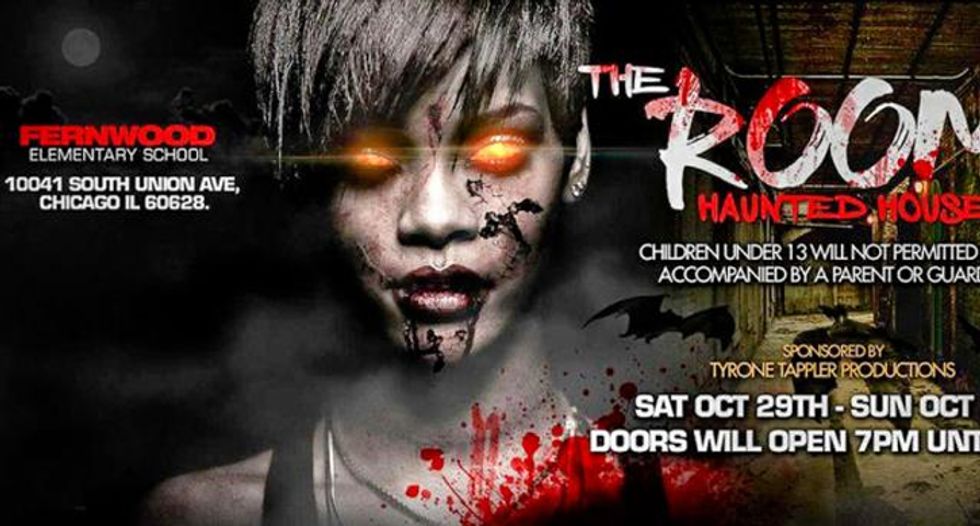 They named it after a scary movie and everything

Some meanies at Chicago Public Schools canceled an agreement to let a Christian group hold a haunted house in a local elementary school, simply because the group planned to re-create the Pulse nightclub mass shooting as a warning to young folks not to get shot to death in a mass killing without first being Saved. The district backed out of an agreement with Tyrone Tappler Productions to stage the haunted house after seeing a now-removed online ad for the "Christian interactive experience," seeking actors to volunteer as victims of the Pulse shootings: "Club Pulse, Dancers, Victims … CAGED PEOPLE/SCREAMERS, Extras needed trying to escape a cage! … SOUNDS INTERESTING? COME OUT THIS SATURDAY!!!"

Can't imagine why anyone would have a problem with that, considering that other parts of the "Hell House"-style attraction -- an exercise in bringing a Chick Tract to life -- would depict a botched abortion (presumably sending the woman and the doctor to Hell) and another re-creation of a mass shooting, the 2015 massacre at Emanuel AME Church in Charleston, where we presume all the victims went straight to heaven, so that would be the happiest massacre of all. A description of the show on the now-memory-holed ticket order page said "The Room" is

a real life haunted house. Guests will experience IN YOUR FACE scenes of dark reality. … You will walk in 10 Rooms and encounter individuals who will make choices. The choice is life or death; sin or salvation; heaven or hell. The scenes will be action-packed, real and jaw dropping.

So we guess the heaven-or-hell "choice" for the Pulse massacre scenario involved avoiding being gay, Pueurto Rican, or dancing in nightclubs like some sort of heathen. In any case, the Chicago school district had to go and spoil all the fun, so kids will never find Jesus now.

Mr. Tappler's website (warning: annoying music you can't turn off!) explains he is something of an artistic genius at stage productions that save souls, including this promo for a Christian mini-series on YouTube, which we were able to stomach about two minutes of:

He seems awfully earnest, we'll give him that. Last Friday, the Chicago Public Schools announced the cancellation of the production, which had been scheduled to take place at Fernwood Elementary (really!), saying,

The event organizers mischaracterized the true content of the event, and we did not approve any association with the activities the organizers have now advertised [...] The event will not be held on CPS property.

Still, if you want a good fright, you could probably simply follow election coverage. Have you seen that Kurt Eichenwald piece on Donald Trump's habit of destroying evidence in lawsuits? It's scarier than Dr. Tongue's 3-D House of Beef.

Donald Trump has not yet commented on the cancellation, although we expect he'll Tweet that if Chicago kids want to see people shot to death, they can just walk down the street any day, so their parents should vote twice for him. What the hell have they got to lose?