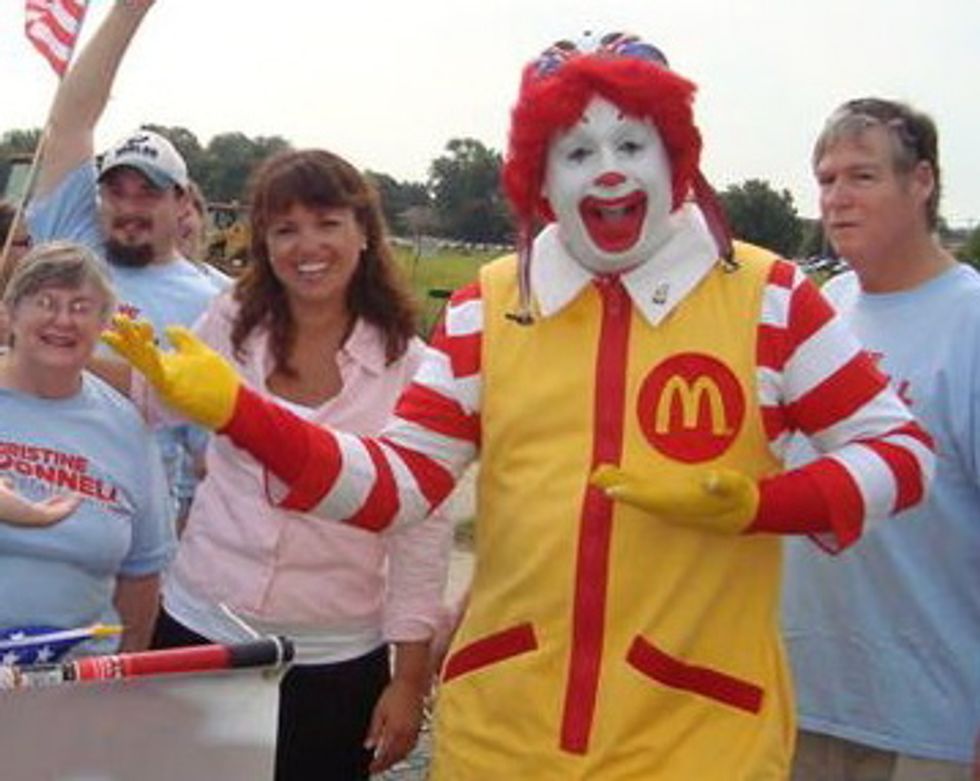 Staying true to her background as a character from a 1990s teevee show, Christine O'Donnell was in her state todaytalking about teaching creationism in schools, because she wants children to have the math and science skills to get jobs in that emerging Jesus Science industry. Chris Coons was here too, doing the old "exasperated bald-guy foil" routine. Suddenly, Coons said something about creationism not belonging in public schools, and O'Donnell asked him, "Where in the Constitution is the separation of church and state?" This was not the debate's quiz-show round; O'Donnell actually had no idea such a thing was in the Constitution. Isn't that one of the manuals you have to read before you can apply for this job?

Her comments, in a debate aired on radio station WDEL, generated a buzz in the audience.

"You actually audibly heard the crowd gasp," Widener University political scientist Wesley Leckrone said after the debate, adding that it raised questions about O'Donnell's grasp of the Constitution.

Did it really "raise" any questions, sir? Perhaps those questions had already been raised and answered, no? We are in what is referred to as the "pile-on period."

This is what O'Donnell gets for showing up to "a debate before an audience of legal scholars and law students." Someone in that building was likely to have actually read the First Amendment, unlike at her usual events, where the only parts of the Constitution people know are the Tenth and Seventeenth Amendments. Those people recite them every night before they go to bed, by the way.

And then there's this. Remember this?

Christine O'Donnell (R-DE) believes her participation in an eight-day conservative think tank fellowship is the "number one" thing qualifying her for service in the U.S. Senate. O'Donnell says the "deep analysis of the constitution" taught at Claremont Institute's competitive Lincoln Fellowship program would help her make sound decisions in the Senate