Chuck C. Johnson, Julian Assange, And Dana Rohrabacher Walk Into A Bar, Because WHAT EVEN THE FUCK? 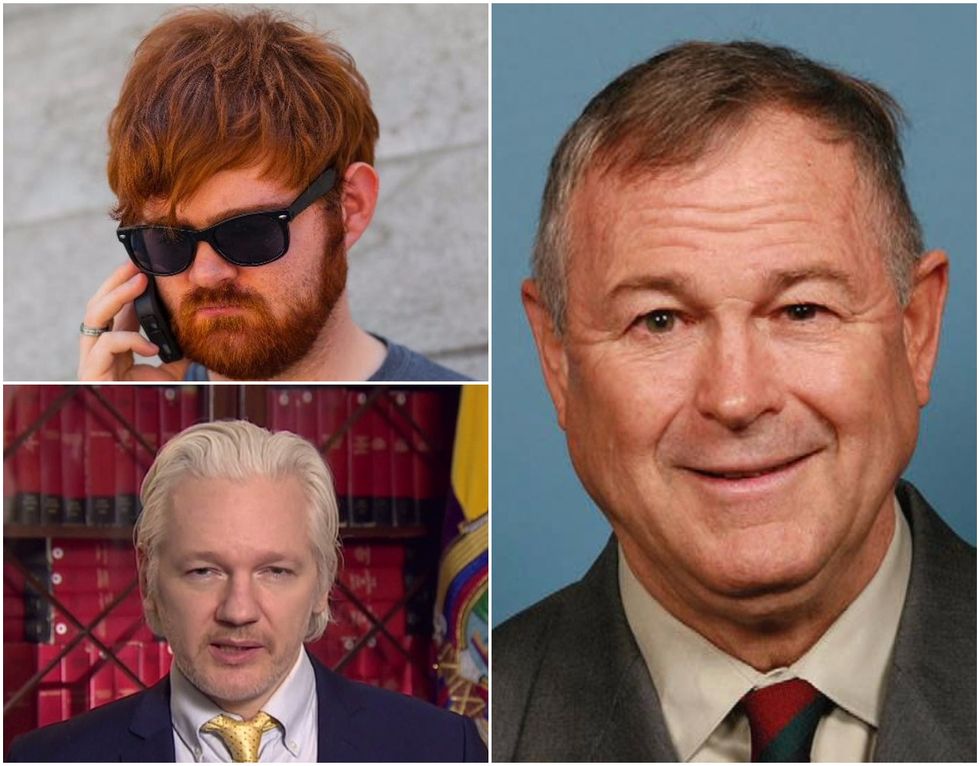 It's like the Brady Bunch, except all of them are AWARD-WINNING.

Time to check in with Dana Rohrabacher, the elected Republican from Orange County, California, who mostly represents the Kremlin's interests in Congress (since moving on from being literal actual BFFs with, and we are not kidding here, THE TALIBAN). He's been traveling again, but this time he didn't go to Moscow to get marching orders. Instead, he was in London, palling around with one of Moscow's most finely aged tools, Julian Assange, who is still hiding inside the Ecuadorian embassy like a pussy. If you're wondering why THE FUCK Rohrabacher is meeting with Assange, you are asking the correct question. If you're also wondering why THE FUCKITY FUCK the internet's greatest loser troll, Chuck C. Johnson, also attended the meeting ... just holy shit. Because this is a thing that happened.

Charles Johnson, a conservative journalist, told TheDC that he arranged the meeting for Assange because the WikiLeaks chief wants to strike a deal with the U.S. so he can stop living in asylum.

Johnson is not a "journalist," just like Julian Assange is not a "good person," so let's not be cute. Just kidding, he is an AWARD-WINNING JOURNALIST, which he will tell you all the time, like if you were so desperate for human interaction that you talked to Chuck C. Johnson.

ANYWAY. According to Johnson (whom you'd also know was an award-winning journalist if you googled him, you prick), the deal is that Rohrabacher, doing Moscow's bidding we guess, will go visit Comrade Trump in the White House, to try to make an Art Of The Deal to let Julian Assange become a free man. And it's no big deal, because Julian Assange has committed NO CRIMES (certainly nothing rapey in Sweden, and DEFINITELY not working with the Russians to tinker with the 2016 election in favor of one Donald John Trump). Indeed, Assange assured Rohrabacher of that:

After TheDC broke the news of the meeting, Rohrabacher put out a statement in which he said Assange “emphatically stated that the Russians were not involved in the hacking or disclosure of those emails.”

We're convinced! (Dana Rohrabacher is convinced, because on top of being Moscow's errand boy, he is also very stupid.)

Of course, it's possible that Assange has no idea he's been working for the Russians this whole time. Russia is big on co-opting useful idiots like that.

Here's the statement from Rohrabacher's office, confirming the meeting:

We notice a couple things here right off the bat. First of all, it's creepy and weird that Rohrabacher "plans to divulge more of what he found directly to President Trump," as if Julian Assange should have a right to be passing fake news love notes to the American president. Also, we're worried Trump will believe whatever Rohrabacher says Assange told him, because he too is a very stupid and gullible man.

Hey, maybe Assange's message contains flat-out conspiracy lies about how Hillary Clinton colluded with Ukraine to steal the election from herself! Because that's the counter-narrative America's enemies in Moscow and inside the White House want people to believe.

We're also amused by the editorial paragraph in the congressman's official statement, where it states as fact that the WikiLeaks emails revealed that the 2016 Democratic primary was #RIGGED against Bernie Sanders. Way to get that Russian dezinformatsiya in there, Congressman! We bet Putin is IMPRESSED.

OK, so Rohrabacher is trying to free Assange from his shackles, he's passing Assange's bullshit candygrams on to Trump, and AWARD-WINNING JOURNALIST Chuck C. Johnson set it all up. Anything else we should know? Oh just this thing Rohrabacher told The Hill:

“Julian passionately argued the case that WikiLeaks was vital to informing the public about controversial though necessary issues. He hoped that WikiLeaks — an award-winning journalistic operation — might be granted a seat in the White House press corps. As a former newsman myself I can't see a reason why they shouldn't be granted news status for official press conferences,” he said.

Holy CHRIST. Look, we know the Trump White House will let any AWARD-WINNING loser troll into its press room, and that the Trump White House is a big fan of all kinds of apeshit AWARD-WINNING fake news reported by dudes who raise money for ACTUAL NAZIS, but even in Trump's America of 2017, some things should still be considered beyond the pale, and JULIAN FUCKING ASSANGE IN THE WHITE HOUSE PRESS ROOM IS ONE OF THEM.

WHY is Chuck C. Johnson arranging meetings between Republican congressmen and Julian Assange to convince Trump to spring him from Ecuadorian embassy prison and give him a free ticket to the White House? And does CIA Director Mike Pompeo know about this? Because we seem to remember Pompeo recently calling Assange a literal Nazi. And does Attorney General Jeff Sessions know about this? Because we're pretty sure Sessions announced in April that it's a "priority" for his Justice Department to put Assange IN AMERICAN JAIL.

Fuck this, as it's making our head hurt worse than it already was.

Wonkette salaries are fully funded by lovely readers like you! If you love us, click below to fund us!