Clip And Save! It's Your Splendid Lawsplainer Of The Muslim Ban And The Courts! 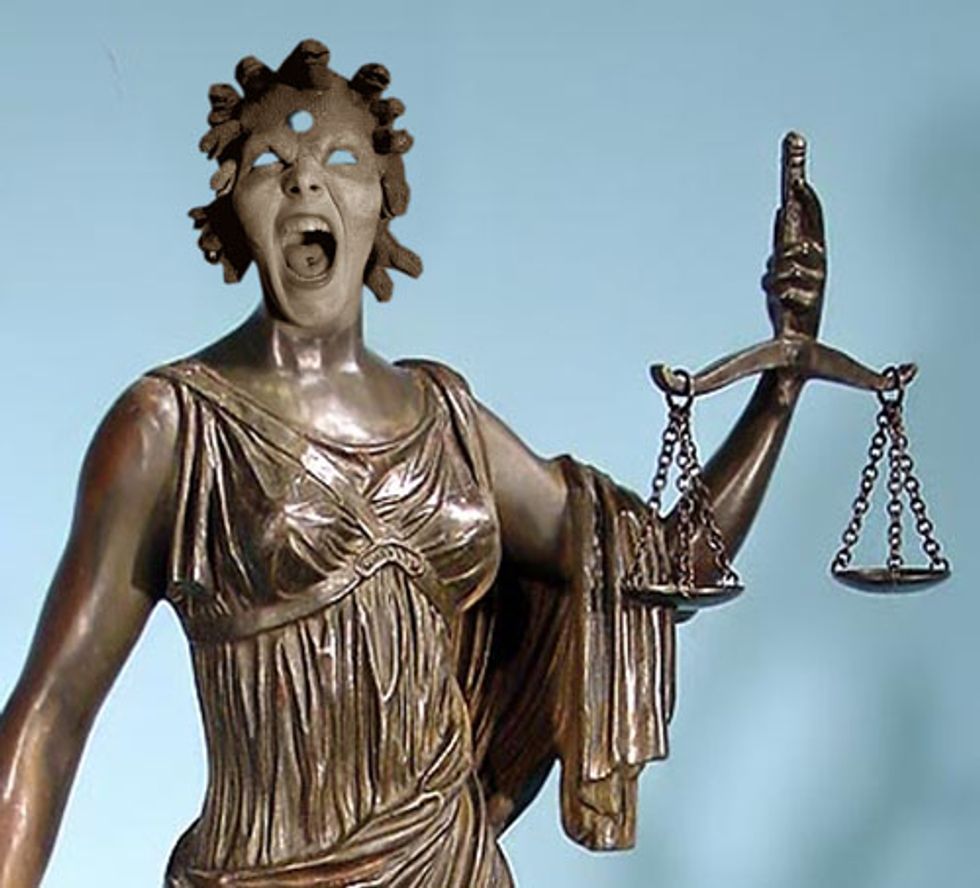 Wonkers! Who is confused about what the fuck is going on with The Case of the Muslim Ban? How can there be like 10 courts involved? What even is a TRO? And why do these Activist Judges hate America so much?

Way back on January 27, President Mar-a-Lago signed an Executive Order which was totally not at all drafted by Steve Bannon.

The Order banned refugees from Syria indefinitely, put a 120-day hold on other refugee admissions, and barred admissions of any non-US Citizens from Iran, Iraq, Libya, Somalia, Sudan, Syria and Yemen for 90 days.

Because consultation with lawyers and bureaucrats is for pussies, Trump and his crack team brewed up their own moonshine cocktail of bullshit and told the Department of Homeland Security to start serving it up right away.

Would current visa-holders from the affected countries be turned away at the border? Would Lawful Permanent Residents (LPRs) be allowed re-entry to the United States? Who would train Immigration Officials on the implementation of such a radical change?

Shut up, Commie! Take it from our Fearless Leader.

Except that here on Planet Earth, ALL HELL BROKE LOOSE!! Which we are not going to discuss ATM, since all members of the Wonketariat are WOKE. On to the Lawyerspeak!

By Monday, January 30, federal judges in Brooklyn, Boston, Virginia, Seattle and Los Angeles had all issued rulings along the lines of, "Holy Fucking Shit! Stop That Right Now!" Because they applied nationwide, the most important holdings came out of Brooklyn and Boston Courts. Together, they temporarily forbade Immigration and Customs Enforcement (ICE) from sending back or detaining at the airport any valid visa-holder or LPR.

Fun Fact: Many of these cases were Habeas Corpus Petitions, which are literally asking the state to GIVE US THE BODY YOU ARE HOLDING.

On January 29, White House Chief of Staff Reince Priebus arglebargled something about letting in green card holders after all, so no harm no foul, right?

The ACLU responded with a Bitch, Please! Motion.

On January 30, the State of Washington (later joined by Minnesota) filed a Motion for a Temporary Restraining Order in the United States District Court for the Western District of Washington.

In plain English, they argued that you can't spend 18 months shit-talking about the awesome Muslim ban you're planning, then pretend that your immigration order is not a Muslim ban. Also, too, we don't discriminate on the basis of religion or country of origin. It's kind of A THING here.

At first, the Justice Department was at a loss when Acting Attorney General Sally Yates (PBUH) refused to defend such a POS order. But then Trump fired her and got to work producing the awesomest legal brief ever!

"CAN, TOO!" He argued. "CUZ 9/11! AND I'M THE PREZNIT NOW!" Or words to that effect. Maybe they will come up with something better now that Jeff Sessions has been confirmed?

Spoiler Alert: They will not.

On February 3, Judge James Robart issued a Temporary Restraining Order (TRO) halting enforcement of the Executive Order nationwide and setting up a schedule for the Justice Department and States to present their arguments for and against it.

The opinion of this so-called judge, which essentially takes law-enforcement away from our country, is ridiculous and will be overturned!

What can you expect from a Liberal, Activist GWB appointee?!?!

Normally, TROs are not appealable. But Trump's SMRT legal team asked the Ninth Circuit to prettyplease pretend that Judge Robart's TRO was actually a Preliminary Injunction, which is appealable. And it worked! The Ninth Circuit was like, "Eh, okay." IRL Lawyers were like, WTF?!?! But, most importantly...

KellyAnne and Spicey were back in business! The NotBan was the legalest thing ever! SO. MUCH. WINNING.

After hearing oral arguments on February 7, the three-judge panel unanimously upheld the lower court's ruling that the Order likely violated the Establishment Clause (*cough* Muslim Ban *cough*). Also, they found that the States DO TOO have standing to sue, because they have an interest in keeping families together and staffing universities.

SEE YOU IN COURT, THE SECURITY OF OUR NATION IS AT STAKE!

On February 9, the Ninth Circuit told the States and the Department of Justice to start prepping to brief the Court on their arguments. Having decided that the TRO was magically a preliminary injunction, they weren't sending the case back down to the District Court for consideration.

The next day, Judge Robart also indicated that he'd like to see some briefs, too, thankyouverymuch.

The Clusterfuck Administration beat their chests about appealing to the Supreme Court for a while, then they made some noise about drafting a brand new Executive Order that would be the betterest yet. But they seem a little distracted the past couple days by the fact that their FORMER National Security Advisor may be a RUSSIAN SPY.

Fun Fact: The Ninth Circuit is "assigned" to Justice Kennedy for emergency motions. It's his call whether there is sufficient likelihood of a reversal to take the case.

Meanwhile, an unnamed Judge on the Ninth Circuit has filed a motion to re hear the case en banc, which means as a larger panel of the Chief Judge and 10 other Judges chosen at random. Whaaaaaaa???? Can they even do that?

Yeah, it's a thing. Mostly it happens at the request of the litigants, but very occasionally the judges ask for en banc review.

The wingnuttosphere has its own stupid theories about this one. The best explanation I have seen is that the Ninth Circuit is worried that Bannon and that little shit Stephen Miller will cook up a scheme to withdraw the Executive Order, thus mooting all the pending cases, and then replace it with something exactly the same. The Ninth Circuit can mull over its decision whether to rehear the case en banc indefinitely, which leaves the case "alive" to some degree, even if it is mooted by withdrawal of the original EO. So if the Trump Administration whips out a brand new EO that is substantially identical to this one, the Ninth Circuit gets first crack at it. Just a theory, but it's as good as any other.

Finally, let's all remember that NOT ONE OF THESE COURTS HAS ACTUALLY HAD A FULL HEARING OF THIS CASE ON THE MERITS YET!!! At every level, judges have ordered the government not to enforce the law for now. But one of these days, some Court is actually going to have to listen them argue this nonsense for reals.

Wonkette is one hundred percent supported by readers like you. SO COUGH UP, SUCKERS.